The global cruciate ligament repair procedures market size was valued at USD 8.4 billion in 2018 and is expected to register a lucrative CAGR of 9.3% over the forecast period. Cruciate ligaments are a pair of knee ligaments that cross each other and connect the femur to the tibia. The market is witnessing exponential growth owing to the rising number of sports-related knee injuries and increasing demand for minimally invasive procedures.

Knee injuries are among the most common musculoskeletal injuries, especially in athletes. Increasing participation in sports activities has led to a rise in the number of various injuries among athletes, thereby driving the number of knee surgeries being performed across the globe. As per our estimates, close to 2.5 million knee reconstruction surgeries were performed in 2018 and this is expected to grow at a lucrative rate over the forecast period. 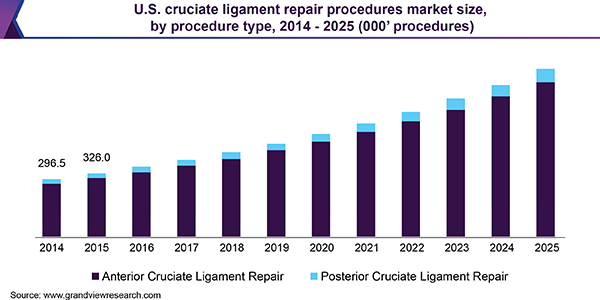 Sports activities are the leading cause of knee ligament injuries globally. Athletes are more prone to ACL injuries, which hinders their flexibility and mobility. According to an emergency room visit survey conducted by the Safe Kids Worldwide, more than a million young athletes visit hospitals for sports-related injuries every year worldwide. Furthermore, according to data reported by Michigan State University, around 46% of all knee injuries occur due to soccer, followed by basketball (42%), running (38%), and gymnastics (31%).

The high cost of knee-related surgeries, especially in emerging countries where the reimbursement rates are low, is a major challenge for patients. Patients with no or insufficient insurance coverage are expected to pay a higher cost for knee repair surgeries compared to those who are insured. Besides, they have to pay out of their pocket for other medical expenses, such as hospital admission and co-pay fees. Hence, the high cost associated with cruciate ligament correction surgeries is expected to limit market growth during the forecast period.
Moreover, increasing incidence of ACL injuries is fueling the need for cruciate ligament correction surgeries. According to the Aperion Biologics annual report, around 2.6 million ACL injuries are reported every year, out of which, around 800,000 ACL repair surgeries are performed per year across the world. Besides, increasing participation by younger people in sports activities and continual participation by players with a history of an ACL injury are some of the factors expected to propel the demand for ACL reconstruction procedures.

Based on the procedure type, the Anterior Cruciate Ligament (ACL) repair segment dominated the market in 2018 and was valued at USD 7.6 billion. This can be attributed to an increasing number of ACL injuries, poor healing capacity of ACLs due to local intra-articular conditions, and increased participation in physical activities and sports such as football, hockey, and basketball. Technological advancements such as the emergence of minimally invasive surgical techniques, which enable faster recovery and better procedure outcomes, will further reinforce the growth of the cruciate ligament repair procedures market.

Posterior Cruciate Ligament (PCL) is the strongest ligament in the human knee and PCL injuries are relatively uncommon among all the knee injuries. It can occur from a high-force impact to the knee or contact with an outside force. Therefore, the number of PCL repair surgeries is less compared to ACL correction procedures. According to the Sports Science Orthopaedic Clinic, the number of diagnosed PCL injuries is nearly 1/10th of the number of diagnosed ACL injuries in the U.S. every year. Apart from this, rising incidents of vehicular accidents and contact sports injuries are the major reasons driving the PCL repair segment. According to a study published by the Brazilian Journal of Orthopedics in 2013, around 73.8% of the total PCL injuries occurred due to traffic accidents.

Key regions included in this study are North America, Europe, and the Asia Pacific. North America dominated the cruciate ligament repair procedures market with an estimated 453,843 cruciate ligament surgeries performed in 2018. It is expected to grow at a significant rate over the forecast period, owing to rising healthcare expenditure and investments for developing healthcare infrastructure. Although cruciate ligament repair surgeries are costly, the availability of advanced healthcare services at affordable prices and the presence of developed reimbursement framework in this region is anticipated to boost their uptake. 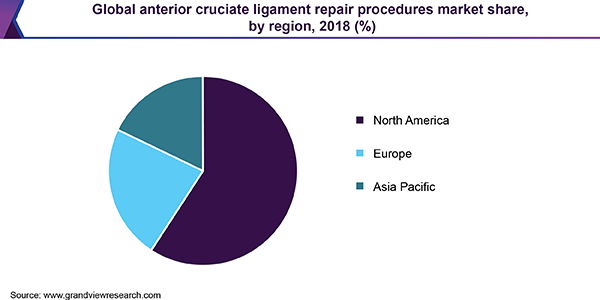 An increasing number of sports injuries in European countries is one of the key factors driving the regional market. According to the European Injury Data Base (IDB), about 4.5 million individuals aged 15 and above have been treated in hospitals for a sports injury in Europe. For instance, an estimated 48.2 injuries per 100 athletes were reported during the 2014 Sochi Winter Olympic Games. Hence, the rising incidence of sports injuries among athletes is fueling the cruciate ligament repair procedures market in the region.

Asia Pacific is projected to be the fastest-growing regional market throughout the forecast period. Numerous countries in the region have been observing a rise in geriatric population, who are highly susceptible to musculoskeletal disorders. According to the UN, the geriatric population in China is estimated to rise to 330 million in 2050 from 100 million in 2005. Apart from this, a growing focus on sports and physical activity has resulted in a rise in various injuries. This is also likely to boost ligament repair surgeries in the Asia Pacific.

This report forecasts procedures growth at global, regional, and country levels and provides an analysis of the latest industry trends in each of the sub-segments from 2014 to 2025. For this study, Grand View Research has segmented the global cruciate ligament repair procedures market report based on procedure type and region: