The global cryogenic tanks market size was valued at USD 5.7 billion in 2019 and is projected to expand at a compound annual growth rate (CAGR) of 4.9% from 2020 to 2027. The growth can be attributed to the growing demand for low-temperature operations in various end-use industries such as metal processing, healthcare, food technology, and others. The cryogenic tanks are specially designed to be used for keeping away the heat contained in the vessel from the liquid. The growing healthcare industry across the globe coupled with high R&D spending in the pharmaceutical industry is expected to further fuel the market growth. However, factors such as concern regarding cryogenic leakages and high capital costs may restrain the growth. 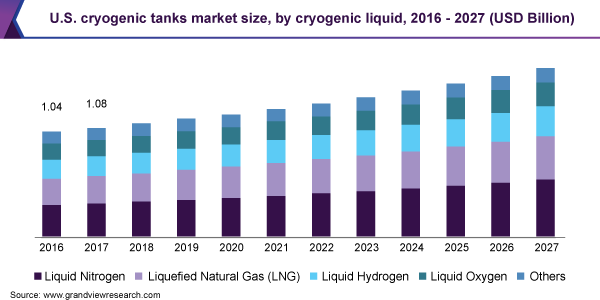 The U.S. accounted for the majority share in the North America cryogenic tanks market and this trend is projected to continue till 2027. The U.S. emerged as one of the major countries utilizing the product, as the country has presence of manufacturing facilities of major industrial gas suppliers such as Linde, Air Liquide, Messer, and Air Products & Chemicals. These companies utilize these tanks for storing and transportation of industrial gases from their manufacturing facilities to the end users. The growing healthcare industry in the U.S. coupled with rising R&D in the healthcare sector owing to a recent outbreak of pandemic is expected to propel the demand for liquid nitrogen cryogenic tanks in the U.S.

Presence of major food and beverage, metals and fabrication, and electronics companies in the U.S. is one of the major factors driving the demand in the market since these companies require cryogenic tanks to store industrial gases such as carbon dioxide, nitrogen, and others in their premises for application in their manufacturing facilities.

In the U.S., the usage of electronics is increasing day by day, as the world is getting modernized. The rising number of electronics and gadgets are being manufactured for the convenience of consumers. The Internet is also a major factor driving the growth of the electronics and consumer electronics market. Almost all major chores, including shopping for clothes, groceries, booking transportation tickets, movie and event tickets, are being done online via mobile devices and computers.

Based on the application type, the market is segregated into transportation and storage. In 2019, the storage application dominated the market with a revenue share of over 75%. Liquefied natural gas and industrial gases are typically stored in cryogenic tanks at various trading terminals, liquefaction facilities, and on-site industrial facilities. Thus, the storage segment is one of the vital applications of cryogenic tanks.

Increasing on-site designed storage facilities for LNG and industrial gases are some of the facts that are likely to fuel the demand for cryogenic storage tanks. Consistent innovation and improving the design of these tanks may provide industry participants with sufficient impetus for expanding the target application scope.

Cryogenic tanks used for transportation are designed to deliver liquid cryogens such as liquid nitrogen, liquid natural gas, and liquid hydrogen liquid oxygen to a customer site. These types of tanks are dimensionally fabricated to fit into enclosed vehicles and open bed trucks. The transportation application accounted for the second largest market share and is projected to expand at the second highest CAGR during the forecast period.

Based on end-user, the market is segregated into healthcare, manufacturing, food industry, and others. Manufacturing was the largest segment with a revenue share of around 35% in 2019. Liquid nitrogen is utilized to reduce working temperatures in construction and manufacturing activities, by means of chillers. The cryogenic liquid gas is rotated through these chillers to maintain the temperature at the desired level. The increasing industrial infrastructural development in regions including North America and Europe along with the rising technological advancements in regions such as the Asia Pacific is anticipated to drive growth in the near future.

Improvement in the healthcare sector across various developing nations has led to the growth of the market. Growing applications of cryogenics across laboratories and chemical plants coupled with collective usage of liquid nitrogen for transportation of beverages and frozen foods are the key growth drivers for the market. 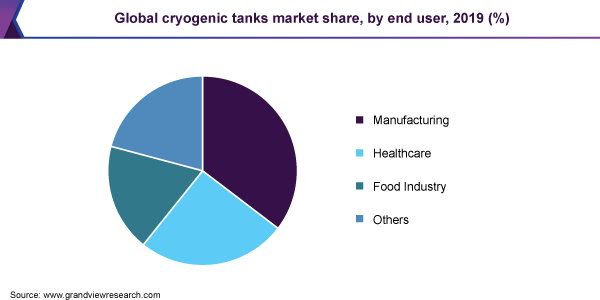 The Healthcare industry is projected to expand at the highest CAGR during the forecast period. The immense application of liquid nitrogen in the healthcare sector for curing various ailments and treating cancer is also expected to boost market growth over the next eight years. Treatments & surgeries carried out with the aid of liquid nitrogen have a prolonged and permanent effect as compared to other options such as salvage prostatectomy, brachytherapy, and High Intensity Focused Ultrasound (HIFU). Rising application in pharmaceutical R&D is further expected to fuel the demand for cryogenic storage and transportation tanks.

The Asia Pacific held the largest market share of over 30% in terms of revenue, in 2019. The region is projected to register the fastest CAGR during the forecast period, owing to the rising demand for industrial gases from various end-use industries in economies such as China and India. The growing metal processing, electronic, and automobile industries in both developing and developed countries is expected to propel the demand in the manufacturing industry. Increasing use of liquid nitrogen for refrigeration of the electronic products throughout the manufacturing process is projected to drive the market in upcoming years.

A shift in production landscape towards emerging economies, particularly China and India is expected to positively influence market growth over the forecast period. The region is home to several rapidly expanding industries Asia pacific is the world’s biggest consumer of LNG, which drive the regional demand to store and transport LNG. This factor is expected to positively influence the market for cryogenic tanks.

The industry is basically consolidated with major companies such as include Chart Industries, Cryofab, INOX India, Linde plc, Air Products, Wessington Cryogenics, FIBA Technologies, and ISISAN  accounts for majority of the market revenue share. These companies are frequently involved in escalating their product portfolios and increase their industry scope.

Mergers and acquisitions and other strategic collaborations are some of the other crucial strategies that are employed by the industry to augment market penetration. Other companies have a significant stake in the industry, such as Lapesa; M1 Engineering; Auguste Cryogenics; Gardner Cryogenic; Suretank; and Hoover Ferguson Group, Inc.; and Beijing Tianhai Industry co., Ltd. Some of the prominent players in the cryogenic tanks market include:

This report forecasts revenue growth at global, regional, and country levels and provides an analysis of the latest industry trends in each of the sub-segments from 2016 to 2027. For the purpose of this study, Grand View Research has segmented the global cryogenic tanks market report on the basis of cryogenic liquid, application, end-user, and region:

Which segment accounted for the largest cryogenic tank market share?

b. Asia Pacific cryogenic tanks market conquered the global demand accounting for the majority of the market share in 2019 and is projected to be the fastest-growing market, owing to the rising demand for cryogenic liquid in economies such as China and India for the various end-use industry.

How big is the cryogenic tank market?

What is the cryogenic tank market growth?

Who are the key players in cryogenic tank market?

What are the factors driving the cryogenic tank market?

b. The rise in demand for cryogenic tanks is attributed to the growing demand for low-temperature operations in various end-use industries such as metal processing, healthcare, food technology, and others. The growing healthcare industry across the globe coupled with high R&D spending in the pharmaceutical industry is expected to further fuel the market in the coming years.