The global D-dimer testing market size was valued at USD 1.2 billion in 2019 and is expected to grow at a compound annual growth rate (CAGR) of 4.3% from 2020 to 2027. A paradigm shift towards the demand for next-generation point-of-care D-dimer testing has driven the market. This is because the implementation of POC solutions significantly reduces waiting time, minimizes the length of patient stay, enables faster diagnosis, and results in improved patient experience. The resounding benefits gained from these solutions in POC settings are considered to boost the growth of the market for D-dimer testing. A rise in the incidence rate of Venous Thromboembolism (VTE) coupled with various pulmonary and cardiovascular diseases that cause life-threatening issues due to blood clot formation is increasing the demand for D-dimer testing. 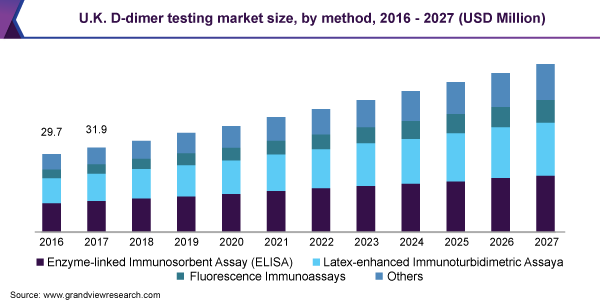 As per estimates of the Centers for Disease Control and Prevention (CDC), around 900,000 people are affected with VTE each year and nearly 60,000-100,000 Americans die due to VTE in the U.S. The advent of aptamers that can reduce the use of antibodies for D-dimer testing is proven to be a cost-effective and long-lasting approach in D-dimer testing. Aptamers are also affordable, stable, and faster to produce as well as possess a longer shelf life as compared to antibodies, thus creating lucrative opportunities for market growth. For instance, aptamers provided by Ayass Bioscience, LLC are observed to be useful in homogeneous assays and manual POC agglutination tests.

The effects of heterophilic antibodies on the estimation of the D-dimer level remain a big challenge in the clinical examination of cardiac and other diseases. This results in significant differences in the end results. Studies suggest that the combination of instrumental methods, incorporation of heterophilic antibody blockers along with clinical performance and imaging data can rule out this interference, thus pronouncing the need for further research in this sector.

In terms of revenue, the reagents and consumables segment dominated the market for D-dimer testing with a revenue share of 64.7% in 2019. Frequent purchase rate of reagents and kits along with the availability of a large inventory of ready to use reagents resulted in the estimated revenue share of this segment. In addition, the presence of highly-sensitive automated D-dimer assays that allow the safe exclusion of VTE in minimal time propels the segment growth.

In recent years, automated analyzers have gained immense popularity in the market for D-dimer testing and are anticipated to witness lucrative growth in the coming years. Several research studies have observed that the adoption of these analyzers considerably reduces the laboratory turnaround time and further accelerates clinical decision making. In addition, continuous R&D for expansion of the application scope of analyzers also positively impacts their usage rate.

For instance, in February 2019, Radiometer Limited stated that its AQT90 FLEX analyzers were successfully assessed for the D-dimer POCT in suspected lower limb deep vein thrombosis cases. The implementation of the AQT90 FLEX analyzer provided results in less than 21 minutes and had a significant impact on improving patient experience. The introduction of novel products or an extension of the products in POC settings is expected to drive the market for D-dimer testing.

The clinical laboratory tests segment dominated the market for D-dimer testing in 2019 and accounted for a revenue share of 61.6%. Highly sensitive D-dimer assays are commonly used for the exclusion of VTE and the management of disseminated intravascular coagulation. Conjugated use of these assays with a diagnostic algorithm inclusive of compression ultrasound and a pretest probability have shown greater success rate in clinical practices, which significantly contributes to segment growth.

Point-of-care (POC) tests are expected to witness the fastest growth rate in the near future owing to the emergence of several automated solutions that are ideal for near-patient testing. Intelligent design, user-friendly features, minimal maintenance, lower risk of biohazard and errors, and reduced turnaround time are among the few benefits associated with the usage of POC solutions.

Enzyme-linked Immunosorbent Assays (ELISA) held the largest revenue share of 36.0% in 2019 because it is a standard method for D-dimer testing. The advent of faster, automated, and highly sensitive modified ELISA assays have overcome the challenges pertaining to conventional ELISA assays as the latter are labor-intensive and time-consuming. Thus, the introduction of automated ELISA assays, such as the VIDAS  assay of bioMérieux SA, is driving the segment growth.

The Deep Vein Thrombosis (DVT) segment dominated the D-dimer testing market and accounted for a revenue share of 37.6% in 2019. DVT is a common medical condition that often goes undiagnosed and affects mostly hospitalized patients due to immobility. This leads to a rise in the incidence of DVT and an increased risk of complications associated with it. According to research studies, more than 200,000 people develop venous thrombosis every year in the U.S.

The risk of developing DVT is high in patients who have undergone different types of surgeries. Research studies have reported that patients undergoing spinal interbody fusion are highly vulnerable to develop lower limb DVT. DVT also results in longer hospital admission and drug treatment that can last for a few months, which subsequently adds to the total healthcare cost. Thus, early management of DVT is crucial, which raises the demand for D-dimer testing on a large scale.

D-dimer tests are used as a diagnostic test for acute disseminated intravascular coagulation (DIC). Despite the wide usage of these tests, there is limited data on the specificity of these tests in the diagnosis of acute DIC. Thus, continuous research and the advent of POC tests are expected to drive their utilization rate in the near future. Besides, early diagnosis of DIC facilitates sepsis management, which expands the adoption rate of D-dimer testing at the fastest CAGR for DIC.

The hospital segment captured the largest end-use share of 36.3% in 2019 owing to a rise in the hospital admission rates with an increase in the number of pulmonary embolism cases globally. In addition, as per the estimates of the British Lung Foundation, around half of the patients tend to develop a pulmonary embolism while they are hospitalized. 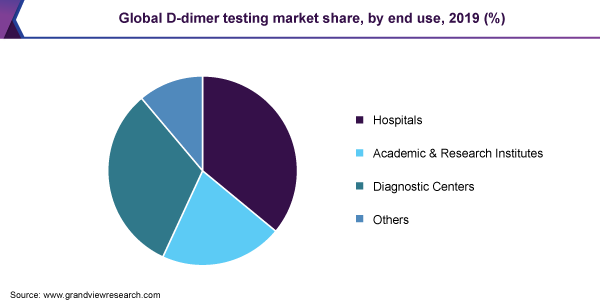 The diagnostic centers segment is anticipated to register a lucrative growth rate as these entities provide tests at a lower cost as compared to hospitals. Moreover, decreased patient wait time and improved patient satisfaction have led to great interest among the patients to undergo rapid POC D-dimer testing in diagnostic centers.

North America dominated the market for D-dimer testing with a revenue share of 33.2% in 2019. A large number of publications related to the applications of D-dimer expand the clinical utility of the coagulation testing in this region. Recently, a study published in January 2020, stated that the D-dimer protocol is beneficial in the identification of VTE of neurosurgical patients, and acts as a practical and cost-effective approach in VTE diagnosis.

The presence of regulatory guidelines for the management of VTE further propels the demand for coagulation tests in North America. The American Society of Hematology 2018 guidelines are intended to support the healthcare professionals and patients for the VTE diagnosis. These guidelines are based on the updated and original systematic reviews collected from researches, which further assess the evidence and make recommendations for VTE diagnosis.

In the Asia Pacific, the market for D-dimer testing is anticipated to witness the fastest growth rate during the forecast period due to the presence of supportive guidelines for coagulation tests laid down by the government and private organizations. The pathology manuals of the Royal College of Pathologists of Australasia (RCPA) provide useful guidelines for D-dimer testing. These manuals assist the healthcare providers and facilitate the interpretation of results, which surges the demand for these tests.

Key players are adopting strategic growth initiatives to reinforce their product offerings and maintain a competitive edge in the market for D-dimer testing. In addition, key players are involved in the development of sensitive as well as automated hemostasis markers for the expansion of market potential. For instance, in April 2019, Ortho Clinical Diagnostics, a U.S.-based company, launched its D-Dimer assay in collaboration with Diazyme Laboratories, Inc. This new assay is one of the latest product of MicroTip Partnership Assay Program of Ortho Clinical, which allow the company to provide high value, flexible, quick, and esoteric testing solutions. This product launch expanded the company’s expertise to offer innovative assay to its customers. Some of the prominent players in the D-dimer testing market include:

This report forecasts revenue growth at global, regional, and country levels and provides an analysis of the latest industry trends in each of the sub-segments from 2016 to 2027. For the purpose of this study, Grand View Research has segmented the global D-dimer testing market report on the basis of product, test type, method, application, end-use, and region:

How big is the D-dimer testing market?

What is the D-dimer testing market growth?

Which segment accounted for the largest D-dimer testing market share?

b. North America dominated the D-dimer testing market with a share of 33.2% in 2019. This is attributable to a large number of publications related to the applications of D-dimer that expand the clinical utility of these coagulation tests in this region.

Who are the key players in the D-dimer testing market?

What are the factors driving the D-dimer testing market?

b. Key factors that are driving the D-dimer testing market growth include a rise in the incidence of cardiovascular diseases, expanding applications of D-dimer tests, and technological advancements in D-dimer testing.