The global decaffeinated coffee market size was valued at USD 1.65 billion in 2019 and is expected to witness significant growth in the forecast period. Growing awareness related to the harmful physiological effects associated with caffeine, which is a psychoactive substance present in regular coffee, is expected to prompt the buyers to consume decaffeinated beverages. Over the past few years, various health studies have revealed that excessive consumption of caffeinated beverages leads to various problems, including jitteriness, restlessness, insomnia, and elevated blood pressure. As a result, buyers have been increasingly spending on caffeine-free beverages, such as decaf coffee.

In 2016, the National Institutes of Health (NIH) and Ohio State University jointly conducted a research study, which revealed that the chances of miscarriage increase with the intake of exceeding two caffeinated beverages a day by either of the parents. It was also reported that women drinking more than two daily caffeinated beverages during the first seven weeks of pregnancy also had an increased risk of miscarriage. Thus, the harmful effects of caffeine are compelling people to opt for decaf coffee over regular coffee. 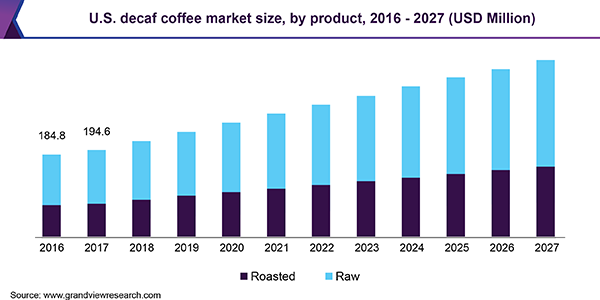 According to the 2017 National Coffee Association (NCA) report, people aged between 18 to 24 years formed the largest consumer group of decaf coffee in the U.S. and made around 19% of the total consumers. The survey also highlighted that 68% of the population thought that it is necessary to reduce their caffeine intake. Additionally, 66% agreed that it is essential to cut down their coffee consumption. This trend is expected to propel the demand for decaffeinated beverages in the years to come.

Millennials have been preferring organically and sustainably grown, decaffeinated, and lightly roasted coffee beans. Considering the growing demand for decaf coffee, a substantial number of cafés, coffee houses, restaurants, and eateries have begun to include items made of the aforementioned variants on their menu. Furthermore, popularity of these cafés and coffee houses among millennials, as a part of lifestyle trend for socializing and working in these spots, is expected to boost the business-to-business sales of the decaffeinated beverages.

Raw decaf coffee accounted for more than 60% share of the global revenue in 2019. This is attributed to its low price in comparison to the roasted counterparts. Soft aroma is also a key buying criterion among the buyers while purchasing raw decaf coffee. Growing popularity of home coffee roaster among buyers is also motivating people to opt for unroasted, raw, and green decaf coffee beans.

Roasted decaf coffee is expected to expand at the fastest CAGR of 7.4% from 2020 to 2027. Rising demand for this decaffeinated variant is credited to the enhancement of aroma and flavor caused by roasting. These products are comparatively higher priced than the raw decaf coffee. The cost of roasting adds to the product as it leads to the evaporation of moisture, thus making the beans lighter and crunchier.

Offline channel for decaf coffee is expected to remain the largest segment over the next few years. The choice of physical verification during purchase is expected to promote the utility of offline stores, including supermarkets, hypermarkets, and convenience stores. Additionally, improvement in urban infrastructure in emerging economies, including China and India, is expected to increase the number of offline stores in these countries. Due to the COVID-19 outbreak, the food service industry has been affected as majority of the restaurants and coffee shops are expected to be closed. Therefore, this trend is expected to negatively impact the demand for decaffeinated beverages from such outlets over the next few years.

Online channel is projected to witness the fastest growth over the forecast period in light of increased popularity of e-commerce channels as they offer products with add-on services, including discounted prices, cash-back offers, and coupon benefits. Furthermore, decaffeinated beverage manufacturers are projected to establish alliances with online companies in order to expand their buyer reach.

Arabica decaf coffee beans accounted for a share of more than 30% in 2019. This is attributed to the large cultivation and better availability of these beans. Furthermore, the content of caffeine in the variety is naturally less in comparison to the other decaf coffee beans, making the results of content decaffeination even better. This variety is also known to have a superior finished coffee flavor, aroma, and body. It’s naturally sweet and fruity flavor owing to high lipids and sugar makes it suitable for consumption with little to no sugar. 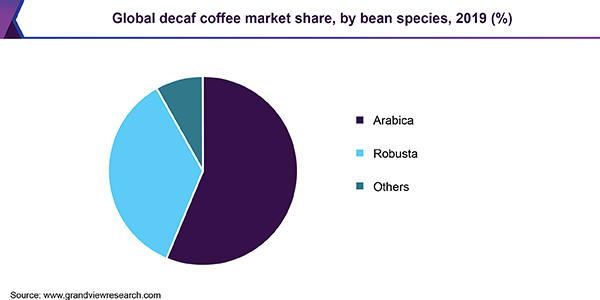 Robusta decaf coffee beans are expected to expand at the fastest CAGR of 8.1% from 2020 to 2027. Lower prices of these products are driving the demand for these variants. Vietnam and Indonesia are among the largest suppliers of these products on account of high concentration of coffee farmers at the domestic level.

Europe was the largest market, accounting for more than 35% share of the global revenue in 2019. High popularity of coffee in the region, along with growing awareness among people regarding the side effects of caffeine, is promoting the sales of the product in Europe. According to the International Trade, decaffeinated variant accounts for around 8% of the total coffee consumption in Germany.

Asia Pacific is expected to register the fastest CAGR of 8.2% from 2020 to 2027. This growth is attributed to rising health consciousness among the residents of countries, including India, Indonesia, and Japan. The sale is estimated to increase during the forecast period as the market is witnessing high demand for decaffeinated beverages in Japan in the form of black tea and green tea.

Some of the key players in the market are SWISS WATER DECAFFEINATED COFFEE INC.; LifeBoost Decaf; Cafe Don Pablo Colombia Supremo Decaf; No Fun Jo Decaf; Fresh Roasted; and Volcanica Coffee Costa Rica Tarrazu Decaf. Companies have understood the potential of the market and they are doing aggressive marketing of the product in order to further enhance their growth. Many manufacturers who were already supplying conventional coffee have also included decaffeinated variants in their product mix to leverage the growth and retain their customers. The pre-built supply chain and brand awareness are also expected to be beneficial for the decaffeinated coffee market.

This report forecasts revenue growth at the global, regional, and country levels and provides an analysis of the latest industry trends and opportunities in each of the sub-segments from 2016 to 2027. For the purpose of this study, Grand View Research has segmented the global decaffeinated coffee market report on the basis of product, bean species, distribution channel, and region: