Global decorative coatings market size was 21,473.1 kilo tons in 2014 and is expected to witness significant growth over the next seven years owing to increasing use in construction applications across various countries including China, U.S., Mexico, Qatar, UAE, India, Vietnam, and Singapore.

Rising demand for these products in buildings as it enhances durability and appearances of the surface as well as protecting it from harsh weather and external conditions such as UV radiation, extreme temperature, acid rain, and foreign particles will augment growth. In addition, superior properties including moisture, corrosion resistance, UV radiation, bacteria, and heat resistance is expected to fuel industry growth over the forecast period. 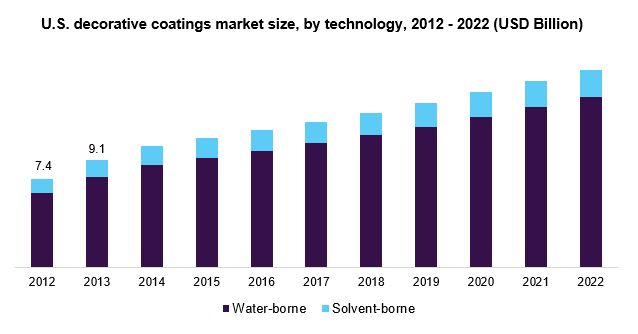 Rising demand for eco-friendly waterborne coatings in emerging economies of China and India is likely to propel industry development. An increasing number of joint ventures among various key coating participants and local manufacturers in Asia Pacific is likely to develop the market over the projected period. Also, infrastructure development in emerging economies of Asia Pacific coupled with rising spending in current fiscal budgets by the government of India and China is a key factor responsible for high demand.

Stringent environmental regulations on VOC emissions in North America and Europe are expected to drive the waterborne technology market over the forecast period. However, variation in raw material prices including alkyd, epoxy, acrylic, and titanium dioxide is expected to restrain growth. Furthermore, harmful environmental effects by solvent-borne coatings are expected to serve as a key market challenge over the next seven years.

Technological advancement including Nano-TiO2 photocatalysts, green coatings, and introduction of methods to reduce drying time is expected to propel growth over the forecast period. Increasing R&D investments along with ongoing product development to improve the performance of these products will stimulate market growth over the next seven years.

Rapid infrastructural development in the form of shopping malls, housing complexes, and office buildings in emerging economies of India, China, Brazil, and South Korea is estimated to fuel decorative coatings industry growth in the near future. Growing coatings demand from DIY consumers is expected to gain market share in the near future.

Furthermore, the development of new waterborne coatings having different formulations by various companies to impart antibacterial and anti-odor properties is expected to augment market growth over the next even years. In addition, the introduction of nanocoatings, along with green coatings, is expected to drive market growth over the next seven years.

Increasing investment by companies, along with the growing number of coatings production facilities in Brazil is expected to stimulate the market for decorative coatings. Emerging Southeast Asian economies of Malaysia, Thailand, and Singapore are projected to witness surging growth owing to increasing commercial establishments, including business parks and shopping malls. However, volatile raw material prices are expected to restrict market growth over the next seven years.

Waterborne coatings are expected to witness rapid growth, in terms of volume, at a CAGR of 6.5% from 2015 to 2022 as a result of its excellent adhesion, heat resistance, and abrasion properties. Moreover, its advantage over solvent-borne including less toxicity, less flammability, along with the reduction of air emissions is expected to augment demand over the forecast period.

Solventborne technology is expected to lose its market share considerably over the forecast period as it contains VOCs and Hazardous Air Pollutants (HAP) including toluene, ethylbenzene, xylene, and methyl ethyl ketone and is expensive. Solventborne coatings demand is expected to exceed 7,100.0 kilotons by 2022.

Emulsions were the largest product segment in 2014 and accounted for over 35% of the market volume share and are expected to witness significant growth owing to its low VOC and VAC content, making it environmentally friendly. In addition, non-flammability, easy handling, and storage will stimulate its demand over the forecast period. 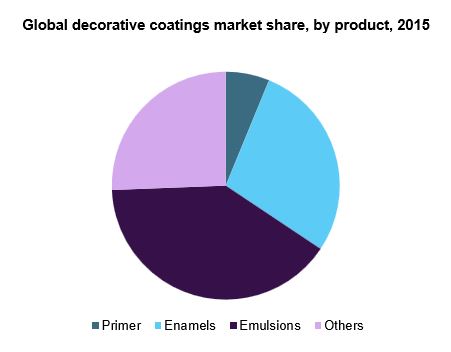 Primer is expected to witness lucrative growth over the forecast period as it acts as a leveler and protector thereby making coatings smooth. Demand for primers is expected to exceed 2,150.0 kilotons by 2022.

Residential was the largest application segment in 2014 estimated at USD 40.31 billion. It is expected to witness high gains over the next seven years on account of increasing government spending, fast-growing population, and continuous progress on infrastructure projects. In addition, rising trend of DIY among consumers will augment consumption for residential applications over the next seven years.

Asia Pacific decorative coatings market was valued at USD 20.23 billion in 2014, dominating the global market, in terms of volume as well as value. This trend is expected to continue on the account of increasing construction spending along with rapid economic development in China, India, Indonesia, South Korea, and Thailand. China is expected to drive the regional demand as a result of growing domestic producers along with increasing infrastructure sector.

MEA is expected to witness substantial growth with CAGR exceeding 6% from 2015 to 2022 on account of rising construction activities mainly in UAE and Qatar due to economic recovery, advanced real estate regulatory framework, and increasing infrastructure project.

Bayer AG provides environmentally friendly systems that can reduce emissions by up to 90%. In November 2014, Nippon Paints developed CyGLAZ technology to increase the laminate duration of the paints.