The global Digital Dose Inhaler Market was valued at over USD 839.4 million in 2015. The key reasons contributing to the segment’s high growth include the upsurge in the prevalence of chronic respiratory diseases, such as obstructive sleep apnea (OSA), asthma, Chronic Obstructive Pulmonary Disease (COPD), respiratory allergies, and others.

Based on the estimates published by the WHO in 2015, approximately 6% of the global deaths occur due to COPD, accounting for over 3 million people worldwide. These estimates also suggest that in 2015 more than 90% of the COPD deaths occurred in the low and middle-income countries. Furthermore, the soaring geriatric population afflicted with respiratory disorders of both, severe and mild forms, is another key determinant expected to reinforce the demand for these new generation inhalation devices over the forecast period. 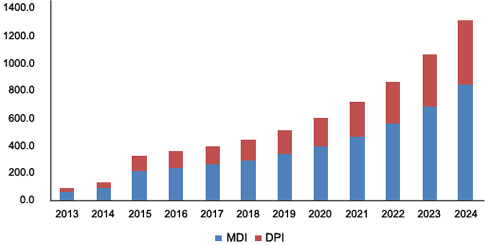 The wide-ranging technological advancements are revolutionizing the inhalation therapy devices, which include the metered dose inhalers equipped with an e-dose counter, internet connected and compact inhalers, among others that are spurring the Digital Dose Inhaler Market growth. The medical device manufacturers are increasingly focusing on the connectivity technologies to improve patient medication adherence and to ensure the administration of appropriate dosage. The growing demand for technology-enabled features including seamless data transfer, and patient tracking are crucial determinants that are expected to provide a fillip to the usage rates of these respiratory devices over the forecast period.

Furthermore, the favorable reimbursement policies available to the patients in the form of government sponsored Medicare and Medicaid plans, individual insurance policies, group association policies, and employee policies are expected to boost the treatment rates for asthma, COPD, and other respiratory disorders; altogether these developments are expected to aid the emergence of the Digital Dose Inhaler Market over the forecast period. The increasing per capita income as a result of the development in the fast emerging economies of India, China, and Brazil, and the subsequent rise in the disposable income is expected to additionally reinforce the market expansion.

This market is segmented into metered dose inhaler (MDI) and dry powder inhaler (DPI). In 2015, the MDI segment accounted for the maximum share of 67.2% owing to the soaring healthcare expenditure levels, growing prevalence of chronic heart diseases, and extensive availability of MDIs. Moreover, consistent technological advances pertaining to the development of inhalation medication, such as mechanistic pharmacokinetic/pharmacodynamics (PK/PD) modeling, patient-feedback features in electronic monitoring systems, controlled-release formulations, and nanotechnology-based formulations with high drug loads enclosed in smaller dose sizes are some of the pivotal factors, among others, involved in improving the therapeutic efficacy of the medication and in impacting the overall patient compliance patterns that are expected to accelerate the product uptake over the forecast period.

However, the DPI segment is expected to capture the highest CAGR of 16.9% over the forecast period. Concerns related to the incidences of drug irritation caused by the presence of propellant components, such as chlorofluorocarbons (CFCs) in MDI, have favored the adoption of the DPIs, with fewer irritant effects while delivering comparable therapeutic efficacy as MDIs.

Additionally, the growing awareness regarding the benefits of combination respiratory medication (corticosteroids and bronchodilators) systems coupled with the increased emphasis being laid on ensuring better patient medication compliance while simultaneous efforts are directed toward reducing the patient burden related to tracking medication use, are the pivotal factors that are expected to advance the usage rates of these digital respiratory devices, thereby driving the digital dose inhaler market over the forecast period.

In 2015, the branded medication segment accounted for the maximum share of 89.1% owing to the steep rise in the healthcare expenditure levels and the surge in demand for new respiratory medication development. The estimated penetration rate of these branded drug inhalation devices over the forecast period would be attributable to the consistent technological advances pertaining to the development of inhalation medicines and the escalating number of branded drug inhalation devices.

However, the generic medication segment is expected to have the highest CAGR of 18.4% in the near future. The rising awareness regarding the benefits of generic drugs and the high demand for cost-effective medications are some of the factors expected to significantly augment the Digital Dose Inhaler Market over the forecast period.

In 2015, North America accounted for the majority share of nearly 38.6%. This is attributed to the rigorous research and development activities, coupled with high awareness regarding the currently available, hi-tech respiratory devices. In addition, an upsurge in the prevalence of respiratory conditions among both, the pediatric and the elderly population will further favor the market growth.

However, the Asia Pacific region is expected to grow at a maximum CAGR of 17.2% during the forecast period. Japan and China constitute the key identified hubs for the respiratory devices vertical. Enhanced demand for innovative respiratory care devices, increasing geriatric population burden, upward shift in the aggregate healthcare expenditure, and the rapidly transforming healthcare sector are among the crucial factors that are expected to stimulate the Digital Dose Inhaler Market growth. Moreover, the presence of favorable government initiatives, such as “Make in India” campaign, which provides startup companies with subsidized land rates to establish their manufacturing units and various other additional incentives in the form of tax sops and exemptions from electricity tax, excise, and import duties for the first few years are expected to provide a stronger impetus to the expansion of this sector in the next few years.