The global digital health market size valued at USD 95.8 billion in 2018 and is expected to grow at a compound annual growth rate (CAGR) of 27.7% from 2019 to 2025. Rising demand for remote monitoring services due to increasing incidences of chronic diseases across the globe is one of the factors propelling the growth of the market. Moreover, significant rise in the penetration of smartphones and other mobile apps among healthcare practitioners and physicians to track and access medical information is driving the market. 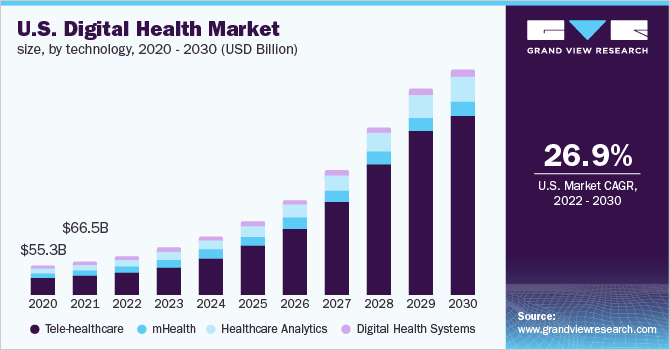 Significant rise in the number of health apps is also one of the factors that have propelled the growth of the market. For instance, according to the data published by myhealthapps blog, as of 2017, there were 325,000 medical, health, and fitness apps in the market. Wherein, health apps promote effective communication between patients living in remote areas and healthcare providers. Moreover, the usage of mobile devices is rising among physicians. For instance, according to HIMSS Mobile Technology Survey, in 2015, 90% of the survey respondents were using mobile devices for patient engagement. The same survey reported that 40% of physicians believed mHealth can reduce the number of visits to the physician’s offices. Thus, rising importance of mobile devices and mHealth for improving health outcomes and patient care is positively impacting the market growth.

Favorable initiatives and technological advancements for developing innovative digital solutions are some of the key factors driving the market. For instance, in October 2015, in Tasmania, an app named AirRater was launched that tracks signs of people and alerts them about the air-borne pollutants, such as pollen. Furthermore, this app was established by researchers at the University of Tasmania and was sponsored by Sense-T through support from the government of Australia.

Government initiatives such as awareness programs and R&D funding for healthcare IT are anticipated to boost the mHealth market growth. For instance, in 2016, the Indian government launched four new mHealth initiatives, namely, Kilkari, M-Cessation, Mobile Academy, and TB Missed Call Initiative, as a part of its Digital India program. These initiatives were aimed at enhancing access to medical care. Moreover, in 2016, Philips announced an agreement with Sijunjung Regency, Indonesia, for commercial implementation of telehealth service called Mobile Obstetrics Monitoring (MOM), which is an app-based software solution delivered via smartphones. This app is designed for reducing maternal mortality through digitization to ensure risk stratification and early monitoring.

In 2018, mHealth accounted for the largest market share of 56.7% and is expected to expand at the fastest CAGR of 34.0% over the forecast period. This is attributed to several factors such as high internet usage, increased penetration of smartphones, and availability of a large number of mHealth apps in the market. In addition, recent advancements in wearable technologies and increasing prevalence of chronic diseases, such as cardiovascular diseases and diabetes, are significantly contributing to the segment growth.

Additionally, growing penetration of smartphones and internet connectivity and rising adoption of mHealth technologies by physicians and patients are the key factors driving the mHealth segment. According to the statistics published by GSM Association’s report, The Mobile Economy 2018 stated that the number of people connected to mobile services surpassed 5.0 billion in 2017, and the number of unique mobile subscribers is expected to reach 5.9 billion by 2025. Furthermore, increasing trend of preventive healthcare and rising funding for mHealth startups are some of the other factors boosting the market growth.

Digital health systems generated the second largest revenue in 2018. This is attributed to increasing government initiatives to promote digital health, which, in turn, has increased the adoption of digital systems among healthcare systems. For instance, the Digital India program launched in 2015 helped in increasing the adoption of hospital information systems across hospitals in India. In addition, improving healthcare infrastructure and increased healthcare expenditure in developing countries are expected to fuel the growth of the digital health systems segment.

In 2018, services accounted for the largest market share of 47.7% owing to factors such as rapid advancements in hardware and software and increase in the number of software upgradations. These services comprise various activities including installation, training and integration, and upgradation. Furthermore, growing demand for software platforms such as electronic health records (EHR) propel the demand for services as companies are increasingly focusing on providing post-installation services, including training, optimization, staffing, clinical, and other services. 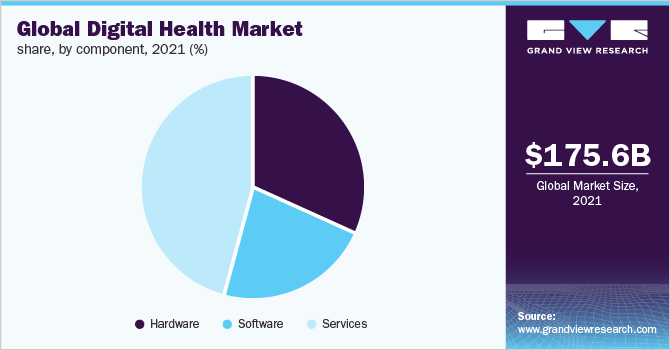 Rapid technological advancements and increasing penetration of wearable devices are the key factors driving the demand for hardware in the market. According to an article published by Forbes, in 2015, around 15.0 million of wearable devices were shipped and 125.0 million units are expected to be shipped in 2019. Rapid launch of new products in the hardware space is also contributing to the market growth. Some of the major players operating in this space are Apple, Inc.; Omron Corporation; Fitbit, Inc.; and Koninklijke Philips N.V.

North America generated the largest revenue of USD 38.2 billion in 2018. This is majorly attributed to factors such as rapid growth in adoption of smartphones, advancements in coverage networks, rise in the prevalence of chronic diseases, and increase in geriatric population. For instance, according to the United Nations World Population Ageing Report 2015, the total percentage of people aged 60 and above in North America is estimated to reach 28.3% by 2050.

Furthermore, government aid and collaborations are prompting app developers and healthcare providers to come up with better digital solutions. For instance, in 2016, the U.S. government’s Health IT venture funded developers with approximately USD 1.3 billion for the introduction of new mobile healthcare applications. Moreover, some of the major players in the North America digital health market operating in different streams like mobile health, smart wearables, and EHRs are Apple, Inc.; AT&T; Google; Airstrip Technologies; Cerner; Epic; and AllScripts.

Asia Pacific is expected to witness lucrative growth over the forecast period owing to increasing penetration of smartphones and smart wearable devices and rising adoption of mHealth services. Medical device companies are increasingly collaborating with software developers to develop various monitoring and diagnostic applications, enabling the population to easily communicate with healthcare physicians. Emerging economies such as Malaysia and Thailand are also encouraging the development of low-cost mobile technology.

Players are undertaking strategic initiatives to gain maximum market share. For instance, in March 2017, McKesson Corporation announced the completion of the previously-announced agreement with Change Healthcare Holdings, Inc. to form a new healthcare IT company named Change Healthcare. Some of the prominent players in the digital health market include:

This report forecasts revenue growth at the global, regional, and country levels and provides an analysis of latest industry trends in each of the sub-segments from 2014 to 2025. For the purpose of this study, Grand View Research, Inc. has segmented global digital health market report on the basis of technology, component, and region:

How big is the digital health market?

What is the digital health market growth?

Which segment accounted for the largest digital health market share?

b. mHealth dominated the digital health market with a share of 56.7% in 2019. This is attributable to high internet usage, increased penetration of smartphones, and availability of a large number of mHealth apps in the market.

Who are the key players in digital health market?

What are the factors driving the digital health market?

b. Key factors that are driving the market growth include increasing adoption of digital healthcare, favorable initiatives, and technological advancements for developing innovative digital solutions.

High incidence and infectious nature of nCOIVD-19 virus have infected a large number of frontline healthcare providers resulting in a significant shortage of doctors and nurses. Furthermore, due to infrastructural challenges, such as the limited number of beds in quarantine facilities, a large number of patients with mild symptoms are home quarantined. To monitor this large patient population with limited healthcare staff, many hospitals are adopting digital health solutions, which is quite evident in recent market movements. We are closely analyzing the impact of this pandemic on the digital health market. Get your copy now to gain deeper insights on the same.