The global distributed natural gas-fueled generation market size was USD 11.20 billion in 2015. Factors such as stringent environmental standards to reduce carbon footprint, demand for reliable power, and decreasing costs of onsite generation relative to alternatives like grid power is expected to fuel market growth in the future. DNGG technology is cleaner than diesel or coal-fueled generation and unlike renewable, does not depend on the wind or solar energy for the production of power.

Countries with policies that encourage clean energy are most likely to have rising fuel cell markets. In the U.S., various Department of Energy (DOE) initiatives sustain the growth of fuel cell technologies, with the objective of making them price competitive.

The DNGG market is anticipated to witness an upsurge in the adoption of fuel cell technologies, owing to rising usage of cleanest fossil-fueled natural gas in the power generation sectors. The increasing use of DNGG in gas fields will accelerate market growth over the forecast period.

The distributed natural gas-fueled generation market is anticipated to witness an upsurge in the adoption of fuel cell technologies, owing to rising usage of cleanest fossil-fueled natural gas in the power generation sectors. The increasing use of DNGG in gas fields will raise the future market over the forecast period.

Owing to lower efficiencies and higher cost as compared to other distributed power technologies, fuel cells need additional technical and commercial advances to become more competitive. Companies are highly involved in advanced fuel cell technologies to sustain in the market and to produce clean power which is of high demand in the power sector and can cater to future market demand. For instance, Bloom Energy Solution Company created a fuel cell technology where they produce the clean power of digital quality and reliability for over 100 fortune companies

NG gensets technology dominated the global demand accounting for over 75% of the total revenue in 2015. High growth of this segment can be attributed to suitability for remote areas coupled with their effective solution for growing energy demand and tackling power shortages.

Microturbines are expected to emerge as one of the fastest-growing segment and reach a net worth of USD 2.05 billion by 2024. R&D in this segment will improve efficiency, reduce capital costs and is therefore expected to increase adoption particularly in residential and building & institutions to make them more competitive as distributed power generation technology

In the past, companies were involved in developing fuel cells based on relatively conventional energy and they proved to be more expensive for homes. However, at present, they are engaged in new materials that could cut costs by almost 90%.

The distributed generation from stationary fuel cells has significant benefits such as, it exhibits high-energy efficiencies that attain considerable primary energy savings by avoiding transmission losses.

The commercial and industrial segment dominated the global demand accounting for over 67.1% of the total revenue in 2015. Industries are in need of continuous power supply to maintain the flow of the process. Power voltage and outages drop not only affect the pace of work but also lead to malfunctioning of equipment which leads to operational and monetary loss. Hence, fueled generators are used in such industries to support specific equipment. 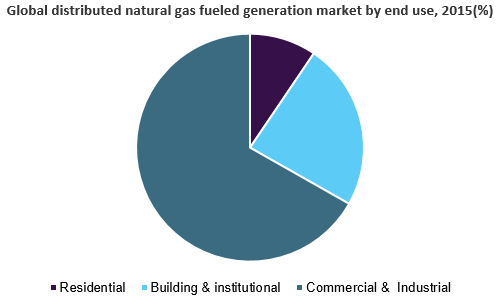 Building & institutional segment is anticipated to emerge as the fastest growing segment and reach a net worth of USD 8.41 billion by 2024 owing to the expansion of cities, particularly in emerging economies

Asia Pacific regional market dominated the global demand and is expected to grow at a CAGR of 13.1% over the forecast period. Infrastructure development in China and India coupled with favorable regulatory policies to adopt DNGG and is likely to augment demand in the near future.

Europe's regional market accounted for over 35% of global demand in 2015. Regulations such as the announcement of The Energy Efficiency Directive (2012/27/EU), which aims at achieving 20% efficiency target by 2020 is anticipated to force power generation players at the domestic level to employ these generators in the future.

In addition, The European Commission framed Horizon 2020 Strategy in 2007, which aims to reduce greenhouse emissions and utilize sustainable methods. Another regulation, Clean Development Mechanism has been introduced particularly for the manufacturing sector to reduce global warming potential. These crucial factors are anticipated to favor market growth in the region

The companies are trying hard to get cleaner energy from a compact fuel-cell generator, at costs cheaper than power from the grid. Companies like Redox Power Systems are involved in rising fuel cells that feed on diesel, propane, or natural gas. Players in the market are investing in improvements to their electrical systems, utilizing existing technologies coupled with making smart policy decisions. Key players operating in the market include General Electric, MWM GmbH, ABB Group, Cummins Inc, Plug Power System, Shandong Lvhuan Power Equipment Co., Ltd.

There are additional costs such as new technology licensing and construction activities that are associated with the integration of distributed natural gas technologies into existing distribution networks. Companies are involved in technological innovations to reduce the cost of distributed power technologies by increasing their performance and flexibility. Plug Power, Inc. announced an expansion contract with Walmart Canada to provide 124 GenDrive fuel cells for its new High Velocity Distribution Center building in Balzac, Alberta, Canada. This expansion added to the fleet in operation since 2010, and increased the GenDrive total over 230 units at the site.

This report forecasts revenue growth at global, regional & country levels and provides an analysis of the latest trends in each of the sub-segments from 2014 to 2024. For the purpose of this study, Grand View Research has segmented the Distributed Natural Gas-Fueled Generation market on the basis of technology, end-use, and region: