The global dried blood spot collection cards market size was valued at USD 257.3 million in 2018 and is expected to grow at a compound annual growth rate (CAGR) of3.5% from 2019 to 2026. Dried blood spot (DBS) is a minimally invasive method used for the collection of small quantities of blood from heel stick or finger with an application that is specific to the filter paper used for testing. Samples of DBS do not require phlebotomy and can be stored as well as shipped under ambient conditions. Some of the major clinical applications of DBS include newborn screening (NBS), therapeutic drug monitoring, HIV surveillance, and clinical chemistry applications. Other basic research applications for DBS include biomarker validation, biomarker development, drug discovery & development, systems biology, and forensic science among others. 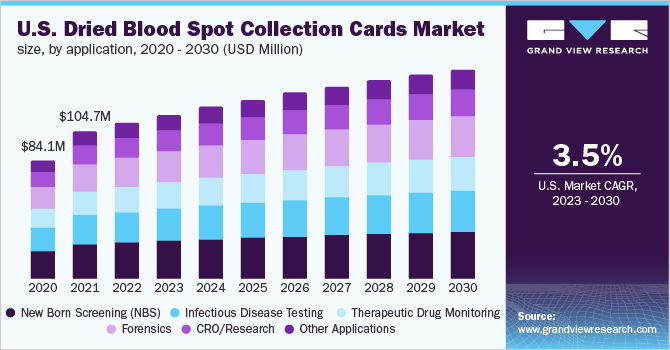 The use of DBS cards in newborn screening is expected to boost market growth during the forecast period. One of the widely and commonly accepted clinical use of DBS includes newborn screening programs that focus on the detection of metabolic disorders. This method provides a faster alternative as it avoids retesting of the infant. This is critical as many conditions screened for newborns require diagnosis at early stages. These dried spots can also be made available to parents for further health-related tests of their newborns.

An increase in the usage of DBS for serological diagnostics of infectious or autoimmune diseases is expected to fuel dried blood spot collection cards market growth. According to the WHO, it was estimated that around 37.9 million individuals were diagnosed with HIV globally in 2018. Additional data from the same source states that approximately 770,000 HIV related deaths were recorded globally in 2018.

The use of DBS provides early & effective diagnosis, facilitates the easy collection, storage, and also proves to be a highly convenient alternative to plasma-based testing in settings with a limited laboratory capacity. Various nations have implemented the usage of dried blood spot testing for HIV, for instance, the New South Wales Ministry of Health in 2016 announced the launch of the DBS HIV Testing Project to improve access to HIV testing. The NSW HIV Strategy 2016-2020 aims at eliminating HIV by 2020 with the incorporation of DBS technology.

DBS is also being increasingly used in applications of toxicology such as epidemiology, toxicokinetics, and environmental toxicology. The potential of easy, prompt sampling, and increased stability offered by DBS sampling is expected to fuel the market growth during the forecast period.

Based on card type, the market is segmented into Whatman 903, Ahlstrom 226, FTA, and others. Whatman 903 held the largest market share in 2018 as they provide an efficient and safe method for easy sample identification, collection, and transport. Eastern Business Forms Inc. provides 903 Five Spot Blood Card, which is ready to use and also saves cost and time during sample transport, collection, and archiving. 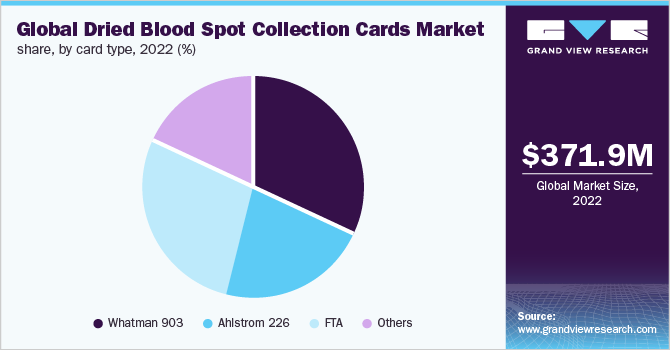 Ahlstrom 226 blood collection cards are also expected to fuel market growth as they offer precision, simplicity of collection, storage and transport, reduced material input and waste, and good reproducibility among others. Therefore, a rise in the use of Ahlstrom 226 for NBS and other diagnostic applications is anticipated to propel the market growth during the forecast period.

FTA cards are expected to witness lucrative growth during the forecast period as they provide convenience and rapid test analysis for research activities. It usually combines DNA preservation at long term room temperature with an easy elution that facilitates the user to create multiple amplification from a single sample. Additionally, it requires 5-30 minutes of sample processing time to isolate DNA. Qiagen provides an FTA Classic Card that has a wide range of applications such as plasmid screening, food, and agriculture testing, genomics, forensics, transgenic identification, drug discovery, STR analysis, whole genome amplification, and molecular biology among others.

North America held the largest revenue share in 2018 as newborn screening for infants is mandatory in the U.S. and Canada. According to the National Institute of Children’s Health Quality in 2016, NBS was routinely performed on more than 4 million newborns in the U.S, with most of the states reporting participation rates of 99.9% or higher. Data from the Centers for Disease Control and Prevention indicate that approximately 12,500 infants are diagnosed annually with at least one core condition through these screening programs.

Several collaborations have been undertaken by the U.S. government to facilitate improved newborn screening testing facilities, thereby creating awareness regarding the same. For instance, in February 2016, the National Institute for Children's Health Quality developed a national collaborative program called the NewSTEPs 360 program, wherein various improvements were done across 20 states in the U.S. Through the program, these states were supported with a fund of USD 5.4 million from the Health Resources and Services Administration (HRSA). NewSTEPs 360 is a collaboration between the Association of Public Health Laboratories and the Colorado School of Public Health.

The European region is also expected to boost market growth due to the increasing prevalence of hepatitis B. According to the European Centre for Disease Prevention and Control, it was estimated that approximately 26,907 individuals were diagnosed with hepatitis B, with a prevalence rate of 6.7 cases per 100,000 individuals in 2017. DBS is also widely used for the early diagnosis of hepatitis B as it is a convenient tool that offers wide logistical advantages over the conventional venous blood sampling methods and also enables easy handling as well as transport. Thus, an increase in the incidence of hepatitis B is expected to boost market growth.

The Middle East and African region are also anticipated to witness lucrative market growth during the forecast period. The blood diagnosis industry is mainly based on venous and capillary puncture which is focused mainly on the developed regions as they are expensive and require many instruments. However, for developing economies, the cost of these tests is unaffordable. DBS eliminates cold chain requirements that further result in cost savings and saves universal lab service coverage in the Middle East and African countries thus boosting the market growth.

Rise in product launches by market players is anticipated to fuel market growth. For instance, in June 2019, Ahlstrom and GenTegra LLC announced the launch of the DBS collection card. This card provides superior protection for DNA in DBS for more than 20 years without freezing. Therefore, an increase in product launches by major market players is expected to increase the demand for DBS during the forecast period. Some of the prominent players in the dried blood spot collection cards market include:

This report forecasts revenue growth at global, regional & country levels and provides an analysis of the industry trends in each of the sub-segments from 2015 to 2026. For this study, Grand View Research has segmented the global dried blood spot collection cards market report based on application, card type, and region:

How big is the dried blood spot collection cards market?

What is the dried blood spot collection cards market growth?

Who are the key players in dried blood spot collection cards market?

What are the factors driving the dried blood spot collection cards market?