The global drilling fluids market size was valued at USD 7.7 billion in 2021 and is anticipated to expand at a compound annual growth rate (CAGR) of 4.3% from 2022 to 2030. The growth is attributed to the rising requirement in the energy industry, which is expected to drive the global oil & gas market growth during the forecast period. Furthermore, an increase in demand for crude oil and gas by various industrial sectors, such as power plants and transportation, has been driving the demand for oil and gas production globally. Rising concern toward handling solid wastes, spill containment, and collapsing boreholes is expected to bring new opportunities for the drilling oil market over the forecast period. The industry is also expected to witness a huge leap in demand for the product due to its usability in the industries where oil & gas play an essential role. 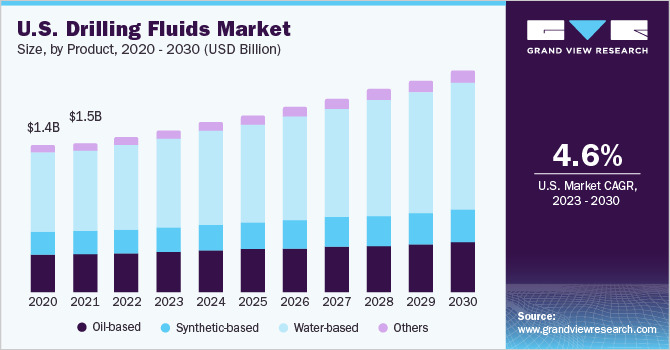 The growing offshore industry, mainly in the Persian Gulf, is expected to witness a huge growth in the drilling fluid market over the forecast period. However, the market growth is predicted to be hindered by the adverse environmental effect of drilling oil coupled with stringent government regulations. The demand for advanced drilling oil chemicals is anticipated to create immense opportunities due to their extensive utilization in horizontal drillings, like wells.

The crude oil price slump in 2014 & 2015 had a major impact on the oil & gas business, leading to the reductions in planned capital expenditure and the implementation of cost-cutting strategies. The oil & gas industry started implementing defensive strategies, which had a direct impact on the oil field service industry. The impact was very quick and deepening due to which many industries linked to oil & gas are facing a severe reduction in cash flow. The government has recently imposed strict restrictions on the use of drilling fluid due to its adverse effects on the environment.

Water-based dominated the global market with a revenue share of about 52.1% in 2021. They are used to drill over 75% of wells globally. The type of fluid selected in the operation depends on the well’s condition, which comprises formate brine or saturated brine and fresh water. Growing concern towards toxicity and biodegradation of other drilling fluids is expected to play a vital role in rising product demand over the projected period. Water-based oil is expected to gain significance in the coming years owing to its ease of use and discharge feature in offshore activities. The rising demand for an efficient fluid system in high-pressure and high-temperature wells is anticipated to trigger the demand for water-based oils.

Oil-based product is the second-largest revenue contributor to the product market globally. Oil-based drilling fluid is used in drilling engineering and is the composition of oil and water in continuous and dispersed phases, respectively. Oil-based is expected to gain significance in the future, owing to its improved lubricity. Due to the increasing demand for lesser corrosion of drilling tools, and higher thermal stability, it is expected to gain significantly during the forecast period. Though Oil-based fluid is anticipated to witness significant growth in coming years, its reaction affects the environment, resulting in stringent regulations imposed by the government on its use.

Synthetic-based fluid is anticipated to witness rising growth due to biodegradability characteristics. Its production consists of base oil, such as esters, poly alpha-olefins, and linear paraffin. Synthetic fluids are expected to gain importance during the forecast period due to their low toxicity, low fluid loss, and low bioaccumulation potential. Increasing concerns about downhole losses, and maintenance cost in deep waters projects has urged oil and gas companies to move towards, a better, less harmful to the environment, and more efficient fluid system.

Onshore application dominated the drilling fluid market with a share of 60.3% in 2021. Its high share is attributed to the increasing number of oil drilling activities to fulfill growing energy needs. Due to an increase in the number of research activities to develop abandoned oil wells and revived projects in various onshore oilfields, the worldwide volume of oil and gas production is expected to grow dramatically. Growing onshore oil & gas exploration in countries like Saudi Arabia, the U.S., China, and Russia is expected to increase awareness and demand during the forecast period. 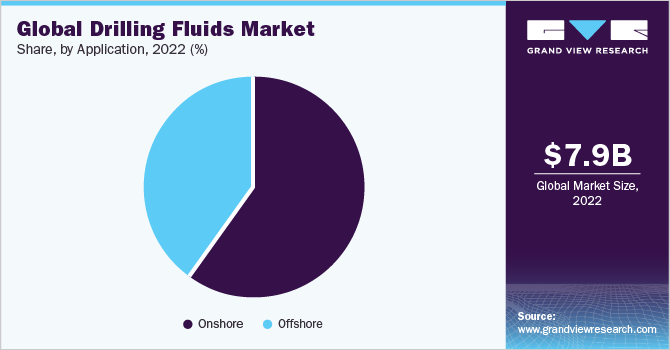 Growing global offshore rig count coupled with significant development of existing offshore wells both in deep and ultra-deep waters majorly, in the Gulf of Mexico, North Sea, Persian Gulf, and the South China Sea, is anticipated to drive demand in the forecast period. The increasing number of ongoing projects and implementations in the Middle East and Africa is expected to provide immense demand opportunities to the market.

North America dominated the market with a revenue share of 25.3% in 2021 and is expected to witness the same trend during the forecast period. Increasing oil and gas production with significant oil field development, particularly in the U.S., is anticipated to trigger the demand in the region. Also, massive oil reserves in Canada play a major role in driving the demand in the region. Canada is the fifth-largest producer of crude oil and natural gas. The significant development in Canada’s oil & gas field has been a key influencer in the industry growth in the region.

Europe is predicted to witness a huge industry expansion due to significant drilling fluid requirements in the horizontal wells, particularly in Italy, Norway, Denmark, the Netherlands, France, and the UK. Growing demand for crude oil has been influencing E&P businesses in Europe to get involved in extensive drilling activities in onshore and offshore locations.

Asia Pacific is expected to see huge growth due to the exploration of deep waters and tight oil reserves in the region. Various advanced technological implementation to reduce the production cost and enhance efficiency is playing an important role in the growth of the market in the region and is expected to expand further in the coming years.

The drilling fluid markets have become highly competitive due to the presence of multinationals and more than 100 companies working in the same industry. The big players are involved in product innovation involving R&D investment to develop multi-functional fluid additives, which offer a competitive edge over other players. Top market players handling diverse industry demand set them apart from other market players. Some prominent players in the global drilling fluids market include:

This report forecasts revenue growth at global, regional, and country levels and provides an analysis of the latest industry trends in each of the sub-segments from 2022 to 2030. For this study, Grand View Research has segmented the global drilling fluids market report based on product, application, and region:

How big is the drilling fluids market?

What is the drilling fluids market growth?

b. The global drilling fluids market is projected to register a CAGR of 4.3% from 2022 to 2030. Growing demand for crude oil and natural gas in various energy-intensive industries such as power generation, manufacturing, and transportation has urged exploration and production companies to increase their investments in onshore and offshore drilling activities.

Which segment accounted for the largest drilling fluids market share?

b. Water-based fluids emerged as the largest product segment with a share of more than 51.0% in 2021. These fluids are estimated to witness increased penetration and growth rate on account of cost-effectiveness and lower environmental impact of the discharged cuttings and mud.

Who are the key players in drilling fluids market?

What are the factors driving the drilling fluids market?

b. Increasing number of oil drilling activities in order to fulfill growing energy needs is anticipated to drive the product demand over the forecast period.