E-Prescribing Market Size, Share, & Trends Analysis Report By Product (Solutions), By Delivery Mode (Web/Cloud), By End Use, By Usage Method, By Substances, By Specialties, By Region, And Segment Forecasts, 2019 - 2026

The global e-prescribing market size was estimated at USD 1.05 billion in 2018 and is anticipated to grow at a double digit CAGR of 24.5% over the forecast period. Increasing pressure to minimize medical errors and Adverse Drug Events (ADEs) coupled with the need to keep a check on opioid prescriptions in countries such as the U.S. are expected to be the major factors driving market growth. 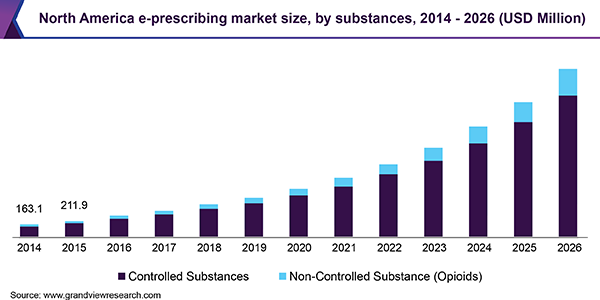 Among medication errors, prescription faults are the foremost causes of concern for healthcare professionals worldwide, as they account for over 70% of medication errors reported by hospitals & general practice settings. Although these errors are rarely fatal, they can have serious adverse effects on a patient’s health. In addition to the associated risk for a patient’s health, prescription errors are also a common cause of medical & legal malpractice claims against healthcare professionals & doctors.

According to the General Medical Council (GMC) report, 2018, in the U.K., these prescribing errors and faults are reported in about 9% to 15% of medication orders for hospital inpatients. By employing e-prescribing systems, these errors can be reduced in most of the scenarios by almost 85%. At the time of prescription, e-prescribing technology can further reduce the chances of errors through implementation of warnings and alert systems, while providing the patients & physicians with a complete background of the medical history.

Growing opioid crisis in the U.S. is a major concern driving growth of e-prescribing technology. Electronic Prescription in Controlled Substances (EPCS) provides a transparent, secure system that makes it comparatively easier to prescribe various controlled substances to the patients who legitimately need them, at the same time making it more difficult to commit abuse or fraud. For instance, according to Surescipt estimates in 2018, the opioid epidemic touched crisis proportions and costs the U.S. more than USD 500 billion every year.

Furthermore, government support is expected to aid market growth in the coming years. For instance; the SUPPORT for Patients and Communities Act, which the U.S. Congress passed in 2018, requires use of e-prescription for all the controlled substances, is to be under Medicare Part D by Jan 2021

Based on products the market has been segmented into solutions and services. Solutions held a major market share of the product segment in 2018, owing to growing penetration and high cost of the software. Service segment is expected to grow at a significant rate over the forecast period.

Untapped opportunities in developed and developing region are the major factor leading to growth of services segment. For instance, according to Center for Studying Health System Change (CSHSC), lack of electronic prescribing uptake in outpatient settings due to incomplete patient data, technological complexity, and physician attitude toward e-prescribing are the major factors that affect successful use and implementation of e-prescribing. According to Surescript Survey 2017, more than 70% of the U.S. hospitals prescribed electronically; however, almost 30% of the physicians still preferred paper-based prescribing.

Web/Cloud based e-prescription systems accounted for a major market share in 2018, owing to low cost as compared to the on-premise systems. A cloud platform is an attractive option for independent practitioners, small clinics, or physician offices as well as community hospitals, which are not able to pay the high initial costs of the on-premise systems. Cerner, Athenahealth, Allscripts, and eClinicalWorks are some of the health IT companies that offer cloud-based solutions to the users. Furthermore, ease of deploying a cloud solution and lesser training requirement are few other factors leading to growth of cloud solutions.

However, for large healthcare systems and organizations, which have the capacity to store large data, pay high upfront costs, and maintain servers, on-premise systems are a much reliable option. Increasing demand for data security & sharing and digitalization expenditure is expected to promote growth of on-premise solutions during the forecast period. Epic and Cerner Corporation are two of the major players in the on-premise e-prescribing market.

Hospitals held a major market share of the end-use segment, majorly due to the increasing adoption in these facilities. According to a survey conducted by the American Society of Health-System Pharmacists (ASHP) in 2016, technologies that improve medication use have been implemented in more than 95% of the hospitals in the U.S., with e-prescribing & transcribing in almost 392 hospitals based in the U.S. Furthermore, according to Surescript, more than 3,20,000 office-based physicians currently prescribe using e-prescribing in the country.

However, successful transition from handwritten prescription to e-prescription may take longer than expected, and the e-prescribing system features that currently do not support the workflow and require constant upgrades will further delay the process. In addition, as system features evolve continually, physicians and prescribers may need constant support & training to maintain efficiency, which is expected to further increase the overall cost of technology, restraining market growth.

Handheld devices dominated the market share owing to their ease of use. Furthermore, technological advances such as DrFirst’s Rcopia system, which has been modified in 2019, making it compatible with small screens of the mobile devices, including Apple iPhone, are expected to aid in growth of this segment.

Furthermore, handheld electronic devices, such as tablets, PDAs, and smartphones are generally preferred in exam rooms for e-prescribing due to easy access. However, strategically placed computers, outside or inside of the exam rooms, also support the process well, mitigating the need for handheld access. However, for accessing full EHR, computers with larger monitors are generally preferred, as they enable more data to be reviewed at the same time.

Oncology held a major market share of the specialties segment in 2018. Errors in prescribing chemotherapeutic or cancer medicines can result in serious errors. Most of these errors can be attributed to the illegible prescriptions, as well as to lack of adequate documentation. Increasing number of medical errors in chemotherapy have led to adoption of the technology in hospitals specifically for oncology. For instance; BMI Healthcare, a hospital network, in 2016, installed iQemo, a cancer e-prescribing system supplied by the Knowledge Medical Systems, at 30 of its hospitals that offer chemotherapy. 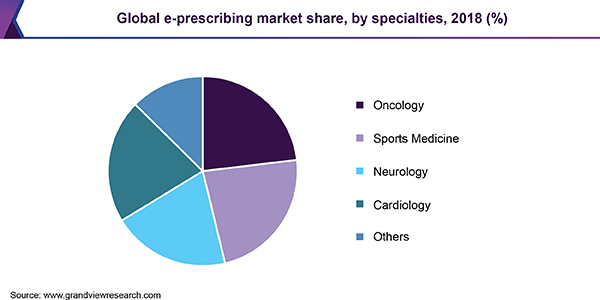 Furthermore, government initiatives to promote e-prescribing are further expected to boost market growth. For instance, in 2018, the Department of Health and Human Services Australia invited Expressions of Interest (EOI) from the Victorian public health services for co-investment to implement oncology e-prescribing systems across the country. On the other hand, cardiology segment is expected to grow at a higher rate, owing to high demand for EMRs and e-prescribing systems from specialty-specific tests for OHIP & RAMQ Billing and workflow challenges.

North America is anticipated to dominate the market over the forecast period, owing to high number of government initiatives and incentives in the region. Europe is the second largest market for e-prescription software, owing to the strict regulatory policies in European countries to prevent medical errors. Furthermore, initiatives by the EU are further anticipated to lead to growth. While many countries do not accept e-prescriptions from other countries, the EU issued a circular in 2019 allowing use of an e-prescription issued by a practitioner in a different country while visiting a pharmacy in another EU country.

Furthermore, favorable government initiatives at country level, such as incentive programs and stringent regulations over handwritten prescriptions due to possibility of medical errors, are the major reasons leading to the overall market growth. For instance, the UAE's Ministry of Health and Prevention banned handwritten medical prescriptions in 2018. According to this initiative circular, private medical facilities must provide printed or electronic versions of the prescriptions.

The market is highly competitive with few players holding majority of the share. With growing patient awareness and need for minimization of medication errors, along with continuous demand for cost reduction & better quality of healthcare solutions, the players are trying to develop innovative products in order to sustain competition.

Cerner and Epic hold a major market share of the software solutions in e-prescription due to their vast product portfolio. As the market is still in its development stage, the growth potential is high. Furthermore, companies are also focusing on emerging countries that are expected to become major markets for the players in the coming years. Some of the other major players are Health Fusion, Inc.; eClinicalWorks; Allscripts Healthcare Solutions, Inc.; and Aprima Medical Software.

This report forecasts revenue growth at global, regional, & country levels and provides an analysis of the latest industry trends in each of the sub-segments from 2014 to 2026. For the purpose of this study, Grand View Research has segmented the global e-prescribing market report on the basis of product, delivery mode, end use, usage methods, substances & specialties, and region:

How big is the e prescribing market?

What is the e prescribing market growth?

Which segment accounted for the largest e prescribing market share?

b. North America dominated the e prescribing market with a share of 39.32% in 2019. This is attributable to high number of government initiatives and incentives.

Who are the key players in e prescribing market?

What are the factors driving the e prescribing market?

b. Key factors that are driving the e prescribing market growth include increasing pressure to minimize medical errors and Adverse Drug Events (ADEs) coupled with the need to keep a check on opioid prescriptions.