The global electric DC motors market size was valued at USD 20,196.6 million in 2016. Their rising applications in electric motor vehicles are predicted to be the key factor driving market growth over the forecast period. DC motor is employed in various industrial machinery applications ranging from handheld tools to material transportation equipment.

Since its inception, DC motor has been used in a variety of equipment, such as household appliances including vacuum cleaners; industrial equipment including plastic extruders; forklifts; and so on. The market is anticipated to witness substantial growth, which is ascribed to the increased modernization and automation of manufacturing processes.

Factors such as collective efforts by governments all over the world to encourage manufacturing and rising adoption of electric vehicles are expected to create a huge demand for DC type in the future. The overconsumption of conventional energy sources, such as fuels, and their rapid depletion have led several nations to redesign their energy regulation policies. The usage of these motors not only provides cleaner consumption but is also effective in cutting down costs.

With the rising production demand, the rate at which production industries are implementing automation and modernization in their processes is alarmingly high. Furthermore, the modernization of traditional agricultural equipment, which extensively uses DC motor, is also high. These factors have resulted in increasing demand and are expected to drive the electric DC motors market over the forecast period.

Electric DC motor can be broadly segmented into two types, namely brushed and brushless. Brushed DC is the primitive type of electric DC motor. However, they are not obsolete as yet owing to factors such as the ability to vary the speed-torque ratio in any desired way. These motors find applications in household appliances and the automotive industry and are anticipated to witness growth at a CAGR of over 3% by 2025.

The brushless segment accounted for the majority market share in 2016 and is expected to grow at a CAGR exceeding 4% by 2025. They are witnessing a speedy adoption across several industries, which is ascribed to unique benefits such as enhanced safety offered over a conventional brushed motor.

The absence of brushes eliminates the risk of sparks caused by friction. As a result, they are extensively used in applications with space constraints.  Additionally, the latest designs of electric DC motor aim at overcoming cost issues while simultaneously providing enhanced performance capabilities over traditional ones, thereby driving their adoption.

The 0-750Wsegment currently finds a greater scope in commercial and industrial applications and is expected to grow at a high CAGR over the forecast period. Similarly, the above 75 kW segment is also projected to witness high growth over the forecast period owing to advantages such as enhanced performance, efficiency, and reliability offered over traditional ones.

Electric DC motor has been active in the market for a longer period of time. Its presence in the market prior to the industrial revolution has resulted in numerous applications in the majority of industrial machinery. The industrial machinery segment dominated the market with a value of over USD 4,000 million in 2016 and is expected to grow at a CAGR of over 5% from 2017 to 2025. The growth of building automation systems has propelled the adoption of DC type in this sector owing to their ability to facilitate smooth operations and offer precise motion control.

Additionally, the motor vehicle segment is also expected to witness robust growth over the forecast period. The increasing automobile production and rising preference for electric vehicles are the major factors driving the growth of the global market. 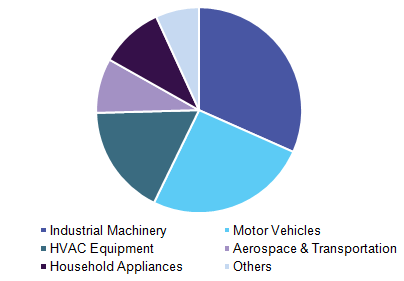 Their increasing use in automated doors, wipers, sunroof systems, massage seats, and adjustable mirrors of vehicles has led to their rising demand. Additionally, other segments, such as household appliances, aerospace and transportation, and HVAC equipment are expected to witness steady growth over the forecast period.

The Asia Pacific market is anticipated to witness high growth over the forecast period. The regional market comprises developing nations such as India, China, and Japan, whose rate of development is faster than most of the other developing nations in the world. The large-scale automation and modernization of production industries have driven the development rate of these nations, which is expected to ultimately drive the demand for DC motor in the region.

Developed regions, such as North America and Europe, are expected to witness steady growth over the forecast period. This region accounted for 15% of the total market share with a revenue of more than USD 3 million. Encouragement from the U.S. government for manufacturing electric vehicles is estimated to bring about a rise in the demand for these motors over the next few years. Additionally, government funding initiatives for electric vehicles to safeguard the environment from carbon emissions are driving the market in Europe.

The global market includes the presence of both large-scale and small-scale electric DC motor manufacturers. Major players include Ametek Inc., Franklin Electric Co., Asmo Co. Ltd., and others. Companies are extensively investing in the research and development of DC types in order to introduce products in a more compact size.

Major market players focus on the miniaturization and development of modular DC motor. Additionally, efforts are also being made for developing an electric DC motor with integrated speed controllers in order to efficiently serve customer requirements.

This report forecasts revenue growth at global, regional, and country levels and provides an analysis of the latest industry trends from 2014 to 2025 in each of the sub-segments. For the purpose of this study, Grand View Research has segmented the electric DC motors market based on type, voltage, end use, and regions: