The global electric ship market size was valued at USD 6.45 billion in 2019 and is expected to grow at a compound annual growth rate (CAGR) of 11.2% from 2020 to 2027. The market is in its introduction stage and has enormous scope for growth in the forecast period. Rising need for reduction of carbon footprints as well as lower fuel wastage has led to the need for an electric operated marine ship. Furthermore, increasing focus of shipbuilders on reducing the noise generated from the marine vessel propulsion systems is supporting the growth of the market. According to the Environmental Protection Agency (EPA), transportation was responsible for more than 29% of greenhouse emissions in the U.S. in the year 2017. The transportation sector is one of the prominent sources of increasing greenhouse emissions across the globe. These emissions from transportation primarily come from burning fossil fuel in aircraft, trains, ships, and vehicles. 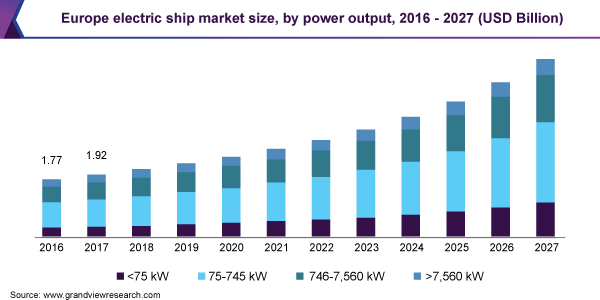 Approximately 90% of the fuel used for transportation is petroleum-based, which primarily includes diesel and gasoline. Besides, several initiatives taken by the government for the reduction of carbon emission, such as subsidies on the purchase of electric operated transportation ships, are expected to boost the growth of the market over the forecast period.

Furthermore, growing competition among various end users, such as trade, transportation, and logistics industry, has compelled the service providers to reduce their operational costs, such as fuel consumption and large crew,in order to increase their profit margin and reach the breakeven. This move by the logistics and transportation service providers to decrease operational cost is expected to support the growth of the market.

Earlier, in conventional propulsion engines, the prime movers of the ship were directly coupled with the shaft, which creates vibration and friction, thereby reducing the efficiency of the electric ship. However, in the electric propulsion engine, the prime movers are not directly connected, which reduces the vibration and increases the effectiveness of the system. Additionally, the space required for the installation of electric propulsion machinery is much lesser and compact as compared to conventional propulsion systems. The space that is occupied by these machines can be used for some other purposes to earn more income.

The hybrid segment dominated the market for electric ship with a share of 81.3% in the year 2019 and is expected to maintain its lead throughout the forecast period. Various advantages such as reliability offered by hybrid electric ships are supporting its demand owing to the use of supplementary propulsion systems and higher speed, which can reduce the risk of failure and can cover greater distances in lesser time. Besides, hybrid electric vessel propulsion can be propelled in two ways, namely electrical (via diesel-electric or battery power-driven) or mechanical (direct diesel drove).

Furthermore, shipowners or shipping and logistic companies across the globe are preferring hybrid electric ships as they enable lower fuel consumption and help to reduce the operational cost. The use of diesel-electric propulsion at low power and direct diesel-driven propulsion in need of high power, i.e. inland water sailing with different speed conditions, enables reduction in operational cost in the electric ship. This is a smarter way to use available energy and save on fuel costs by using hybrid electric ship propulsion. A fully electric ship is expected to witness steady growth over the forecast period owing to its growing preference in inland and nearby transportation.

Commercial electric vessels accounted for the largest market share of 77.1%in 2019. With rising manufacturing and globalization of trade, there has been a rise in the number of marine vessels added to the existing fleet. Additionally, an increase in maritime logistics drives the need for more sailors, which adds up to the operational costs of the logistics service providers. Rising competitiveness among logistics service providers and adoption of competitive pricing strategy is expected to fuel the adoption of automated systems in commercial ships. The electric propelled automated ship reduces the operating cost and provides more space for the cargo, which is expected to spur the segment growth in the upcoming years. 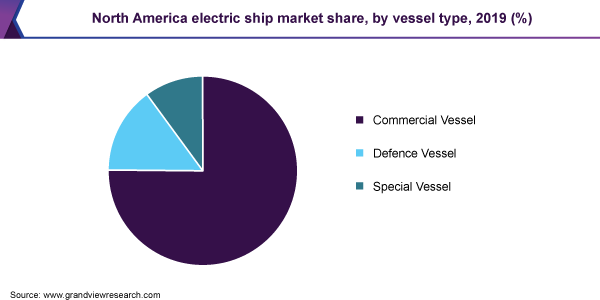 The 75-745 KW power output segment dominated the market for an electric ship held a share of 44.0% in 2019. During the last decade, 75-745 KW power output ships were the most preferred in the shipping industry. Increasing awareness pertaining to environmental conservation resulting in the development of propulsion systems, which emits minimal emissions, has generated particular importance in the medium-sized marine vessel, thereby boosting the growth of the 75-745 KW power output segment. Advantages such as less vibration and lower engine noise have also boosted the growth of electric vessels in medium-size passenger and luxury ships. Additionally, the electric propulsion system encapsulates less space, thus providing more space for interior and increasing its preferability in luxury ships.

The less than 75 KW power output segment is expected to expand at the fastest CAGR of 12.3% over the forecast period. The growth can be attributed to the upgrades in existing passenger transport and inland transportation ships. Additionally, factors such as low fuel consumption and lower maintenance cost as compared to diesel propulsion are attracting more end users to invest in this technology. Moreover, the market for recreational boats is large, and fast-growing and high adoption of electric ships in maritime tourism is expected to fuel the segment growth over the forecast period.

Based on the level of autonomy, the market for electric ship has been segmented into semi-autonomous and fully autonomous. Semi-autonomous vessels held the largest share of 99.8% in 2019. Since fully autonomous marine vessels are anticipated to be commercialized by 2020, the market sales have been majorly driven by semi-autonomous ships. These naval ships have pre-installed systems and components, such as sensors, cameras, and navigation systems. Additionally, these systems can be installed in existing vessels that earlier have manual operation.

The fully autonomous segment is anticipated to witness the fastest growth from 2020 to 2027 due to several advantages that these vessels offer as compared to the semi-autonomous marine ships. These benefits include efficient utilization of ship space, reduction in human errors, and risk mitigation of the transport. Navigation systems and other advanced maneuvering systems that use sensors and GPS will enable efficient maritime transportation without human involvement. Furthermore, faster operations with the reduced operational cost of fully autonomous electric ships are expected to propel the segment growth over the forecast period.

Europe accounted for the largest share of 34.9% in 2019 and is anticipated to witness considerable growth over the forecast period. Germany emerged as a significant contributor to the market growth in Europe owing to rising environmental awareness of the general population, along with government initiatives to promote electrically operated transportation modes. Moreover, the growing popularity of electric recreational and leisure vessels in marine tourism, water adventures, and fishing activities in the region is expected to propel the regional market growth. However, the COVID-19 pandemic, which recently spread across European countries, especially Italy, U.K., Spain, and Germany, is expected to negatively impact the regional market growth.

Asia Pacific is anticipated to emerge as the second fastest-growing regional market over the forecast period. Strong economic growth, along with high manufacturing rates, is expected to help the region in maintaining its position as a manufacturing hub across the globe. However, in recent months, there has been a significant economic impact of COVID-19 coronavirus on financial markets and vulnerable industries, such as manufacturing, tourism, hospitality, and travel, in Asia Pacific countries, such as China, Japan, and India. These countries are the major contributors to the market growth in Asia Pacific. However, slow growth of these countries due to pandemic is expected to impact the regional market growth. However, considering the fact that China is coming close to its recovery phase, it is anticipated the impact of this pandemic on the growth of China's market would be at a lesser rate over the forecast period.

Key market players are entering into collaborations and engaging in mergers & acquisitions of other electric ship companies to capture a greater market share. Furthermore, the market participants are focusing on improving the automation technology to attain a competitive edge over other players. System manufacturers such as ABB and Siemens are also considered in the value chain of electric marine ships. Some of the prominent players in the global electric ship market  include:

This report forecasts revenue growth at the global, regional, and country levels and provides an analysis of the latest industry trends and opportunities for each of the sub-segments from 2016 to 2027. For the purpose of this study, Grand View Research has segmented the global electric ship market report on the basis of power source, power output, autonomy level, vessel type, and region:

How big is the electric ship market?

What is electric ship market growth?

Which segment accounted for the largest electric ship market share?

b. Europe dominated the electric ship market with a share of 34.9% in 2019. This is attributable to the rising environmental awareness among population in the region coupled with government initiatives to promote electrically operated transportation modes.

Who are the key players in electric ship market?

What are the factors driving the electric ship market?

b. Key factors that are driving the market growth include imminent need to reduce carbon footprints, lower fuel wastage, and limit noise generated from the marine vessel propulsion systems.