The global electroactive polymers market size was valued at USD 2.9 billion in 2014 and is expected to witness significant growth over the forecast period. Rising importance of piezoelectric and ferromagnetic materials in electronic applications, coupled with increasing expenditure on the development of new conductive technologies, is expected to drive the market.

Electroactive polymers are incorporated in sensors and actuators on account of their conductive and piezoelectric properties. Increasing production of electronics in China, Japan, South Korea, and Taiwan on account of favorable regulatory support, coupled with increasing use of nanotechnology, is expected to remain a driving factor in the industry. 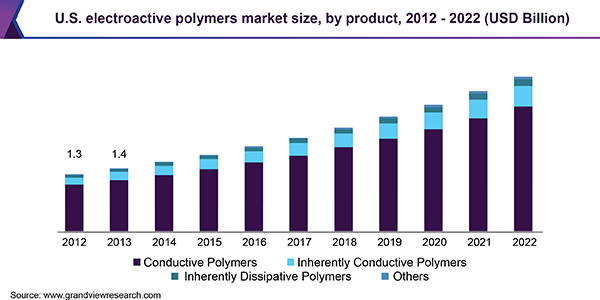 Rising importance of biomimetic and artificial muscles for solving complex health problems is likely to increase the usage of electroactive polymers. In March 2012, researchers at the North Carolina University developed a lightweight and affordable Braille computer display from electroactive actuators to help blind people in scanning web pages.

In January 2014, the government of South Korea announced its plans to develop the healthcare industry by increasing R&D expenditure on the introduction of new medical devices, which, in turn, has supported industry growth. Moreover, rising applications in sensor manufacturing, along with growth of the electrical and electronics sector, are likely to support the electroactive polymers market growth.

Increasing usage of electroactive polymers for corrosion-inhibiting coatings on ferrous and non-ferrous alloys, metamorphic biomaterials, actuators, and protective fabrics is anticipated to propel the product demand over the forecast period. Moreover, rising demand for the product in antistatic packaging applications across the industries is likely to support product growth.

Electroactive polymers are used in energy storage devices on account of their advantages including high capacity, flexibility, and design versatility. These products can also be used to replace heavy parts of aircraft, such as wings and outer panels. Underwater robotic applications with fast actuator response and corrosion resistance can be operated with electroactive polymers.

Conductive polymers dominated the global industry in 2014 and held over 80% share of the overall volume. They include electrostatic dissipation (ESD)/electromagnetic interference (EMI) compounds, antistatic additives, carbon nanotubes, and metal fibers. These products are used as antistatic materials and they find their application in commercial displays, transparent displays, actuators, biosensors, and organic solar cells.

Demand for inherently dissipative polymers (IDP) was 10.9 kilotons in 2014 and the segment is projected to grow significantly in the projected period. It is majorly used as an antistatic additive for the packaging of sensitive electronics and plastic parts owing to its ability to prevent dust attraction and electrostatic discharge. In addition, introduction of the latest technology gadgets with a large number of sensors is likely to support segment growth.

Other product types including ferroelectric, piezoelectric, and dielectric elastomers are anticipated to witness high demand in the projected period owing to rising applications. Increasing use of piezoelectric materials for obtaining SONAR signals in submarines, sound system speakers, and the robotics industry is likely to have a positive impact on industry growth.

ESD and EMI protection dominated the global electroactive polymers market in 2014 and generated a revenue of over USD 950.0 million. Polyaniline and carbon black filled polymers are majorly used for ESD protection in electronic devices, thus supporting the segment growth. 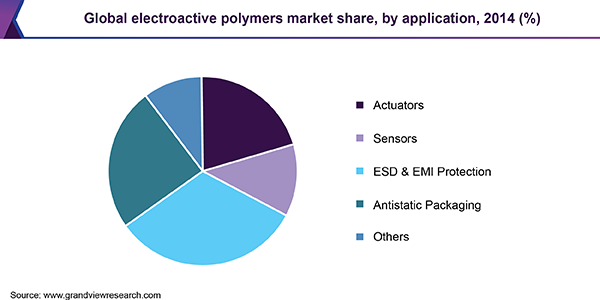 Other applications include coatings, inks, batteries, capacitors, solar cells, and photovoltaic modules. Shifting consumer preference for renewable energy generation on account of increasing awareness regarding environmental protection is expected to increase the application of solar cells and photovoltaic modules, and thus having a favorable impact on the market growth.

North America accounted for 62.2% share of the overall volume in 2014 and is expected to continue its lead in the forecast period. Rising expenditure on the development of advanced implant devices and minimally invasive surgeries in U.S. is expected to propel demand. Moreover, increasing investment in R&D is supporting market growth.

The electroactive polymers market demand in Europe exceeded 45.0 kilotons in 2014. Well-established automobile manufacturing base in Germany, France, and Italy is expected to propel product demand in fuel engines and other parts of vehicles. In addition, the growth of the aerospace manufacturing sector in the region is anticipated to fuel the product demand.

Growth of the application industries in Asia Pacific and Europe, along with favorable government regulations, has contributed to the rising demand for the electroactive polymer products. In addition, growth of the machinery manufacturing segment in these regions is likely to support the market growth over the projected period.

Asia Pacific is expected to register the fastest CAGR of 11.3% in terms of volume over the forecast period owing to growth of the electronics and automotive manufacturing sectors. Regulatory support for increased investments in India and China to enhance manufacturing output is expected to augment the electronics sector at the domestic level, and thus having a positive impact on the growth.