The EMEA Prestressed Concrete wire and strand market size was valued at USD 396.2 Million in 2017 and is expected to witness a CAGR of 2.6% from 2017 to 2025. Rising offsite construction activities is expected to fuel market growth over the next few years. Offsite construction helps save time and reduce material wastage. The process can be carried out irrespective of the weather conditions. For example, prefabricated construction is used in the construction of bridges and flyovers, where segmental girders are prefabricated along with the installation of PC strands.

These segmental girders are transported to the site and erected with the help of cranes and skilled labor. Thus, the growth in prefab or offsite construction is anticipated to be a key driver for the PC wire and strand market over the forecast period. Uncoated PC strands are estimated to emerge as the largest segment owing to its distinctive quality to provide high tensile strength coupled with an elevated performance at excess temperatures. The use of uncoated PC strands is largely concentrated for the inner application in precast structures. The exposure of these strands to air is kept minimum to avoid corrosion or rusting. 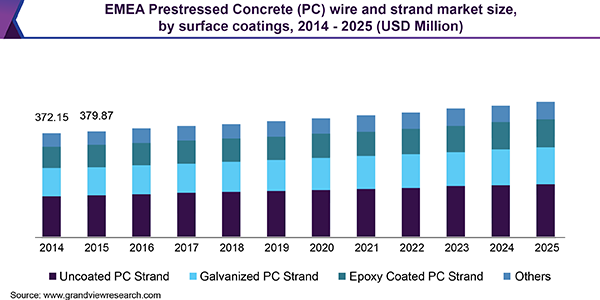 The stable construction sector of the Middle East region, especially in UAE and Saudi Arabia, is expected to drive the product demand over the coming years. A swift growth is likely to be observed in the galvanized product segment in the near future. Increasing demand for the galvanized product is likely to be catered by the rising number of high-rise building construction, especially in the Middle East region. Global steel production witnessed a slowdown in 2016 and 2017 due to fewer investments in the steel industry.

Moreover, the slow growth of the construction industry in China is contributing to the slowdown owing to weak global trade. China has a large number of mills, which account for approximately half of the global steel production. The decline in the demand for steel in China was approximately -3.8% and -2.9% in 2016 and 2017, respectively. As steel is a vital raw material used in the manufacturing of PC strands and wires, vendors in China have slashed steel prices to eliminate unused steel inventories and increase exports, thereby resulting in a decrease in PC strand prices.

The uncoated segment accounted for the largest revenue share in 2017 and will expand further during the estimated period. The segment is likely to be driven by the increasing demand for uncoated PC strands from the construction sector. Product usage is largely concentrated on the inner application of precast structures. The stable construction industry in the Middle East region will also augment the product demand.

For instance, in 2017, the Dubai Municipality stated that nearly 28,600 buildings are under construction in Dubai. The project is already in the full swing as of 2018 and is likely to be completed by 2020. Galvanized surface coating is predicted to be the fastest-growing segment over the forecast period. The application of galvanized products is primarily concentrated in transportation construction.

Transportation construction includes public and private investments in the construction of highways, bridges, public transit, ports, and airport runways. Thus, growing investments in the transportation sector are directly linked to the rise in demand for these products. The product demand is likely to be fueled by the gulf countries, which are focusing on the development of high-speed transportation projects. For instance, in 2017, Oman Ministry of Transport and Communications awarded USD 320.0 million contracts for the construction of Batinah Expressway project.

On the basis of carbon content, the industry is segmented into high and medium content prestressed wire and strand. The high carbon content segment accounted for the majority of the market revenue share in 2017. High carbon content products are widely used in the construction of structural components for residential, as well as commercial, buildings. A growing number of hotels, malls, and hospitals coupled with rapid industrialization in these regions is the key factor responsible for the segment growth. The medium carbon content segment is likely to be driven by the growing demand from architectural building components.

The buildings application segment accounted for the largest revenue share of 55.3% in 2017 and is projected to witness a CAGR of 2.6% over the forecast period. A growing number of megacities is the key factor responsible for segment expansion. A city with a population of more than 10 Million inhabitants is termed as a megacity. The World Cities Prospect shared by the United Nation in 2016 shows that the number of megacities is projected to increase by 10 from 2016 to 2030.

The rise in infrastructural activities is also likely to support segment growth in the coming years. Moreover, increasing the adoption of precast structure for the construction of bridges is expected to drive the segment further. The bridges segment is anticipated to witness a steady growth rate over the forecast period. PC strands are used in the construction of various components of a bridge, such as a pier, segmental blocks, and foundation, to provide stability to the bridge structure with high tensile strength. 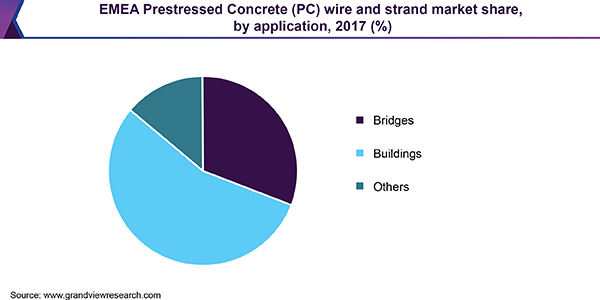 Western Europe has been impacted largely by the ‘Brexit’ crisis in 2016, with repercussions on the region’s trade, financial status, and economies. GDP growth rates have remained low in major countries, such as France and Italy. However, Spain has emerged as a strong performer with an upswing in its economy, owing to the benefits of structural reforms and other internal adjustments among regional workers. Germany has also remained a steady performer, consuming a large extent of structural steel for multiple construction projects.

This report forecasts revenue and volume growth at regional and country levels and provides an analysis of the latest industry trends in each of the sub-segments from 2014 to 2025. For the purpose of this study, Grand View Research has segmented the EMEA Prestressed Concrete (PC) wire and strand market report on the basis of surface coatings, carbon content, application, and region: