The global endocrine testing market size was valued at USD 8.8 billion in 2019 and is expected to witness a compound annual growth rate (CAGR) of 8.0% over the forecast period. Growing incidences of endocrine disorders such as hyperthyroidism and adrenal insufficiency are predicted to boost the demand for endocrine testing.

The growing diabetic, geriatric, and obese population worldwide is expected to promote market growth. Furthermore, growing healthcare awareness among individuals coupled with increasing government support is expected to increase the diagnosis at an early, thereby contributing to the growth of the endocrine testing market. 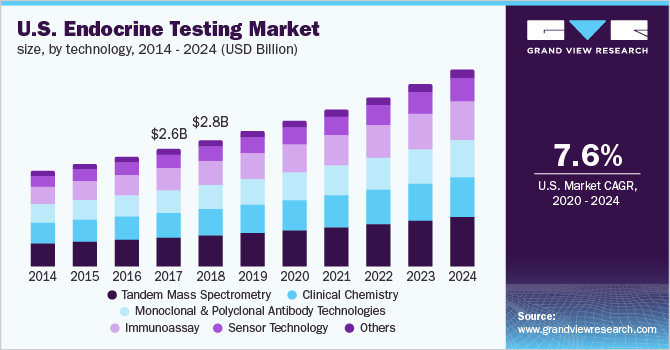 Advancement in technologies such as introduction of easy-to-operate test kits facilitated the penetration of home-based diagnosis, which is user-friendly and cost-effective. Moreover, the target of this market is the geriatric population owing to its increased susceptibility to chronic diseases and the high risk of developing complications at an older age, which makes continuous monitoring essential in these elderly patients.

Owing to increasing health awareness around the world, there has been advancement in home health care along with easy operating home diagnostic kits which are cost-effective and designed with precision. Many new mass spectrometric technologies have been introduced which deliver accurate results in less time and they are highly sensitive.

Mass Spectrometry is now coupled with liquid chromatography for more precision. Telehealth services have also been introduced by some commercial laboratories and stand-alone clinics. Fully automated systems have been designed for faster diagnosis and increased sample size testing.

The rising number of healthcare settings, especially in developing regions is fostering the growth of the endocrine testing market. For instance, in 2014, Saudi Arabia's government allocated USD 28 billion in health and development sectors. With the help of this grant, 17 new hospitals, and the expansion of 137 hospitals and primary health centers are anticipated. Similarly, in Qatar, the number of hospital beds is expected to rise from 4,980 in 2013 to 5,725 in 2018. These expansions are expected to create avenues for the therapeutic market.

Rising prevalence of both type I and type II diabetes worldwide is anticipated to boost market growth. Smoking, antimicrobial resistance, adoption of unhealthy & sedentary lifestyles, and alcohol consumption are some of the key factors contributing to the upsurge in the prevalence of diabetes. According to the National Diabetes Federation in December 2021, around 573 million adults were suffering from diabetes, and it is projected to go up to 643 million and 783 million by 2030 and 2045 respectively. Such rapid growth in prevalence is likely to have a high impact on the market growth over the forecast period.

According to a report from WHO published in March 2022, Obesity affects more than one billion people worldwide, including 39 million children, 340 million adolescents, and 650 million adults. Obesity leads to many chronic disorders such as diabetes, cardiovascular disorders, deep vein thrombosis, cancer, HIV, pulmonary embolism, and renal diseases. Thus, owing to growing prevalence of chronic conditions, the market for endocrine testing is anticipated to boost during the projected timeframe.

Technological advancements in endocrine testing have been leading to highly accurate results. Currently, there is a high demand for accurate and speedy diagnostic techniques. There have been advancements in endocrine test kits, which are easy to operate, cost-effective, and designed with precision.  For instance, to achieve greater precision, mass spectrometry is now combined with liquid chromatography. This technology is currently being used to overcome drawbacks of traditional methods and to deliver more accurate and consistent results. These advancements in technology are anticipated to propel market growth over the forecast period.

Buyers in this market include hospitals, physicians, and patients in case of home healthcare. Hospitals follow central purchasing policies that demand price discounts. To overcome competition, companies are trying to offer maximum discount as well as schemes such as free maintenance. This might minimize profit margins of manufacturers, thus restraining the market growth. The following commercialization of the tests, as well as high expenditures on research and development for biological systems stimulated by hormones, make endocrine testing manufacturers work hard. As a result, the expense of diagnosing and monitoring hormone secretion levels in the body is very high. The explanation behind the successful introduction and growth of effective endocrine testing systems and methodologies is improved access to advanced technology platforms. As a result, patients with restricted access to advanced endocrine diagnostic techniques are deprived of quality diagnostic measures, resulting in poor patient outcomes. As a result, the market for endocrine testing may be hampered by the high cost of testing technology.

Thyroid-stimulating hormone (TSH) test accounted for a lucrative share in 2016, This can be attributed to the increasing incidences of TSH-related disorders and the growing awareness regarding the correlation between variations in the thyroid hormones levels and cardiovascular disorders.

Sensor Technology is expected to show the fastest growth among all the segments owing to growing use of biosensors in glucose monitoring for diabetes which is used on routine basis by the individuals to monitor their blood sugar level in undiluted blood samples.

The market based on end-use is segmented into hospitals, commercial laboratories, ambulatory care centers, and other healthcare settings. The hospital segment accounted for the largest share in 2016 and is expected to dominate the market during the forecast period.

The commercial laboratory segment is expected to witness the fastest growth owing to availability of advanced infrastructure coupled with skilled personnel.

North America dominated the endocrine testing market and accounted for the largest revenue share of 41.45 % in 2021.  Canada and the U.S. are among the most developed nations in the world. High economic growth and presence of advanced research centers, hospitals, medical device manufacturers, and universities are some of the key factors boosting the development and commercialization of new products in this region. Major factors contributing to the growth of this region include government support for the availability of reimbursement, quality healthcare, high purchasing power parity, and increasing prevalence of diabetes & obesity in the U.S. and Canada. For instance, in June 2021, U.S. Supreme Court decided to uphold the Affordable Care Act (ACA), which promotes the quality and affordability of health insurance and reduces the cost of healthcare for individuals and government, from now on it will preserve access to care for people with hormone conditions like osteoporosis, diabetes, prostate and breast cancer, thus boosting endocrine testing market. 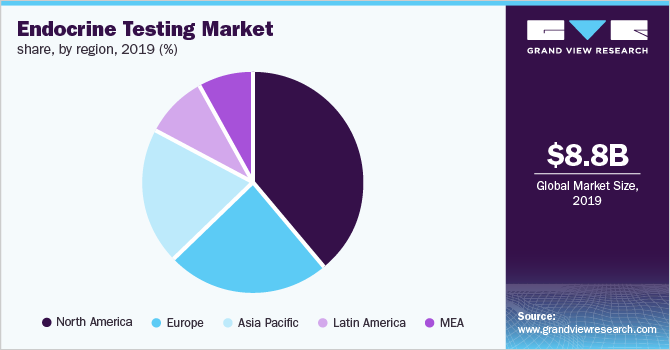 The U.S. dominated the overall North American endocrine testing market. Growing geriatric population and increasing prevalence of hypertension, heart disease, and diabetes mellitus in this country are some of the key factors expected to drive the market over the forecast period. For instance, according to data published on January 2022, by American Journal Society, it is anticipated that 609,360 new cancer deaths and 1,918,030 new cancer cases are expected in 2022. Furthermore, factors contributing to an increase in usage of endocrine testing include growing innovation in healthcare technologies, reducing healthcare expenditure, and higher. These advancements, increasing prevalence of chronic disease, is anticipated to grow market over the forecast period.

Canada is one of the most developed and advanced economies in the world and the expenditure on medical and healthcare infrastructure by the government is higher than most of the developed countries. hospital care services and growing prevalence of chronic diseases such as cancer, HIV, and various other diseases, and increasing aging population are expected to drive the growth of endocrine testing market. In addition, increasing innovation in healthcare and increasing life expectancy are some of the factors expected to lead to an increase in investment by Canadian government agencies in endocrine testing. Canadian endocrine testing market is anticipated to witness significant growth over the forecast period. For instance, according to Canadian Medical Association Journal, in May 2022, it is estimated that, 233,900 new cancer cases and 85,100 deaths by cancer are expected. Such increasing prevalence of chronic diseases is expected to drive the market growth for this region. 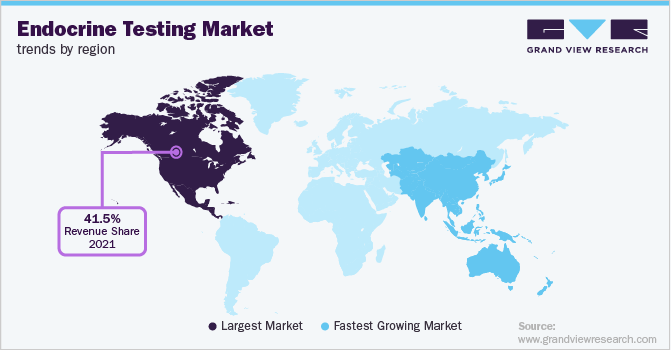 The players are actively involved in launching technologically advanced products and initiate collaborative developments to sustain themselves in the competition. For instance, LabCorp offers all-embracing solutions on clinical trials pertaining to diabetes and all other hormonal diseases. In addition, the company also provides liquid chromatography in combination with mass spectrometry to yield specific results even with minimal amounts of the hormonal sample.

This report forecasts revenue growth at global, regional, & country levels as well as provides an analysis on the latest trends and opportunities in each of the sub-segments from 2013 to 2024. For the purpose of this study, Grand View Research has segmented the global endocrine testing market report on the basis of test type, technology, end use, and region:

How big is the endocrine testing market?

b. The global endocrine testing market size was estimated at USD 8.8 billion in 2019 and is expected to reach USD 9.5 billion in 2020.

What is the endocrine testing market growth?

Which segment accounted for the largest endocrine testing market share?

b. North America dominated the endocrine testing market with a share of 39.3% in 2019. This is attributable to the presence of well-established healthcare infrastructure and favorable healthcare reimbursement scenarios in the North American region.

Who are the key players in endocrine testing market?

What are the factors driving the endocrine testing market?

b. Key factors that are driving the endocrine testing market growth include growing incidences of endocrine disorders such as hyperthyroidism and adrenal insufficiency.