The global immunoassay market size was estimated at USD 18.02 billion in 2018 and is expected to exhibit a CAGR of 5.0% during the forecast period. Increase in incidence of chronic and infectious diseases is expected to accelerate the demand. For instance, according to the World Health Organization (WHO), in 2017, about 65 million individuals in U.S. were suffering from Chronic Obstructive Pulmonary Disease (COPD). This factor is anticipated to bode well for regional demand in the forthcoming years.

Furthermore, rise in geriatric population is anticipated to act as a key factor driving the market growth. Lowering immunity with old age makes individuals prone to various infections and chronic diseases. Hence, elderly population is susceptible to diseases such as arthritis, hypertension, diabetes, and dementia among others. 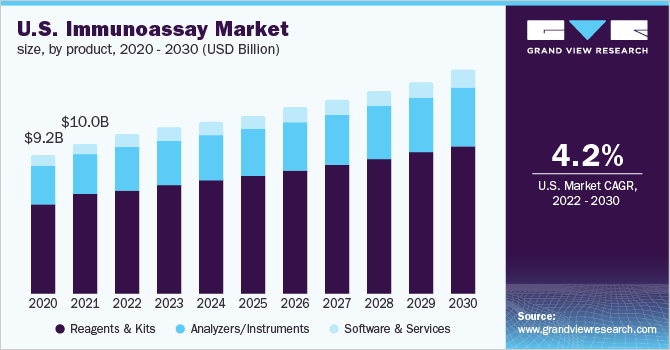 For instance, according to the United Nations, in 2017, the global geriatric population was 962 million and is expected to reach 2.1 billion by 2050, thereby driving the growth potential of the market for immunoassay.

The rise in incidence of infectious disorders like dengue, hepatitis, AIDS, and neurological disorders is one of the key factors projected to create growth opportunities for the market over the forecast period. For instance, as of 2017 according to the WHO, around 5.8 million cases of severe dengue were reported in the Americas.

Increase in prevalence of such diseases is anticipated to create lucrative opportunities for the key market players, enabling the launch of novel immunoassay products, which would further help in timely identification of various diseases.

Reagents and kits accounted for the largest share of the immunoassay market in 2018, owing to the extensive usage of the products for the detection of ailment-causing pathogens in HIV, dengue, and cancer as well as other chronic ailments. Reagents used in immunoassays include ELISA protein standards, assay diluents and blocking buffers, coating buffers, washing buffers, substrates, and conjugates and diluents, among others.

Moreover, software and services are expected to expand at a healthy CAGR over the forecast period, due to increased penetration of healthcare IT and growing need to manage and enable instant access to all related data. In addition, the utilization of software-enabled immunoassay devices makes it easier to perform tests by minimizing time to result generation and providing precise results.

Enzyme-Linked Immunosorbent Assays (ELISA) held a significant market share in 2018. ELISA technology has gained popularity over the years, as it helps detect food allergies, West Nile virus infection and various diseases, such as AIDS, influenza, Lyme ailments, and Ebola among others. ELISA also plays a vital role in development of vaccines, as the sera sample from immunized animal or human model can be tested through it to detect the presence of antibodies against specific type of antigens.

Rapid tests segment is expected to witness the second fastest CAGR over the forecast period, owing to their application in a wide range of ailments, such as dengue and infections caused by Legionella, Salmonella, and Campylobacter bacteria. In addition, advanced lateral flow assay is now available due to technological advancements in the healthcare industry. Applications of lateral assay were limited to a few diseases, however, now its applications range from normal qualitative tests to complex multianalyte quantitative assays. Therefore, increase in applications of rapid tests is expected to create lucrative opportunities for the players operating in this segment.

Infectious disease testing led the market in 2018. This can be attributed to the rise in prevalence of infectious diseases, such as tuberculosis, Lyme disease, salmonella infections, and meningococcal ailments cases. For instance, according to the Centers for Disease Control and Prevention (CDC) over 10 million cases of tuberculosis were registered globally and about 1.3 million deaths were caused by the same in 2017. Therefore, utilization of immunoassays would help detect these diseases, which is anticipated to increase market demand.

Oncology is expected to be the fastest growing segment during the forecast period, owing to the rise in number of cancer cases and technological advancements that aid precise identification of ailment-causing organisms. For instance, tumor biomarkers and assays are increasingly being adopted to curb or minimize the prevalence of cancer globally. Tumor biomarkers play a significant role in cancer care, from identification, screening, detecting, to monitoring its progression.

Endocrinology also holds a significant market share, owing to the growing incidence of endocrinal disorders, resulting in increased hospital admissions. For instance, according to the Johns Hopkins Health System Corporation in 2017, around 210,000 individuals in U.S. are admitted every year due to acute pancreatitis. Moreover, osteoporosis also affects around 40 million individuals in the country.

Hospitals accounted for the largest market share of about 32.0% in 2018, as they offer advanced facilities that include in-house diagnostic laboratories. With increase in prevalence of chronic diseases, such as cancer, infectious diseases, and autoimmune diseases, the need for hospitals and diagnostic centers for detection of antigens in cancer cells has increased. This factor is projected to bode well for segment growth in near future. 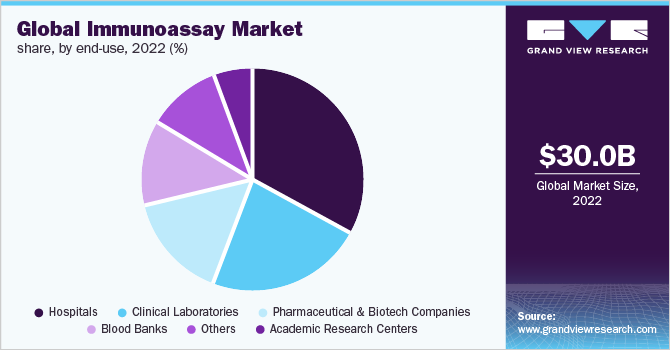 Clinical laboratories are also increasingly adopting immunoassays, such as immunohistochemical staining. This technique is largely used to identify abnormal cells found in cancerous growth. This has further increased the need for diagnostic centers and clinical laboratories that have advanced instruments to perform such tests, thereby supplementing market growth.

North America accounted for a market share of over 45.0% in 2018, attributed to the well-developed healthcare infrastructure and increasing penetration of medical devices in the region. Moreover, high expenditure on R&D by government organizations and pharmaceutical companies for disorders and diseases, such as chronic ailments and diabetes, are some prime factors driving the regional market.

Asia Pacific is predicted to witness lucrative growth in the forthcoming years due to rise in disposable income and healthcare spending in the emerging economies, such as India, South Korea, and China. In addition, increased adoption of medical devices in countries such as South Korea will also aid in creating lucrative opportunities. For instance, an agreement that rendered medical devices duty free was implemented on March 15, 2012 in Korea.

The industry is marked by the presence of various small and large companies. It is competitive in nature and is dominated by players, such as Siemens Healthineers; Becton, Dickinson & Company; BioMérieux; Abbott laboratories; Roche Diagnostics; Danaher Corporation; Ortho Clinical Diagnostics; Sysmex Corporation; Thermo Fisher Scientific, Inc.; and Quidel Corporation.

Companies focus on implementing strategies such as regional expansion, partnerships, and novel product launches to increase their revenue share. For instance, in December 2018, Quidel received a CE mark approval for its product Quidel’s Sofia 2 Lyme+ FIA that is to be used with Sofia 2 Fluorescent Immunoassay Analyzer. In addition, in June 2017, Becton, Dickinson & Company and FlowJo entered into a marketing collaboration in which both the companies agreed to offer cloud-based platform for immunoassay applications. Furthermore, this collaboration also enabled simultaneous measurement of 50 different characteristics of a single cell.

This report forecasts revenue growth at global, regional, and country levels and provides an analysis of the latest industry trends in each of the sub-segments from 2018 to 2025. For the purpose of this study, Grand View Research has segmented the global immunoassay market report on the basis of product, technology, application, end use, and region:

How big is the immunoassay market?

What is the immunoassay market growth?

Which segment accounted for the largest immunoassay market share?

Who are the key players in immunoassay market?

What are the factors driving the immunoassay market?