The global endoluminal suturing devices market size was valued at USD 41.9 million in 2019 and is expected to grow at a compound annual growth rate (CAGR) of 12.0% from 2020 to 2027. The high growth rate of the market is primarily attributed to the factors such as increasing incidence of obesity and the rising preference of minimally invasive weight loss surgeries. Obesity is a major health hazard and is the second most preventable cause of death in U.S. According to the Centers for Disease Control and Prevention (CDC), the prevalence of obesity in the U.S. was 42.4%, while the prevalence of severe obesity in adults accounted to 9.2% in 2018. Endoluminal surgery is a minimally invasive procedure performed in a hollow organ using surgical techniques such as suturing and stapling. Increasing preference for these surgeries is primarily due to rising awareness about minimally invasive procedures and reduction in post-operative complications. 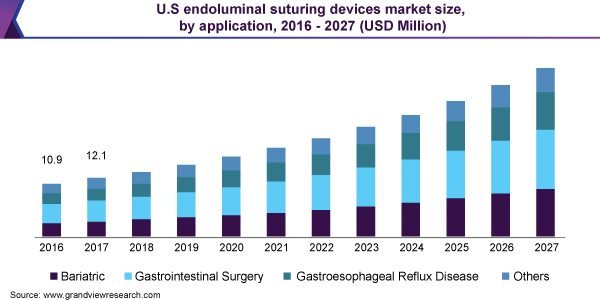 The hospitals segment held largest market share of 69.9% in 2019 and is anticipated to continue its dominance over the forecast period. This is due to the increasing incidence of chronic disease and rising number of bariatric surgeries. Moreover, improving healthcare infrastructure and increasing patient pool is also fueling the growth of the market for endoluminal suturing devices. In addition, presence of skilled healthcare professionals in developed countries such as U.S. and rising private and government healthcare funding are driving the endoluminal suturing devices market.

The ambulatory surgical centers segment is growing at the fastest pace owing to increasing number of minimally invasive surgeries limiting hospital stay. Technological advances in the field of endoluminal surgeries are also permitting more outpatient surgeries. Furthermore, cost of surgeries in these centers is much lower as compared to the hospital charges, thus providing significant savings to patients and insurers.

The gastrointestinal surgery segment dominated the market and accounted for largest market share of 35.5% in 2019. This is owing to the increasing number of GI procedures and availability of various applications in the field of GI such as abdominal related illnesses. This disease includes a wide spectrum of disorder affecting pancreas, biliary system, liver, oropharynx, and alimentary canal. According to the Gastroenterology Associates of Pensacola, each year there are more than 60.0 million Americans diagnosed with a digestive disorder.

The Gastroesophageal Reflux Disease (GERD) segment is growing at a fastest pace owing to increasing incidence of disease and technological advancement in surgical procedures. According to the Society of American Gastrointestinal and Endoscopic Surgeons, GERD accounted for 8.9 million medical visits annually with an estimated annual cost of USD 24.0 billion dollars in 2017. Moreover, this disease often requires lifelong management and is also associated with several health risks including esophageal stricture, adenocarcinoma, and esophagitis. Endoluminal suturing is one of the preferred therapeutic solution for this condition, thus, the segment is expected to drive the market for endoluminal suturing devices during the forecast period. 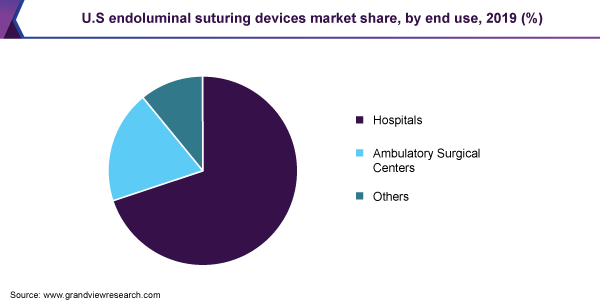 North America dominated the endoluminal suturing devices market and accounted for 44.1% revenue share in 2019. This is owing to the presence of a large patient pool and favorable reimbursement policies. Increasing number of bariatric surgeries is expected to show direct positive impact on the growth of the market for endoluminal suturing devices. According to the American Society of Metabolic and Bariatric Surgery, approximately 252,000 bariatric surgical procedures were performed in the U.S in 2018 up from 158,000 in 2011.

In Asia Pacific, the market for endoluminal suturing devices is expected to grow at the fastest pace due to improving healthcare infrastructure and the presence of a large population prone to various chronic diseases. Rising urbanization and various changing environmental and lifestyle factors are contributing to the rise of gastrointestinal disease throughout the region. Moreover, developing nations such as India and China are experiencing high demand for minimally invasive surgeries owing to the rise of various chronic and infectious diseases.

This report forecasts revenue growth at global, regional, and country levels as well as provides an analysis of the latest industry trends in each of the sub-segments from 2016 to 2027. For the purpose of this study, Grand View Research has segmented the global endoluminal suturing devices market report on the basis of application, end-use, and region.

How big is the endoluminal suturing devices market?

What is the endoluminal suturing devices market growth?

b. Hospital segment dominated the endoluminal suturing devices market with a share of 69.9% in 2019. This is attributable to the increasing incidence of chronic disease and rising number of bariatric surgeries.

Who are the key players in endoluminal suturing devices market?

What are the factors driving the endoluminal suturing devices market?

b. Key factors that are driving the market growth include the factors such as increasing incidence of obesity and the rising preference of minimally invasive weight loss surgeries.