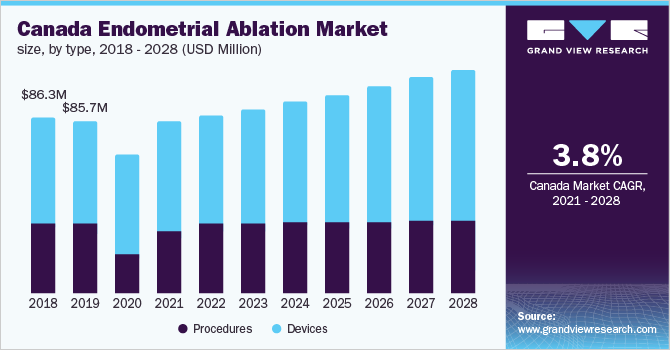 It has become possible to destroy the endometrium in-situ, in a day-care procedure, due to the advancement of minimally invasive endometrial ablation procedures. This procedure is less risky and technically simple to perform. According to the International Federation of Gynecology and Obstetrics (FIGO), Abnormal Uterine Bleeding (AUB) in the reproductive years has a significant global impact, with an incidence of around 3 to 30% among reproductive-aged women. Thereby, expected to propel the growth of the overall market.

Women’s health is a priority for governments and private organizations all around the world. One of the primary elements projected to drive the industry in developed countries is women's coverage plans. For instance, in India, numerous tax benefits and exemptions are available to women under various sections of the income tax legislation, one of which is the income tax deduction, which can be claimed on premiums paid for health insurance policies. Such initiatives with respect to women’s health may increase the adoption of treatment options available for them, thus, boosting the market growth.

Abnormal Uterine Bleeding (AUB) is the most common disorder among reproductive-aged women. AUB causes productivity loss and may necessitate surgical intervention. As per the National Health Portal India, between menarche and menopause, AUB is claimed to affect 9 to 14% of women. Each country’s prevalence varies. The frequency of AUB has been estimated to be around 17.9% in India. However, there are certain risk factors associated with the endometrial ablation procedures, which include infection, tearing of the uterine wall or bowel, which may hamper the market growth.

The healthcare system has faced extraordinary challenges as a result of the COVID-19 pandemic. Due to the fact that most services were classified non-urgent, all elective and outpatient interventional procedures were limited or stopped during the COVID-19 pandemic to curb the spread of the virus. Despite the fact that the number of elective surgeries performed increased by one-fifth as a result of the lockdown, COVID-19-related health-care reorganizations increased elective surgery waiting times by up to one-third. Although returning to baseline, the extended wait times may increase mortality and necessitate more complex surgeries in the near future.

The devices segment led the market in 2020 with a revenue share of more than 70%. Based on type, the market is segmented into devices and procedures. Endometrial ablation is a procedure for reducing severe menstrual bleeding by destroying the endometrium, a thin layer of tissue that lines the uterus. The number of women suffering from menorrhagia is on the rise, which is fueling the segment's growth. There are various techniques and devices, such as radiofrequency ablation where high-energy radio waves are used to destroy the endometrial tissue; cryoablation, where abnormal tissues are frozen and destroyed using an extremely cold liquid or a device called a cryoprobe; balloon therapy, where the endometrium is destroyed by injecting heated fluid into the balloon.

In 2020, radiofrequency ablation dominated the devices segment with a revenue share of 26.3% and is further expected to continue its dominance during the forecast period. The growth is driven by the product’s convenience, speed of treatment, efficacy, and cost-efficiency compared to other ablation devices. In addition, radiofrequency ablation devices are commonly available and are well-known among physicians. The thermal balloon segment is also expected to grow at a significant pace. It is a less invasive alternative to hysterectomy and is particularly hygienic as it employs a single-use disposable catheter balloon cartridge and has been approved by the US Food and Drug Administration (FDA) for the treatment of menorrhagia in women.

The hospital segment held the largest revenue share of over 55% in 2020. This is attributed to an increase in the number of patients being hospitalized for gynecological disorders, as hospitals provide excellent care as well as reimbursements. Also, hospitals possess advanced treatment devices, which contributes to the expansion of this segment. In addition, due to the ease of managing any problems that may develop during surgical procedures and the availability of a wide range of treatment options in the facility, hospitals see a substantially higher inflow of patients for gynecological treatments than other healthcare settings. 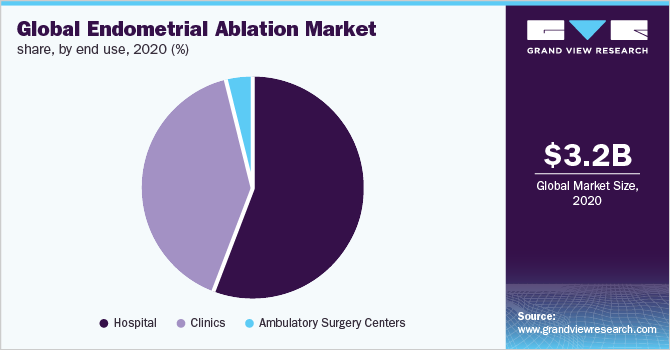 The Ambulatory Surgery Center (ASC) is expected to exhibit the fastest growth rate during the forecast period, as a result of an increase in the number of ASCs. These healthcare settings offer more cost-effective services and a much more convenient environment, personalized treatment. Moreover, ASCs have less waiting time, minimal or no risk of Hospital-Acquired Infections (HAIs), and shorter stay duration. All these factors are expected to contribute to the rising demand for these facilities.

North America dominated the market and accounted for the largest revenue share of 33.6% in 2020. Rising cases of gynecological disorders, improvement in healthcare infrastructure, and a strong foundation of top industry players to deliver cutting-edge endometrial ablation devices are expected to drive market growth in the region. In the U.S., patient outcomes and safety are of the utmost importance, and various projects have been established to improve healthcare quality and lower costs. Higher healthcare spending in North America than any other region is another factor contributing to the market growth.

In Asia Pacific, the market is estimated to witness significant growth during the forecast period. The COVID-19 pandemic has highlighted the region’s health system’s inadequacies and flaws, as well as the interdependence of health security and economic stability. As a result, the region is making progress toward its objective of obtaining Universal Health Care, or UHC. Furthermore, the market is expected to develop due to an increase in the prevalence of menorrhagia and a rise in demand for innovative technology.

With a significant number of global and local manufacturers, the market is highly competitive. To acquire a significant share of the market, major companies are implementing various growth methods, such as new product development, product differentiation approaches, and financing and international strategy. For instance, in February 2021, CooperSurgical acquired AEGEA Medical and its MaraTM Water Vapor Ablation System. Some of the major participants in the global endometrial ablation market are:

This report forecasts revenue growth at global, regional, and country levels and provides an analysis of the latest industry trends in each of the sub-segments from 2016 to 2028. For the purpose of this study, Grand View Research has segmented the global endometrial ablation market report on the basis of type, end-use, and region:

How big is the endometrial ablation market?

b. The global endometrial ablation market size was estimated at USD 3.2 billion in 2020 and is expected to reach USD 3.8 billion in 2021.

What is the endometrial ablation market growth?

Which segment accounted for the largest endometrial ablation market share?

b. North America dominated the endometrial ablation market with a share of 33.6% in 2020. This is attributable to rising cases of gynecological disorders, improvement in healthcare infrastructure, and a strong foundation of top industry players to deliver cutting-edge endometrial ablation devices.

Who are the key players in endometrial ablation market?

What are the factors driving the endometrial ablation market?

b. Key factors that are driving the market growth include rising number of uterine problems and growing demand for minimally invasive surgeries.