The global endoscopy devices market size was valued at USD 35.14 billion in 2018 and is anticipated to grow at a CAGR of 7.4% over the forecast period. Increase in preference for minimally invasive endoscopic procedures and global geriatric population are key factors boosting demand for endoscopes. The market is also being driven by an increase in prevalence of gastrointestinal, urological, gynecological, and respiratory disorders, which necessitates endoscopic procedures for diagnosis & treatment. Rise in adoption of endoscopes and visualization systems in healthcare settings, coupled with technological advancements, is aiding growth.

Significant increase in prevalence of age-related diseases and rise in demand for endoscopy devices in diagnostic & therapeutic procedures are factors driving the market. The use of such devices in diagnosis and treatment of multiple conditions is essential as it enables minimal intervention, resulting in a shorter recovery time. Geriatric population is known to be prone to medical conditions that need endoscopic procedures, such as intestinal perforation, gall stones, pelvic abscess, endometriosis, and liver abscess. According to a study by Population Reference Bureau, the number of people aged 65 years or above in the U.S. was estimated at 52.0 million in 2018 and is expected to cross 95 million by 2060. This is projected to boost the demand for endoscopic procedures over the forecast period. 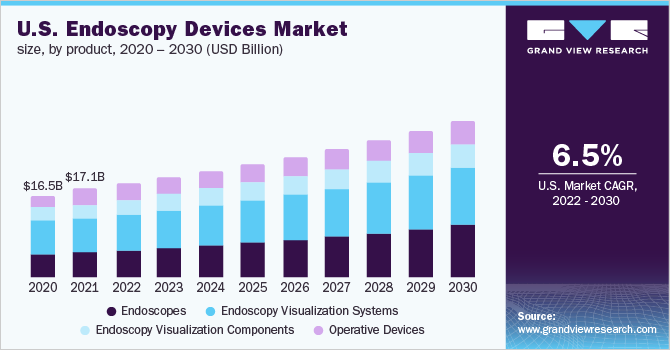 Increase in prevalence of cancer & obesity and the introduction of endoscopic bariatric surgeries-owing to growing trend of preventive healthcare-are key factors contributing to growth of this market. According to estimates by International Agency for Research on Cancer, in 2018, global cancer burden was estimated to reach 18.1 million new cases and 9.6 million cancer-related deaths were anticipated. Cancer burden is anticipated to increase to 22 million by 2034.

Lung, colorectal, and female breast cancers are among the top five cancers in terms of mortality. Endoscopic procedures, such as laryngoscopy, colonoscopy, and upper endoscopy, are used to diagnose cancer, which is also projected to increase demand for endoscopic devices. Various initiatives undertaken for creating awareness about early cancer diagnosis are also boosting the demand for cancer screening procedures, thereby positively impacting the market.

The endoscopes segment is expected to grow at a lucrative CAGR of 8.8% over the forecast period. Flexible endoscopes accounted for the highest revenue share in 2018, owing to increasing preference due to better ergonomics, safety, and efficacy over rigid endoscopes. Increased focus of manufacturers on offering training for optimal use of advanced flexible endoscopes is further expected to positively impact the market.

Endoscopy visualization components registered a significant growth in global endoscopy devices market, wherein HD monitors accounted for the highest revenue in 2018. Technological modifications, such as camera heads with optical zoom that allows magnification adjustment without hampering image resolution, and rise in public & private sector investments are among the major factors aiding growth of the global market.

In 2018, GI endoscopy was the largest application segment and accounted for a revenue share of 54.6%. The increasing burden of GI diseases, coupled with growing geriatric population, is driving the demand for GI endoscopy. GI tumors are the second largest cause of cancer-related deaths worldwide. Endoscopy has proved to be the gold standard for diagnosis of GI cancers. Thus, increase in endoscopic procedures for early diagnosis of GI cancers is expected to offer considerable revenue opportunities in the market.

Urology endoscopy, also known as cystoscopy, is expected to grow at the fastest rate of 9.0% over the forecast period. Increase in factors such as the overall geriatric population, prevalence of urinary disorders, and the number of ureteroscopic interventions performed have further boosted demand for these endoscopy devices. According to a 2019 report published by the American Cancer Society, an estimated 80,470 people in U.S. are diagnosed with bladder cancer annually. An estimated 17,670 deaths due to bladder cancer are expected to occur in 2019. Thus, demand for urology endoscopes is expected to increase over the coming years.

In addition, introduction of advanced endoscopic techniques in urology, such as robot-assisted endoscopes or disposable endoscopes, is among the top contributing factors driving the market. Moreover, ongoing product approvals by the FDA for urological endoscopy, such as the single-use cystoscope named Uro-V by UroViu Corporation, are expected to drive the market.

In 2018, hospitals emerged as the largest end-user segment. As hospitals are the primary health system in a majority of countries, the number of endoscopic surgeries undertaken at hospitals is comparatively higher than the other health systems, such as Ambulatory Surgical Centers (ASCs) or specialty clinics. Therefore, the demand for endoscopy devices in hospitals is comparatively higher than that in other end-use segments. Hospitals is expected to maintain its dominance due to the abovementioned factor. 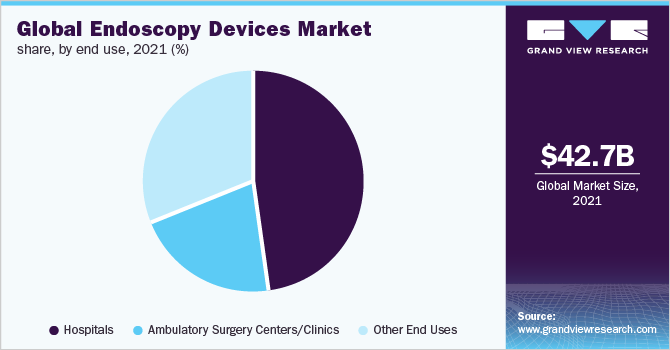 The ASCs segment is expected to grow at a significant growth pace over the forecast period. Increasing preference for outpatient surgeries, increase in minimally invasive surgeries, and cost-effectiveness of ASC-based endoscopic procedures are key factors enabling a lucrative growth of this segment. Conversely, lower postsurgical complications in minimally invasive endoscopic surgery are expected to increase the demand in ASCs. Other end users include diagnostic centers, research centers, and specialty clinics. Increase in number of endoscopic procedures for early diagnosis of cancer and technological advancements in endoscopes, visualization systems, & components are collectively aiding the demand for endoscopy devices. These advancements include portability, HD imaging, and microendoscopy, which enable accurate diagnoses and are, therefore, positively impacting demand for endoscopic procedures at diagnostic centers.

In 2018, North America accounted for a leading revenue share, owing to high prevalence of diseases such as bladder & colon cancers, increase in preference for minimally invasive surgeries, and rise in elderly population. In addition, increasing adoption of robot-assisted endoscopes used for diagnostic and surgical procedures is further contributing to market growth.

The U.S. accounts for largest revenue share within North America. Increasing demand for laparoscopies and colonoscopies in the U.S., owing to increasing prevalence of colorectal cancer, can be attributed to the country’s leading revenue share. According to a report by American Cancer Society, colorectal cancer is the third most frequently diagnosed cancer, with 101,420 new cases expected to be recorded in 2019. Moreover, increasing awareness about advantages of endoscopy and strong presence of domestic manufacturers also contributes to the region’s leading revenue share.

Asia Pacific is anticipated to be the most lucrative region, accounting for the highest CAGR of 8.6% during the forecast period. Growing economies of India and China are expected to be significant contributors in this region. This can be attributed to substantial economic growth, increasing prevalence of cancer, improving healthcare infrastructure, and increasing demand for advanced diagnostic therapies.

This report forecasts revenue growth at global, regional, & country levels and provides an analysis on latest industry trends in each of the sub-segments from 2014 to 2025. For the purpose of this study, Grand View Research has segmented the global endoscopy devices market report on the basis of product, application, end use, and region: