The global energy drinks market was valued at USD 43 billion in 2016. The industry is expected to witness a high growth on account of growing consumer’s health consciousness and hectic lifestyle. These beverages are intended to give instant energy along with providing mental and physical stimulation. The main ingredient, which helps in providing stimuli, is caffeine. Taurine is another major component, which is essential for cardiovascular function and skeletal muscle development.

On account of increasing health awareness and busy lifestyle coupled with growing consumer awareness regarding health benefits of the product are steering the demand for energy drinks in North America. Almost 60% of the male and 40% of the female population in the US is addicted to these beverages and it is further expected to boost the regional market. 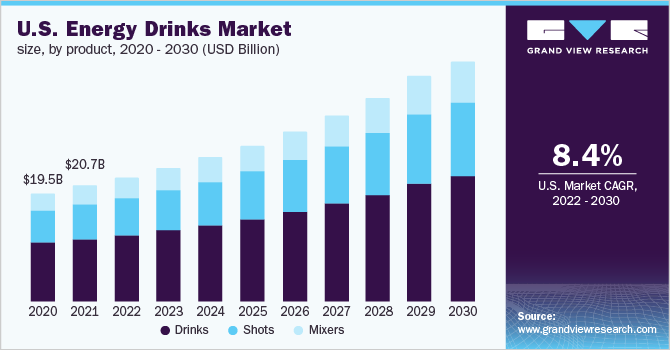 Energy beverages consumption has turned into a status symbol, especially for the youth. Such consumer behavior type is expected to drive further the overall demand. Consumption of alcohol mixed with these energy beverages is quite popular in urban areas. Moreover, some of the regular party goer’s prefer mild alcoholic beverages, this has led to high demand for alcoholic energy drinks which contains an average of around 2% to 5% of alcohol by volume especially in the mature economies such as UK, Australia, the U.S., and Spain. Energy drink manufacturers claim that these beverages reduce muscle fatigue, ease the mental process, and protect heart health. However, a scientific consensus is yet to be achieved to support these statements. Increasing health consciousness along with changing consumer lifestyle and rising awareness towards health wellness products are the key factors expected to steer future demand.

These substitutes are low in cost as compared to some of the energy products. There has been rising concern over these beverages consumption on account of the caffeine presence. Excess use has been associated with health risks, which include sleeplessness, frequent urination, and abnormal heart rhythms. Such health risks associated are expected to restrain global industry demand over the forecast period.

The non-alcoholic segment is projected to witness high consumption growth rates and overtake the alcoholic sector to emerge as the largest segment by the next five years. Growing awareness among the consumers about its benefits and the ill effects of consumption of its counterparts are projected to aid the global market.

The non-organic segment is expected to remain the largest product variant and is anticipated to account for a revenue of USD 35.34 billion by 2025. Due to high initial market penetration and no specific focus on the target market, these products are projected to aid the market. At the same time, lack of customer awareness about the choice of products and these happen to be cheaper than their counterparts.

The organic segment is expected to emerge as the fastest product type segment in 2015. The growing consumer trend towards the importance of organic food and beverages in their dietary habits has positively influenced the segment demand in the industry.

The organic and natural energy drinks market will increase in countries such as Germany, China, India, and U.K., owing to increasing stringent regulations in the region. Low-sugar energy beverages provide great opportunities to the industry participants in the near future.

The adults were the largest and fastest target consumer segment and is expected to grow at a CAGR of 7.4% from 2016 to 2025. There is a growing population of athletes and corporates, who consumes these products for an extra shot of energy to increase their performance. This is expected to aid the growth of these products in the future.

The teenager consumer category has been projected to observe moderate growth and penetration in the global market and the consumption of energy drinks by teenagers happens to be a status symbol for the population, which will increase the market growth over the estimated year.

Energy drinks demand in the on-trade sector dominated the global industry on account of well-established marketing channels and long-term collaborations with the sellers. Moreover, it is easily approachable to consumers in places like such as bars, coffee shops, hotels, etc. 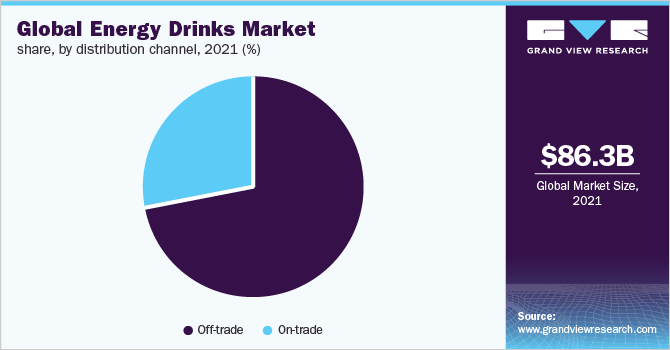 The off-trade sector is expected to witness sluggish growth over the forecast period owing to shifting consumer preference towards direct selling and stringent norms regarding collaborations with supermarkets and other retail outlets. The segment is predominantly characterized by free in-store sampling and bulk discounts requiring additional investments for advertisements and promotions.

Asia Pacific held the highest regional demand where young adult population mostly drives the market. India and China have shown significant growth in the retail sector, which shows ample opportunities for marketing the product in the region. The rising popularity of sports in China has a huge potential for promoting their brand and create a sense of recognition and loyalty among the customer.

The population in Thailand consider energy drinks as functional, in the sense that it helps them stay awake and work harder. Sponsoring sports events and competitions from key players and marketing of these beverages under the pretext of music festivals are expected to continue from the key player’s end to capture mass sales.

The North America energy drinks market has generated the largest turnover over the past several years. It was valued at USD 15.44 billion in 2016 and is expected to grow at a CAGR of 7.1% from 2016 to 2025. Due to rapid urbanization, many people live a very hectic lifestyle in the U.S. This has resulted in an increased dependence on energy drinks to boost them with an instant drive. Also, these drinks are marketed as a healthier alternative to carbonated beverages, especially for health-conscious people.

Middle East and Latin America are emerging markets that are expected to grow at an increasing rate as a result of increased marketing efforts by the major market players.

Manufacturers concentrate on product innovation to gain first-mover advantage. Companies have been continuously trying to differentiate their products from the competitors to penetrate the existing market. Red Bull separates its products with the help of taurine and positions itself as a premium product by selling at a high price. Moreover, companies such as RedBull and Monster have penetrated the industry to a great extent by sponsoring premium sports events such as Moto GP, Formula One, MotoCross, and mountain biking.

This report forecasts revenue growth at global, regional & country levels and provides an analysis of the industry trends in each of the sub-segments from 2014 to 2025. For the purpose of this study, Grand View Research has segmented the global energy drinks market on the basis of product, product type, target consumer, distribution channel, and region: