The global enzymatic wound debridement market size was valued at USD 692.69 million in 2018 and is expected to grow at a CAGR of 5.8% over the forecast period. Market demand is rising owing to an increase in the prevalence of chronic diseases, a high number of accidents, and the introduction of technologically advanced products across the globe. 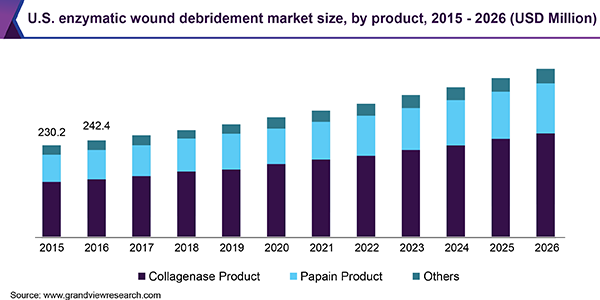 The global increase in the incidence of chronic diseases such as diabetes, cancer, and other autoimmune diseases is one of the major factors boosting growth. According to the National Diabetes Statistic Report 2017, published by the CDC, more than 100 million people in the U.S. are living with diabetes or prediabetes. Moreover, as per the International Diabetes Federation, the global prevalence of diabetes is expected to increase from 366.0 million in 2011 to 552.0 million by 2030. Since prolonged diabetes may lead to diabetic foot, rising incidence of diabetes is expected to positively impact growth. Collagenase- and papain-based products are majorly used for the treatment of diabetic foot ulcers, venous leg ulcers, and pressure ulcers.

According to WHO, cancer is the leading cause of death globally and almost one in six deaths occurs due to cancer. Also, over 70% of cancer-related deaths occur in middle- and low-income countries. Cancer is considered to be a huge healthcare burden globally as it is the second leading cause of death. According to the CDC, about 1,658,716 new cases of cancer were reported in the U.S. in 2016. Chronic diseases are also a major healthcare concern in the U.S. with over half of the adult population suffering from chronic diseases, contributing to over 75% of the total healthcare cost in the country.

Collagenase-based enzymatic wound debridement products are predominantly used for treating surgical wounds. Most surgical wounds after cancer surgery are relatively large and deep, which produce exudate that requires regular management. Thus, the proper use of these products helps manage large wounds, which significantly reduce the risk of infection. Therefore, the rising incidence of chronic diseases is anticipated to increase the demand for enzymatic wound debridement products, thereby propelling market growth over the forecast period.

An increasing number of accidents, such as road accidents, burns, and trauma, across the globe is also anticipated to impel growth. For instance, as per WHO (2018), annually, around 1,000,000 people were severely or moderately burnt in India. Also, as per NCBI, in 2017, countries such as Bulgaria, Finland, the Netherlands, China, Australia, and the U.K. reported a rise in the incidence of burn wounds. Furthermore, as per the American Association for the Surgery of Trauma, in 2017, around 1.2 million people died globally, accounting for deaths of around 3,242 people per day in road accidents every year. Thus, a rise in the number of accidents is expected to boost demand for enzymatic wound debridement products, which is expected to lead to considerable growth over the forecast period.

Based on type, the enzymatic wound debridement market is divided into acute and chronic wounds. The acute wounds segment dominated the market in 2018. They include burns abrasions, lacerations, incisions, and puncture wounds. An increase in the number of burn injuries across the globe is one of the major factors driving the segment growth. Every year, around 50.0% of the population globally is at risk of fire-related traumas, of which 90.0% of the cases occur in moderate- and low-income countries. As per WHO, annually, there are over 1,000,000 reported cases of moderate or severe burns. Thus, the segment is expected to grow at a significant rate over the forecast period.

The chronic wounds segment is anticipated to witness the fastest growth over the forecast period. Chronic wounds include diabetic foot ulcers, venous leg ulcers, and pressure ulcers. Pressure ulcers, among other chronic wounds segment, are anticipated to witness the fastest growth over the forecast period. Pressure ulcers are also known as bed sores and usually occur due to prolonged intense pressure on the skin. Prolonged hospital stay is the most common cause of such ulcers. They are common in the geriatric population and generally occur at bony areas such as ankles, hips, and tailbone. Rising the geriatric population across the globe is a major factor in aiding segment growth. Moreover, an increase in the number of surgeries and a rise in the prevalence of various diseases that require prolonged hospital stay are among factors expected to drive segment growth

Collagenase-based enzymatic wound debridement products are easily available and are commonly used by medical professionals. Rising prevalence of pressure ulcers, diabetic foot ulcers, and venous leg ulcers is anticipated to contribute to segment growth. For instance, as per NCBI, in 2018, the prevalence of pressure ulcers in nursing home patients was 11.0%. These ulcers majorly occur over the heels or sacrum. Also, as per NCBI, venous leg ulcers are common in several countries, especially in the U.S. and Northern Europe. Therefore, this segment is expected to exhibit significant growth over the forecast period. Collagenase SANTYL ointment is one of the most commonly used enzyme debridement products offered by Smith & Nephew.

Based on end-use, the enzymatic wound debridement market is divided into hospitals, home care, and others. Hospitals held the largest market share in 2018 owing to the rising incidence of chronic wounds. Besides, increasing incidence of diabetic foot ulcers and venous leg ulcers is among the major factors driving the segment growth. Moreover, increasing the incidence of surgical wounds due to a rise in the number of surgeries is also boosting segment growth. Enzymatic wound debridement is also used for healing surgical site infections. Thus, these factors may fuel segment growth over the forecast period. Homecare is expected to witness the fastest growth over the forecast period. Most surgeries require a prolonged recovery period, leading to frequent changing of dressings. Thus, the demand for wound debridement products in home healthcare settings is increasing. Moreover, the geriatric & bariatric population and patients suffering from chronic wounds prefer homecare over hospital stay.

The Asia Pacific is anticipated to witness the fastest growth over the forecast period. The presence of developing countries such as China, India, and Japan is anticipated to boost growth in the Asia Pacific. Besides, the rapidly growing medical tourism sector in these countries can also be attributed to an increase in demand for enzymatic wound debridement products. For instance, as per the report on Export Health Services by Directorate-General of Commercial Intelligence and Statistics of India, from 2015 to 2016, India issued about 58,300 medical visas to tourists.

Some prominent players are ConvaTec, Smith & Nephew, Mölnlycke Health Care, B.Braun, and Integra Lifesciences. They are adopting strategies such as mergers & acquisitions, collaborations, and partnerships to strengthen their presence. For instance, in July 2017, Smith & Nephew collaborated with the University of Hull for the advancement of wound care technologies, which might increase the company’s share. Also, in July 2018, Mölnlycke Health Care AB acquired SastoMed GmbH. This deal is anticipated to expand the wound care portfolio of the company.

This report forecasts revenue growth at global, regional, and country levels and provides an analysis of the latest industry trends in each of the sub-segments from 2015 to 2026. For this study, Grand View Research has segmented the enzymatic wound debridement market based on type, product, end-use, and region:

How big is the enzymatic wound debridement market?

b. North America dominated the enzymatic wound debridement market in 2019 with a market share of more than 42.00%. Increasing sports injuries, road accidents, and presence of several key players is anticipated to drive the market.

Who are the key players in the enzymatic wound debridement market?

What are the key trends of the enzymatic wound debridement market?

b. Key factors that are driving the market growth include increasing prevalence of chronic diseases, rising cases of accidents, and the introduction of technologically advanced products across the globe.