The global enzyme replacement therapy market size was valued at USD 6.74 billion in 2018 and is expected to grow at a compound annual growth rate (CAGR) of7.7% from 2019 to 2026. The rising availability of enzyme replacement therapies, increasing awareness, and less stringent guidelines for rare diseases are key factors driving market potential. According to the Genetic and Rare Diseases Information Center, a rare disease is defined as a disease that affects lesser than 200,000 individuals. Strategic initiatives are being undertaken by various organizations to create awareness regarding these diseases to increase patients’ lifespan. 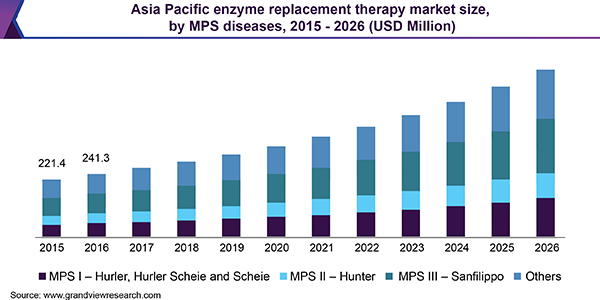 According to estimates from Genetic Alliance UK, a single rare disease is estimated to affect over 30,000 individuals in the UK. As a majority of chronic diseases are life-threatening, timely medical treatment is crucial to decrease mortality rates. The most commonly occurring lysosomal storage diseases include Gaucher, Fabry, Pompe, various forms of MPS, and SCID diseases. Rare diseases such as these occur in low frequencies. For instance, according to Orphanet, Gaucher’s disease is estimated to be prevalent in 1 individual in over 100,000 individuals. The low prevalence of rare or orphan diseases is one of the key factors for its limited growth in the pharmaceutical industry.

Rising awareness and an increasing number of market players venturing into orphan disease management are key factors propelling the market growth. Orphan drugs that are used to treat these diseases are anticipated to flourish during the forecast period owing to the rising number of players investing in R&D to treat these rare diseases.

The Orphan Drug Act of 1983 is a U.S. public law that has been crucial in the development of novel drugs for the treatment of Tourette syndrome myoclonus, ALS, muscular dystrophy, and Huntington's disease. Following the approval of the act, several regions such as Australia, the European Union, and Japan followed suit to facilitate enhanced treatment for orphan diseases, propelling the market growth.

Rising use of pancreatic enzymes such as amylase, lipase, and protease are used for the treatment of exocrine pancreatic insufficiency (EPI) seen commonly in cancer patients. Estimates from the American Cancer Society indicate that over 55,440 individuals were anticipated to be diagnosed with pancreatic cancer in the year 2018. Rising incidence of pancreatic cancer is thus expected to drive market growth during the forecast period.

Agalsidase beta which is used for the treatment of Fabry’s disease is anticipated to witness a CAGR of 14.1% during the forecast period. Sanofi Genzyme’s Fabrazyme is an enzyme replacement therapy used for the treatment of inherited disease. It works by replacing the enzyme responsible for low levels of GL-3 which is absent or deficient in individuals suffering from Fabry’s disease.

As the majority of these diseases are genetically acquired, early treatment is key in decreasing mortality rates. Rising awareness related to these diseases has been key in the increasing demand for enzyme replacement therapy products. Thus, enzymes are anticipated to witness lucrative growth over the forecast period.

Gaucher disease is an inherited disease caused due to recessive mutation. According to statistics from the U.S. National Library of Medicine the disease is estimated to occur in one individual in 50,000 to 100,000 individuals of the general population, based on the region. According to data from Clinicaltrials.gov, over 60 studies are being active for Gaucher’s disease primarily funded by pharmaceutical companies.

Diseases such as Fabry, Pompe, and MPS are also seen to be gaining traction in the market owing to rising awareness brought about by organizations such as NORD (National Organization for Rare Disorders), Global Genes, GARD (Genetic and Rare Diseases Information Center) and National Institutes of Health among others.

Thus, rising awareness among pharmaceutical companies and the general public are anticipated to further propel market growth soon. Diseases such as SCID and MPS are anticipated to gain considerable market share during the forecast period owing to the increasing number of large pharmaceutical companies such as Pfizer and Shire investing heavily in the development of rare disease drugs.

Based on the route of administration, the enzyme replacement therapy market is divided into oral and parenteral routes. Parenteral route of administration held the largest market share in 2018 owing to its ability to facilitate rapid absorption and drug delivery. A large number of market players offer a wide range of parenteral enzyme replacement therapy; thus, this segment is anticipated to witness the highest CAGR during the forecast period.

Convenience in terms of storage, pre-measured doses, portability, and non-invasive nature of this route are some of the major factors that further accelerating oral drug adoption in the market. For instance, ZAVESCA is an oral drug developed by Actelion Pharmaceuticals Ltd which is used to treat Gaucher’s disease. 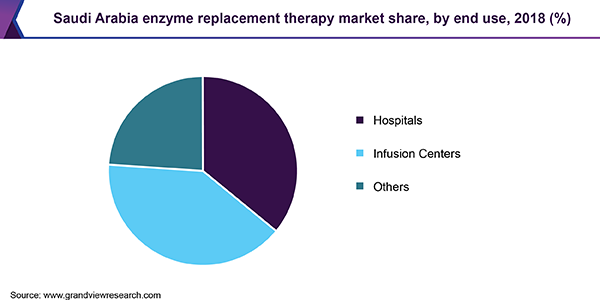 A considerable number of sustained and controlled release dosages are being preferred for the treatment of lysosomal storage diseases. These dosages tend to have a longer therapeutic effect leading to their preference over other conventional forms of drug delivery. Technologies such as microencapsulation and targeted delivery are being considered as options for enzyme treatment therapy.

Based on end-use, the market is segmented into hospitals, infusion centers, and others. Hospitals are the primary care settings facilitating easy treatment for a wide range of diseases. Thus, these end-use settings held the largest market share owing to frequent visits by patients and their ability to cater to a varied range of lysosomal storage diseases.

Infusion centers are anticipated to gain the highest CAGR during the forecast period. Since these centers are specialized centers for IV infusions, they facilitate easy treatment for a wide range of inherited diseases. In some instances, specialized staff performs infusions at home enhancing the patient experience.

Other end-use settings that offer enzyme replacement therapy consist of specialty clinics and home care settings. These are also anticipated to gain considerable market share during the forecast period owing to effective therapies and easy treatment options. [email protected] is a home enzyme therapy program that involves a professional team of registered nurses and physicians. Such initiatives are typically applicable for geriatric and pediatric populations wherein home infusion proves to be an easy and effective option.

North America dominated the market in 2018. Well-developed healthcare infrastructure and the presence of leading market players in North America have fueled the growth of the regional segment. Moreover, the adoption of advanced technologies and increased focus on drug development in this region is expected to drive the sector growth.

According to statistics from the Fabry Outcome Survey prepared by Shire Outcome Surveys, Germany, Japan, and the UK exhibit the highest incidence of Fabry’s disease. Data from FDA’s Novel Drug Approvals indicate that over 39% of novel drugs approved in the year 2017 were for orphan diseases. Factors such as these are anticipated to further propel regional market growth.

The market constitutes a large number of global as well as local players. The majority of these market players have a well-established portfolio of lysosomal storage diseases facilitating easy and effective treatment.

Some of the leading market players, which include Shire Plc, Sanofi S.A., AbbVie, and Allergan plc, have a strong geographical presence in terms of a distribution network and operating facilities. Key players are mainly focused on developing and marketing drugs solely focused on rare and genetic diseases. For instance, the Shire, plc has over 40 products that are sold globally solely centered around rare and orphan diseases. The company is also focused on creating significant awareness related to these diseases and hence constantly undertakes various campaigns to facilitate cognizance. Rare Count is one such imitative launched by the company in February 2017. This initiative was launched to create awareness of the orphan disease among the general population.

Also, mergers, acquisitions, and strategic agreements are some of the initiatives being undertaken by key players, which are expected to propel the enzyme replacement therapy market. The majority of the players are focusing on the development of new products. Various companies are also engaged in the licensing and distribution of drugs to aid patients more effectively. Some of the prominent players in the enzyme replacement therapy market include:

This report forecasts revenue growth at global, regional & country levels and provides an analysis of the industry trends in each of the sub-segments from 2015 to 2026. For this study, Grand View Research has segmented the global enzyme replacement therapy market report based on the enzyme, therapeutic condition, route of administration, end-user, and region:

How big is the enzyme replacement therapy market?

b. The global enzyme replacement therapy market size was estimated at USD 7.20 billion in 2019 and is expected to reach USD 7.70 billion in 2020.

What is the enzyme replacement therapy market growth?

b. Gaucher's disease dominated the enzyme replacement therapy market with a share of 32.09% in 2019. This is attributable to the high incidence of Gaucher’s disease globally.

Who are the key players in enzyme replacement therapy market?

What are the factors driving the enzyme replacement therapy market?