The global epilepsy drugs market was valued at USD 4,100 million in 2015. The expected launch of drugs currently in the pipeline, such as Ganaxolone by Marinus Pharmaceuticals, Inc., Perampanel by Eisai Co., Ltd., USL261 by Upsher Smith Laboratories, Inc., and YKP3089 by SK Life Sciences, Inc. is a high impact rendering driver of the epilepsy drugs market. 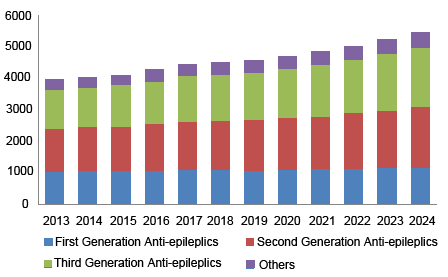 In 2013, 4.3 million adults and 750,000 children of 0-17 years were diagnosed with epilepsy. The rising prevalence of epilepsy and the increasing demand for third-generation anti-epileptic drugs, such as Zebinix, Sunovion, Stedesa, Trobalt, and Potig, are expected to fuel the epileptic drug market growth over the forecast period.

The rising awareness levels about epilepsy coupled with strategic alliances are anticipated to stimulate the market growth. The awareness initiatives by epilepsy networks have led to an increase in demand for better diagnosis and effective treatment of the disease. For instance, in 2009, the Epilepsy Association of Nova Scotia and the Anita Kaufmann Foundation together announced March 26 as the “Purple Day” internationally to increase the worldwide awareness about epilepsy.

The second generation anti-epileptic drug class includes Lamotrigine (Lamictal), Levetiracetam (Keppra), Brivaracetam (Briviact), and Perampanel (Fycompa). The second generation drug class dominated the market in 2015 owing to its high tolerability and safety due to the launch of highly potent drugs, which employ novel mechanisms of action. In February 2016, the FDA approved the Briviact, which is used to treat the partial onset of seizures in people aged 16 years and above.

The third generation drug class is expected to witness the fastest growth of over 4% over the forecast period owing to the rising penetration and the increasing adoption of these drugs, such as Lacosamide, Retigabine, and Eslicarbazepine.

North America is the most mature market with respect to the epilepsy drugs. It is expected to grow at a CAGR of over 2.5% during the forecast period to reach an estimated value of over USD 2,500 million by 2024.

The presence of favorable government initiatives, extensive research and development efforts undertaken, and the launch of new generation anti-epileptic drugs are the drivers expected to propel the growth of this market. For instance, in 2014, Eisai Co. Ltd. launched two new drugs, the AMPA receptor antagonist Fycompa and Trobalt in the U.S. and in other 35 countries.

Asia Pacific is expected to witness robust growth from 2016 to 2024 as a result of the rising patient awareness regarding effective treatment of epilepsy and the presence of high-unmet medical needs in emerging economies of India and China.

Most of the key players are focusing on the expansion of their businesses to increase their market share. Also, they are adopting certain strategies, such as new product development, mergers, and acquisitions. Recently, in February 2016, Eisai Co., Ltd. entered into an agreement with Esteve (Spanish pharmaceutical company) to co-promote the anti-epileptic drug, Fycompa in Spain.