The global eSIM market size was valued at USD 8.03 billion in 2019 and is expected to expand at a Compound Annual Growth Rate (CAGR) of 15.8% from 2020 to 2027. The rapid increase in the number of IoT connected devices in different end-use verticals such as automotive, consumer electronics, and energy and utilities, is propelling the market growth. Moreover, eSIM technology has led to advancements in the connected ecosystem by enabling secure Machine-to-Machine (M2M) communication. Thus, eSIM offers secure, reliable, and cost-efficient cellular connectivity for IoT/ M2M applications owing to which there has been increased adoption of the wireless cellular-based solution such as eSIMs among different end-use verticals. 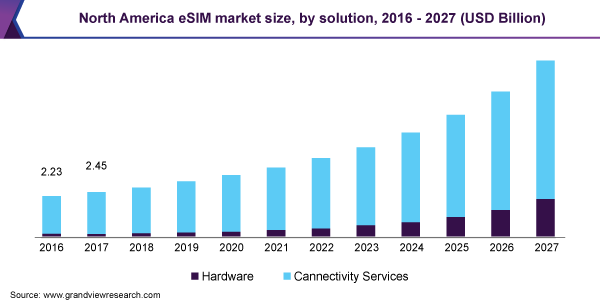 eSIM is a hardware chipset that is permanently installed in the device, on which the Mobile Network Operators (MNOs) can store their data through radio signals. Also, the size of the chipset is smaller than a nano sim and can be reprogrammed by the software; thus, eSIM provides all the services like the physical SIM cards. Moreover, eSIMs offer several benefits over traditional SIM cards, such as supporting multiple mobile carriers, which makes the subscription management easier for the device end-user; thus, eliminating the need for handling several physical SIM cards by the device end-user. Another benefit of eSIMs is their physical security, as they are directly soldered to the circuit of the device, it is impossible to tamper the device to remove the SIM for misuse. The aforementioned benefits are anticipated to fuel the growth of the market.

Additionally, a significant factor driving market growth is the increase in the number of M2M connections globally. As the communication in M2M connections is carried over the mobile networks, these SIMs play a significant role in wireless communication in the connected ecosystem. Moreover, remote provisioning and longer life span have resulted in increased adoption n the M2M applications such as smart meters, connected cars, and retail POS. Also, they require lesser space in the M2M devices, thus making it an ideal preference among device manufacturers. Hence, the features and functionalities offered by eSIM for M2M applications have resulted in the adoption of eSIMs among device manufacturers, thereby bolstering the market growth.

The rapid increase in the number of IoT connected devices in consumer electronics and M2M applications is propelling the market growth. Rise in the eSIM technology paced up significantly in 2020. There had been an increase in the number of times eSIM profiles were downloaded across the consumer devices. Commercial eSIM services for smartphones had been launched in at least 69 countries around the world – a threefold rise as compared to 2018.

After a slow start in 2017–2019, eSIM smartphone commercialization accelerated in 2020. In 2020, 27 models were launched regardless the challenges of the pandemic (e.g. nation-wide lockdowns and temporary closure of retail outlets). Huawei and Samsung also launched their first eSIM smartphones, nearly 18 months after Apple’s launch of eSIM in iPhones (September 2018). With 5G gaining impetus, the launch of 5G smartphones with eSIM technology by Apple, Huawei, Google, Samsung and Motorola (a total of 17 models) was an added milestone in 2020.

Emergence of eSIM in the automotive industry has given great flexibility to enable trucks and cars with cellular connectivity, while unlocking new capabilities and features. Within the next few years, it is projected that all cars built will be cellular-enabled, leading to an improved driving experience made possible by innovative connected services. Of late, the automotive sector took a huge dive in enabling the next generation of connected cars by supporting the GSMA Embedded SIM Specification to reinforce vehicle connectivity. This, in turn is expected to provide enhanced security for a range of connected services.

The advent of industry 4.0 represents an industrial revolution, which has introduced smart machines with an automated communication and control method. Industry 4.0 is a connected environment, in which the actionable data and information between Machine to Machine (M2M) and machine to other assists in exchanged via Internet of Things (IoT) enabled devices. M2M systems include Wi-Fi or cellular communication links, RFID, sensors, and automatic computing software to interpret data and transmit it through a network for further processing. M2M systems often use public networks and cellular network for internet connectivity. These factors have propelled electronic manufacturers to integrate eSIM (embedded SIM cards) with M2M systems, thereby contributing to the market growth.

M2M systems offer benefits such as reduced maintenance costs and downtime, real-time data monitoring, identifying service timings, remote operation, and low power consumption. Owing to these benefits, M2M systems have been adopted across several sectors, including manufacturing, security, telemedicine, robotics, automotive, industrial, and utilities. Furthermore, factors such as longer life span and remote provisioning have resulted in the increased adoption of M2M systems in applications such as retail POS, smart meters, and connected cars. This, in turn, calls for improved network connectivity, wherein eSIM plays a significant role by offering wireless communication over mobile networks in a connected system.

The integration of eSIM technology with M2M systems has led to advancements in the connected ecosystem by enabling M2M communication. eSIM offers reliable and cost-effective cellular network connectivity for M2M applications. In the M2M business model, there is no interaction between the user and the device. The M2M eSIM model focuses on remote provisioning, thereby eliminating the direct interaction between the user and the device. The integration between eSIM and M2M systems solves the challenge of controlling and managing multiple M2M devices remotely when the operator is in the field.

The M2M model enables deployment on multiple systems on a single network while providing remote control of each system separately. This only requires eSIM IDs for each system to be sent to the operator. Furthermore, these systems can be managed and configured as required once they are connected to the network. Changes such as activation and deactivation of the operator profile are also possible remotely over the air. Owing to such features and functionalities, eSIM has witnessed wide adoption among the device manufacturers, thereby bolstering the market growth.

Meanwhile, the hardware segment is projected to witness a substantial CAGR of over 30% over the forecast period. The major growth contributor is the rising adoption in consumer electronic manufacturers. For instance, the growing trend among smartphone manufacturers to integrate eSIM in the device to save space is anticipated to fuel the demand and contribute to the segment growth.

In 2019, the M2M segment held a significant market share, accounting for more than 68.0% and is estimated to expand at a CAGR exceeding 14.0 % during the forecast period. The M2M application segment is further categorized into automotive, energy and utilities, and others. The growing penetration of the product in the automotive industry for M2M connectivity is bolstering the segment growth. Moreover, connected cars and emergency call systems are the key demand drivers in the automotive industry. 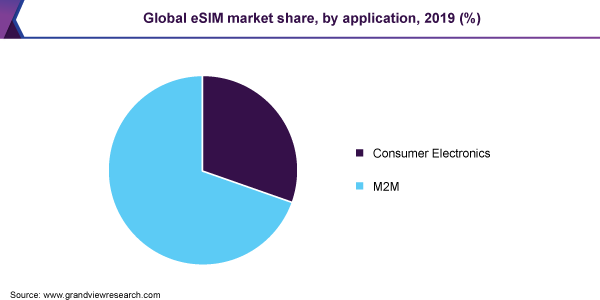 The consumer electronics segment is sub-segmented into smartphones, wearables, and others. The smartphone segment is estimated to expand at a CAGR of over 16.0% from 2020 to 2027. The use of eSIM in smartphones allows device manufacturers to utilize the space in the device as less space is required for the product. Hence, device manufacturers are adopting technology to design comparatively slimmer smartphones. For instance, in 2018, Apple Inc. and Goggle LLP introduced eSIM technology in their smartphones.

North America held the largest revenue share of over 35% in 2020 and is expected to continue dominating during the forecast period. A strong presence of the network providers and rapid technological advancements are anticipated to contribute to the growth. Europe is expected to grow at a CAGR of over 9.6% during the forecast period. The presence of major market players such as Giesecke+Devrient Mobile Security GmbH, Gemalto NV, and ARM Holdings, is one of the key factors contributing to the growth. Government regulations for vehicle assistance are further expected to drive regional growth. For instance, in March 2018, the European government implemented eCall regulation, where all the new passenger cars will be equipped with eCall technology. This initiative is expected to further fuel growth.

Asia Pacific is expected to witness a CAGR of over 9.4% during the forecast period. Increasing adoption of IoT technology and the demand for embedded connectivity in vehicles from the consumers is expected to drive the market growth. According to GSMA, in 2018, the number of IoT connections in the region accounted for USD 3.5 billion and is expected to reach USD 11.0 billion by 2025. Moreover, increasing adoption of consumer electronics Solutions such as smartphones, wearables, laptops, among others, is further expected to create growth opportunities in the forthcoming years.

In Asia Pacific, the smartphone adoption rate is increasing gradually, which in turn is expected to provide avenues for market growth in the region. For instance, in 2016, India surpassed the U.S. to become the second-largest smartphone market after China. Mobile internet penetration in Asia Pacific has doubled up over the last few years. Subsequently, mobile network operators are investing heavily in order to offer internet services at a competitive price, which is likely to boost the demand for eSIM in the Asia Pacific market.

The market is consolidated and characterized by a high degree of competition among major players such as Giesecke+Devrient Mobile Security GmbH, Gemalto NV, ARM Holdings, KORE Wireless Group Inc., STMicroelectronics. These players are focusing on enhancing their market presence by adopting various strategies such as mergers, acquisitions, and joint ventures or collaborations. These strategies help organizations to expand their business geographically and enhance their solution offerings in different regions. For instance, Qualcomm Technologies, Inc. has integrated Gemalto’s eSIM technology with the Qualcomm Snapdragon mobile PC platform. This integration will offer seamless LTE and 5G connection for consumer application devices.

The industry competition is anticipated to intensify further as a number of companies are focusing on the development of advanced, cost-effective solutions and technologies. For instance, eSIM makes it easier for consumers to change their mobile operators; thus, an increase in the number of consumers switching between network providers will result in intense competition between the network operators. Moreover, the major operating players are investing in R&D in order to offer better solutions. Some of the prominent players in the eSIM market include:

Key players operating in the eSIM market are:

This report forecasts revenue growth at the global, regional, and country levels and provides an analysis of the latest industry trends from 2016 to 2027 in each of the sub-segments. For the purpose of this study, Grand View Research has segmented the global eSIM market report based on solution, application, and region:

How big is the eSIM market?

What is the eSIM market growth?

Which segment accounted for the largest eSIM market share?

b. North America dominated the eSIM market with a share of 28.9% in 2019. This is attributable to a strong presence of the network providers and rapid technological advancements.

Who are the key players in eSIM market?

What are the factors driving the eSIM market?

b. Key factors that are driving the market growth include rapid increase in the number of IoT connected devices across diverse verticals, emergence of 5G technology, and increasing number of M2M connections globally.