The global ethnic food market size was valued at USD 39.5 billion in 2021 and is expected to expand at a compound annual growth rate (CAGR) of 8.7% from 2022 to 2028. This can be credited to the rise in popularity of ethnic foods among developed nations. Consumers' growing interest in Asian cuisines globally, for example, Chinese and Japanese, is leading to the rise in demand for ethnic foods. The growing migration of Asian people to developed nations is also propelling the market growth. Furthermore, the rising millennial population which is always in search of exotic experiences is increasingly positive to adopt new ingredients and flavors in their food palate. This is also expected to propel the growth of the market for ethnic food during the coming years. Growing inclination among the millennial population towards experimenting, eating out, and eating inter-country foods on regular basis has been providing a surplus of growth opportunities for this market. 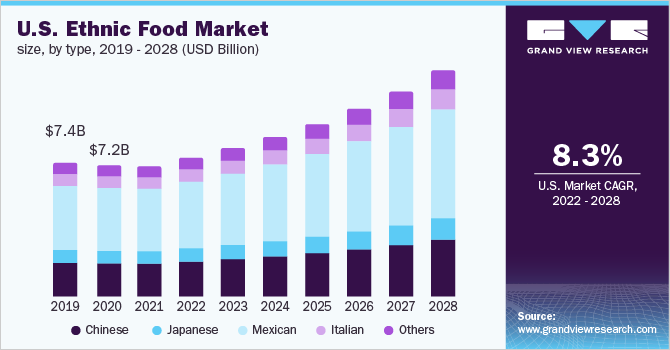 Market growth was impacted negatively due to the Covid-19 pandemic outbreak. During the peak infection period, various governments’ restricted formal gatherings, imposed lockdowns and prohibited international travel. This had impacted on the hotel and foodservice industry negatively, as many people preferred to stay inside to prevent from the infection. The lack of regular customers, and lack of tourists led to decrease in the consumption of ethnic food through major channels. This also led to quick rise in the online and home deliveries of food items and grocery products. Over the forecast period, the market for ethnic food is expected to recover fast and witness promising growth due to resumption of businesses, tourism and trade activities as well.

Furthermore, rising number of specialized ethnic food supermarket chains in developed regions is driving the market for ethnic food by increasing accessibility and availability of ethnic food items. Growing westernization in developing countries is changing the taste and food experiences of people. More people are opting for eating out and interested in trying exotic and intercontinental food dishes. The consumer’s inclination towards innovative and creative cuisines is increasing as eating good food is being termed as therapeutic. All these factors are expected to drive the market for ethnic food over the forecast period.

Market growth is mainly restrained by the stringent rules and regulations that hinders the easy and smooth trade of the food products globally. High import and export tariffs also hampering market growth in some regions. For instance, in May 2019, U.S. government announced increasing import tariffs on goods from Mexico making import tariffs 5% and duties 25%, which is expected to impact the prices and sales at restaurants. Rising digital apps and technological improvements is expected to create potential opportunities through online distribution channel across the world. The penetration of online platforms in developing nations in Asia Pacific, Middle East & Africa are expected to provide promising growth opportunity. For instance, as reported on 9th February, 2021, online grocery retailer, Grofers revenue witnessed 111% growth in financial year 2020.

By type, the Chinese segment dominated the market for ethnic food and accounted for the largest revenue share of around 40.0% in 2021. This is significantly attributed to the increasing demand for Chinese cuisine across the globe. Rising demand for Chinese cuisine from developed region such as Europe is leading to rise in market growth. The migration of Chinese students to North American and European countries has increased greatly and continues to increase. According to the Higher Education Statistics Agency, around 35% of non-European students in Europe were Chinese ethnicity in 2020 and the percentile has increased by 56% compared to 2016. This is contributing to the higher demand for Chinese cuisine in the European and North American countries. Furthermore, rising number of migrants from Asian countries owing to higher studies, tourism, and employment opportunities to other nations, leads to rise in consumption of home country cuisines which in turn is augmenting industry demand.

The Mexican segment is expected to witness lucrative growth over the forecast period. The segment is anticipated to show 2nd highest CAGR of 8.8% over the forecast period. The growth of the segment is attributed to the rising popularity and increasing consumption of Mexican ethnic food in North America, mainly by the U.S. consumers. Spiciness, hot flavor, easy to carry around, and good value for money are the factors that are credited for the increasing popularity among the consumers. Moreover, expansion to the emerging market is expected to support the growth of the segment. For instance, Mexican fast food giant, Taco Bell, is planning to open 600 outlets in India over the span of 10 years, as announced in May 2019. This is expected to increase the consumer awareness and facilitate the growth of the segment.

The Italian segment is anticipated to register lucrative growth in the market for ethnic food over the forecast period. Italian cuisine has two of the world’s most popular food items, pizza and pasta. The popularity is expected to increase further owing to the increasing penetration of food joints such as Domino’s Pizza, Inc. and Pizza Hut. Both of these giants have aggressive growth plans and are focusing on developing countries, including, India, China, etc. 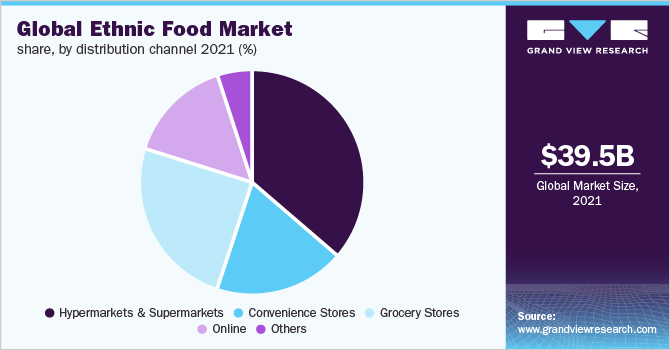 Europe dominated the market for ethnic food and accounted for revenue share of over 30.0% in 2021. This is majorly attributed to the higher presence of immigrants in the European countries, including, the U.K., Germany, and France, etc. The number is likely to increase continuously over the forecast period, owing to the tourism, employment, and higher education. Higher market share by the region is also attributed to the developed and organized retail sector and increasing online channel usage. Easy access and availability leads to the higher consumer adoption. Also rising consumption of nutritious ethnic based food owing to rising health consciousness among people in this region is augmenting growth of this market for ethnic food. Higher per capita income and higher consumer spending capacity also credited for the high regional contribution in the global market.

In Asia Pacific, the market for ethnic food is expected to witness a CAGR of 9.2% from 2022 to 2028. This can be attributed to growing demand for ethnic food among the growing millennial population. Furthermore, there has been significant growth in consumption of ethnic food cuisines in this region. Increasing food promotions via social media platforms are helping in changing consumer perception and behavior, which is resulting in consumer food palate to become wider and broader. Increasing and developing retail with expansion of supermarkets, specialty stores, and restaurant chains is also credited for the growth of the market over the forecast period. Increasing consumer spending, consumer awareness and increasing disposable income are expected to facilitate the growth of the segment.

The market for ethnic food is characterized by the presence of global key players and local small players. The market is highly fragmented. Key players are focusing on R&D and launching new products with different type of ethnic food cuisines to meet growing demand for variety of cuisines by consumers. Furthermore, key players are investing in producing healthy nutritious rich ethnic based foods owing to rising adoption of healthy lifestyle among people. Key players are increasingly launching new distribution channels, via own website or increasing presence on other e-commerce retailers. For instance, as announced in September, 2020, Orkla ASA entered into agreement with acquisition of majority of the shares in Eastern Condiments Private Limited and aims to double its market presence in India. Some of the prominent players in the ethnic food market include:

This report forecasts revenue growth at global, regional, and country levels and provides an analysis of the latest industry trends in each of the sub-segments from 2017 to 2028. For the purpose of this study, Grand View Research has segmented the global ethnic food market report on the basis of type, distribution channel, and region:

How big is the ethnic food market?

What is the ethnic food market growth?

Which region accounted for the largest ethnic food market share?

b. Europe dominated the ethnic food market with a share of 32.1% in 2021. This is attributable to higher consumer spending capacity, a large number of immigrants, and a well-established distribution network.

Who are the key players in ethnic food market?

What are the factors driving the ethnic food market?

b. Key factors that are driving the ethnic food market growth include the globalization food industry, changing consumer food palates to various cuisines, and increasing migration to developed economies.