The Europe building-integrated photovoltaics market size was estimated to be valued at USD 3.1 billion in 2019 and is anticipated to grow at a compound annual growth rate (CAGR) of 27.2% from 2020 to 2027. The demand for crystalline silicon-based Building-integrated Photovoltaics (BIPV) generated the highest revenue share on account of the high strength of the product. In addition, the demand for the product is expected to be driven by the declining product costs on account of a reduction in the price for crystalline silicon wafers. 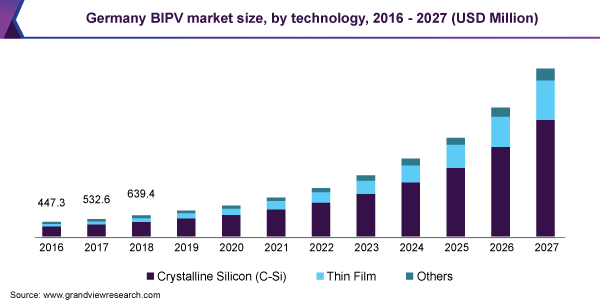 The market in Germany has emerged as one of the primary adopters of building-integrated photovoltaics on account of the positive government regulations such as the German Renewable Energy Sources Act which introduced feed-in tariffs scheme and encouraged the generation of electricity through solar.

The development of interlocking roof systems that use interlocked tiles, which provide a high conversion efficiency, coupled with a significant reduction in the weight of building integrated roofs is likely to drive the market during the forecast period.

Favorable outlook towards renewable energy coupled with consumer awareness for renewable energy in European countries is likely to drive the market for BIPV during the forecast period. The governments of Germany and Italy exhibit an increased emphasis on the use of solar energy which is expected to translate into higher adoption of building-integrated photovoltaics, thus promoting industry growth over the forecast period.

Thin-film BIPV expected to witness sustained growth over the forecast period due to rapid technological advancements leading to the introduction of advanced products. This technology is readily used in case of considerable weight constraints for the building. In such cases, the building envelope is unable to support the weight of crystalline silicon integration, leading to high demand for thin-film integrated installation.

Other technology segment includes advanced integrated photovoltaic manufacturing technologies such as dye sensitized (DSC) and organic photovoltaics (BIOPV). The demand is expected to be driven by the superior energy bandgap of organic photovoltaics. Rapid technological advancements have led to a significant increase in the efficiency of organic PVs, which is, in turn, anticipated to boost their demand over the next seven years

Based on end use, the market is segmented into industrial, commercial, and residential. In 2019, the commercial was the largest end-use segment. Residential application is projected to register the fastest CAGR during the forecast period.

The demand for residential BIPV is likely to stem from the favorable regulations passed by various authorities coupled with the high subsidies and other monetary benefits provided by the national governments. Increasing adoption of integrated solutions by residential areas in Germany and France is expected to drive the product demand over the forecast period.

The demand for building-integrated photovoltaics in industrial applications is expected to be fueled by their growing usage in a bid to reduce the reliance on non-renewable energy sources. The segment is anticipated to expand in the wake of commercial buildings in Europe. In addition, companies in developed economies in Europe exhibit an increased tendency toward the use of integrated photovoltaics in a bid to improve the aesthetic appeal of buildings.

Based on the application, the market is segmented into roof, wall, glass, façade, and others. The roof was estimated as the largest segmental market with an estimated value of USD 1.2 billion in 2019 and is projected to reach more than USD 9 billion by 2027.

Rapid technological advancements are expected to result in the production of advanced products. Incorporation of dimming, lighting, and self-cleaning modes of operation coupled with the use of monolithic integrated circuit design is also expected to bolster the demand. The use of optics to improve the performance of BIPV glass is likely to boost product demand over the next seven years. 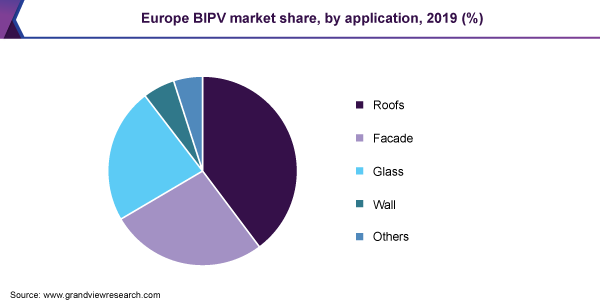 The market has witnessed increased product adoption in the recent past owing to the high aesthetic appeal of integrated photovoltaics. Increasing consumer awareness regarding the use of solar energy systems are expected to drive the demand for the BIPV facade during the forecast period.

Companies such as Onyx Solar in Italy have expanded their BIPV distribution using R2M solutions. This move is aimed at catering to the increasing product demand in the country. In addition, the high consumer affinity toward the adoption of BIPV facade solutions is likely to drive the market over the forecast period. The demand for the product in residential and commercial establishments is anticipated to register high growth owing to the increased affinity toward them coupled with their declining cost.

The market is highly fragmented with the presence of scarce multinational players. These factors make the industry highly competitive in nature, as it also requires high technology and R&D cost. The market witnesses the presence of many players involved in the production of advanced integrated products. Key players operate through patented products, which leads to notable product differentiation. Additionally, Tesla's entry into the market is expected to provide an impetus for the market growth through the introduction of advanced products coupled with a high affinity of the consumers towards the brand. Heliatek, Hanergy, Polysolar, Flisom are some of the companies that are focusing on thin-film solar technology.

Black colored solar panels have similar properties as of crystalline silicon solar cells. But, the most significant difference is that black silicon solar cells are further upgraded to have a dark black texture which tend to absorb more sunlight, ultimately leading to more energy efficiency for a solar cell. Due to these factors, the demand for black solar panels in Europe is increasing. The large-scale use of photovoltaics, especially in the built environment, increases the importance of the aesthetics of BIPV modules in Europe. In this regard, the BIPV product portfolio is diversified with products with different appearances and different functions. Examples of this are modules with colored cells, BIPV roof tiles and facade elements, which are to take over the functionality of conventional components in order to enable building-integrated PV. Completely black modules are currently widely used and are highly valued for both building-integrated and building-related applications in countries like France, Italy, and Germany. Some of the prominent players in the Europe BIPV market include:

This report forecasts revenue growth at regional and country levels and provides an analysis on the latest industry trends in each of the sub-segments from 2016 to 2027. For the purpose of this report, Grand View Research has segmented the Europe building-integrated photovoltaics market report on the basis technology, application, end use, and region:

How big is the Europe Building-integrated Photovoltaics market?

What is the Europe Building-integrated Photovoltaics market growth?

b. Crystalline silicon (C-Si) captured a market share of nearly 68.11% in 2019 due to its high conversion efficiency on commercial scale.

Who are the key players in Europe Building-integrated Photovoltaics market?

What are the factors driving the Europe Building-integrated Photovoltaics market?

b. Key factors that are driving the market growth include favorable regulations and reduction in renewable power generation costs.