The Europe immunoassay analyzers market size was valued at USD 1.6 billion in 2020 and is expected to expand at a compound annual growth rate (CAGR) of  6.0% from 2021 to 2028. Immunoassays play a vital role in disease diagnosis and treatment planning. Thus, an increase in the prevalence of chronic conditions, such as cancer, cardiovascular diseases, and diabetes mellitus and the introduction of technologically advanced automated immunoassay analyzers for its diagnosis has fueled the market growth. Since the outbreak of the novel coronavirus (COVID-19), there has been a crucial demand for diagnostic solutions, including immunoassay analyzers, as it is considered a cornerstone in the management of pandemics. 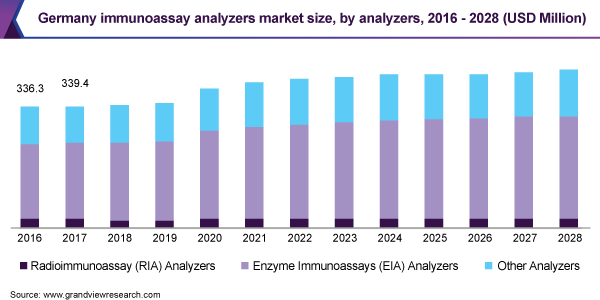 Confirmatory testing allows rapid detection of viruses and helps stop further transmission by isolating patients. European countries including France, Russia, U.K., Italy, Spain, and Germany have reported the highest number of COVID-19 cases. Mass testing has come to the fore as a potential way to confront this pandemic. Thus, in response to this pandemic, several government agencies are focused on mass COVID-19 testing and are undertaking a series of initiatives for expanding analyzers, instruments, and kit volumes to boost the testing rate in their country.

Furthermore, the high adoption of technologically advanced products, such as automated analyzers and compact portable analyzers, is expected to be one of the prominent factors contributing to the rapid growth of the market. For instance, in October 2019, LGC, a U.K.-based contract research organization, adopted Quanterix’s HD-X automated analyzer to help drug developers in bioanalytical studies and support its laboratories in Cambridge, U.K.

Moreover, the high prevalence of chronic diseases in the major European countries is further expected to create high demand for effective immunoassay analyzers, thus supporting the market growth.  According to International Diabetes Federation, in February 2020, around 15.3% of adults, accounting for 9,510,500 people, in Germany were suffering from diabetes. Also, according to data published by Commonwealth Fund in January 2019, heart disease is one of the leading causes of death in Germany, and around 38% of all deaths in the country occur due to heart disease.

In 2020, the Enzyme Immunoassay (EIA) analyzers segment dominated the market and accounted for the largest revenue share of 63.9%. The segment is anticipated to witness the fastest CAGR during the forecast period.EIA analyzers have been the most extensively applied immunodiagnostic system in bioanalytical, industrial, and healthcare settings. It utilizes the reactivity of enzyme assays and the specificity of an antibody to identify and measure molecules such as antibodies, peptides, proteins, and hormones.

Some of the major advantages of EIA analyzes are its high sensitivity, efficiency, and specificity without the need for radioactive substances, as the test is based on the antigen-antibody response. The ability to perform analysis simultaneously without a complex sample pretreatment is another factor facilitating its uptake across various applications. In addition, growing R&D activities in the areas of EIA testing and equipment shall offer abundant opportunities for market expansion.

In 2020, the hospitals segment dominated the market and accounted for the largest revenue share of 33.1%. The segment is anticipated to maintain its dominance over the forecast period. The large share can be attributed to the high demand for immunoassay products in hospitals with increased hospitalizations due to chronic and infectious diseases. The increasing number of corporate hospital chains further boosts market demand for automated immunoassay analyzers. 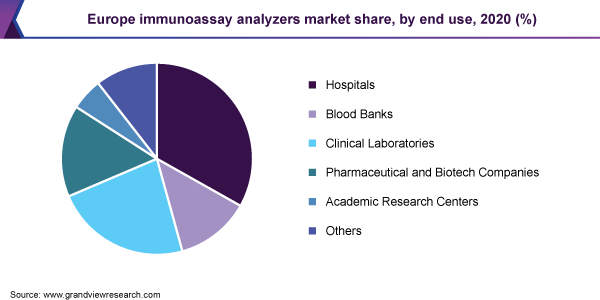 Germany dominated the market and accounted for the largest revenue share of 23.7%in 2020 and is expected to maintain its position during the forecast period. In Germany, the market is expected to witness substantial growth owing to its supportive healthcare policies. Moreover, the presence of a large geriatric population in this country is a major driver for the market. According to UN population data, one in every 20 people in Germany is above 80 years, and the number is expected to increase to six by 2050. With age, the risk of developing chronic diseases, such as cardiovascular diseases, diabetes, and neurovascular disorders, increases due to the onset of senescence and decreased immunity levels.

In the U.K., the market is expected to grow fast over the forecast period owing to the presence of sophisticated healthcare infrastructure, high disposable income, increasing healthcare expenditure, and growing awareness about the early diagnosis of diseases. As per the data published by the Office for National Statistics, the U.K. spent around USD 286.3 billion (GBP 214.4) with a per capita expenditure of USD 4,309.4 (GBP 3,227) on healthcare in 2018. This was equivalent to approximately 10.0% of GDP, which was high in comparison to 9.8% in 2017. The government-financed 78.0% of total healthcare expenses, which accounted for USD 222.6 billion (GBP 166.7 billion). Furthermore, the demand for immunoassay analyzers market is growing primarily due to the high demand for diagnostics, which can be attributed to increasing in the prevalence of chronic diseases.

Key players are undertaking extensive strategic initiatives in the field of immunoassay analyzers, including mergers and acquisitions, new product development, and regional expansion, to address the unmet needs of patients. Some of the prominent players in the Europe immunoassay analyzers market include:

This report forecasts revenue growth at regional and country levels and provides an analysis of the latest industry trends in each of the sub-segments from 2016 to 2028. For the purpose of this study, Grand View Research has segmented the Europe immunoassay analyzers market report on the basis of analyzers, end use, and region:

How big is the Europe immunoassay analyzers market?

What is the Europe immunoassay analyzers market growth?

b. In 2020, the Enzyme Immunoassay (EIA) analyzers segment dominated the Europe immunoassay analyzers market and accounted for the largest revenue share of 63.9%.

Who are the key players in Europe immunoassay analyzers market?

What are the factors driving the Europe immunoassay analyzers market?

b. In 2020, the hospital segment dominated the Europe immunoassay analyzers market and accounted for the largest revenue share of 33.1%.

b. Germany dominated the Europe immunoassay analyzers market and accounted for the largest revenue share of 23.7%in 2020 and is expected to maintain its position during the forecast period.