The Europe LED lighting market size was valued at USD 4,703.1 million in 2018, registering a CAGR of 16.0% from 2019 to 2025. The rise in the number of stringent government regulations such as the ban of less-efficient lighting sources and incentives & rebates on LED lighting is expected to drive the market significantly over the forecast period. The region also has several standards that govern the safety and performance of indoor commercial lighting as well as garage illumination, roadway lighting, and parking lighting. Moreover, increasing awareness about energy conservation is further driving the market growth. 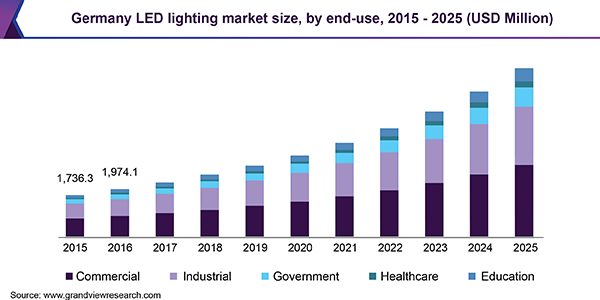 The European commercial & industrial sector is flourishing owing to the growth of the regional automotive and IT industries. The region has also fully recovered from the 2008 financial crisis and most industries affected by it have been recording steady growth over the years. The region witnessed the lowest office vacancy rates in 2018 since the said financial crisis. Favorable business conditions and growing individual economies are expected to improve the demand for LED lighting in the region over the forecast period.

Similarly, the construction industry has observed notable growth from the commercial & industrial sectors in the past few years, as the need for commercial spaces is on the rise. To benefit from this trend, electricity supply companies have collaborated with the government to distribute subsidized LED lights to the commercial sector. As LED lighting considerably brings down electricity and maintenance costs as compared to traditional technologies such as gas-discharge lights, incandescent lights, and compact fluorescent lights, such collaborations are expected to further encourage the adoption of LED lighting solutions in the enterprise sector.

LED lights offer a greener, sustainable, and viable alternative to their traditional counterparts owing to their high energy efficiency and longer lifespan. LED lights also score very low in terms of any hazardous chemicals associated with them, which significantly reduces the probability of a ban or phase-out. While LED lighting solutions can be integrated or embedded with lighting controllers, they are also recyclable.

European LED manufacturers are benefitting from the stringent regulations levied on the import of lighting products. The American market has emerged as one of the prominent consumers of European lightings, with growing trade tensions between the U.S. and China positively benefitting European companies. The trend is likely to continue to benefit the European LED lighting market.

Based on the design type, the European market for LED lighting has been segregated into lamps and luminaires. While the lamp segment accounted for the largest share in 2018, the luminaire segment is expected to register the highest CAGR over the forecast period. The rising demand for A-type and T-type lamps in residential and commercial sectors is expected to help the lamps segment acquire a significant share of the market throughout the forecast period. The rising demand for advanced lamps such as MR-16 lamps and reflector lamps, especially in retail applications such as small stores, retail shops, and malls, is also expected to help the segment retain dominance. 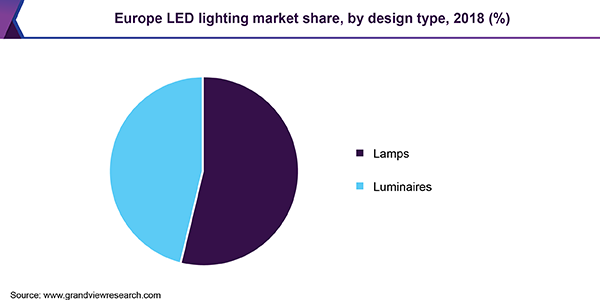 The adoption of advanced LED luminaires such as downlights and troffers is rising in the commercial sector. Moreover, many European countries are replacing conventional halogen lamp street lights with LED lights as a part of the European Union’s green initiative, which is likely to further drive the segment growth. The rising popularity of designer luminaires for architectural applications in western European countries, as the construction of modern and sustainable homes grows in the region, is also likely to drive the segment growth.

Based on end-use, the European market for LED lighting has been segregated into commercial, industrial, government, healthcare, and education. The commercial segment accounted for the largest share of more than 42% in 2018 and is expected to continue to dominate over the forecast period. The penetration of LED lights in the Industrial segment is also increasing as LEDs offer brighter and efficient lighting at a much lower operating cost.

Healthcare and education segments have vast untapped growth opportunities for the market. The government sector is exhibiting growth at a fast pace owing to the active participation of governments in promoting the adoption of LED lighting through various schemes, regulations, and rebate programs. The construction segment is also expected to present strong growth opportunities over the forecast period. Several local government authorities and municipalities across the world are testing LED street lighting for energy efficiency and have initiated measures aimed at replacing HPS (High-pressure Sodium) lamps with LED lighting solutions. Parking garages and parking spaces lights, metal halide lights, fluorescent lights, and HPS are expected to be the primary targets for replacements with LEDs.

The European market for LED lighting has been segmented into four prominent regions, namely East Europe, West Europe, North Europe, and South Europe. The West Europe segment dominated the market in 2018, as Germany is a leading LED manufacturer in Europe and accounts for a significant share in the region’s LED exports. The presence of prominent players such as OSRAM GmbH and Signify Holdings and the availability of technologically advanced manufacturing facilities are favoring the growth prospects of the regional LED lighting market.

The North and South European markets are growing at a faster rate as countries in these regions are attracting foreign investment and witnessing positive economic growth. Moreover, the governments' incentives & rebate programs are being deployed on a larger scale. The South European regional market is likely to expand at the fastest pace over the forecast period, registering a CAGR above 17%.

Prominent participants in the market include Signify Holdings, Acuity Brands Lighting Inc., OSRAM GmbH, Eaton, and LEDVANCE GmbH. Market leaders are focusing on expanding their capabilities and entering into new application areas such as horticultural lighting and UV lighting for gaining greater market share. New entrants are focusing on disrupting the industry with technologically advanced lighting solutions such as Li-Fi and sensor-based lightings. Mergers and acquisitions are actively practiced in the lighting industry to expand product portfolio, geographical reach, and gain market share.

This report forecasts revenue growth at regional & country levels and provides an analysis of the latest industry trends in each of the sub-segments from 2015 to 2025. For this study, Grand View Research has segmented the Europe LED lighting market report based on design type, end-use, and region:

How big is the europe led lighting market?

What is the europe led lighting market growth?

b. West Europe dominated the europe led lighting market with a share of 67.5% in 2019. This is attributable to the presence of prominent players such as OSRAM GmbH and Signify Holdings and the availability of technologically advanced manufacturing facilities.

Who are the key players in europe led lighting market?

What are the factors driving the europe led lighting market?

b. Key factors that are driving the market growth include the rise in the number of stringent government regulations and increasing awareness about energy conservation.