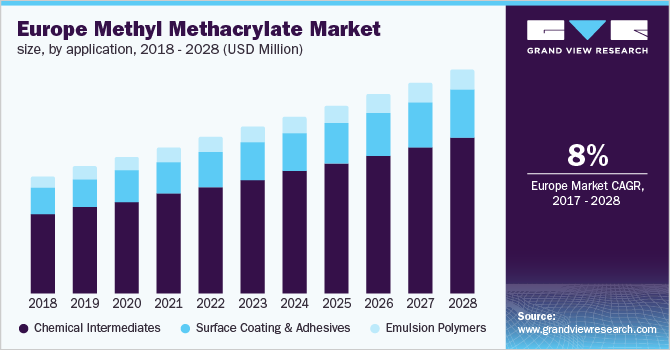 The market is anticipated to witness significant growth over the forecast period on account of increasing demand for polymethyl methacrylate (PMMA) in end-use sectors such as construction, automotive, electronics, and medical. The use of MMA in the construction sector is driven by the recovery of the building and construction market in Europe.

Global rise in demand for automobiles, improved vehicle design capabilities, and increasing importance of lightweight and emission control vehicles are major factors driving demand for MMA in the automotive industry.

Majority of MMA that is produced globally is polymerized to produce homo and copolymers, with extrusion of various polyacrylates being the largest application. PMMA is the most commonly used polyacrylate. Increasing use of PMMA, which uses MMA as a raw material, in end-use industries is propelling market growth.

Rise in PMMA prices has triggered customers in automotive and medical sectors to use cheaper plastics, such as polycarbonate and polyethylene terephthalate glycol (PETG), as a substitute to PMMA.

MMA monomers are used in the production of paints and coatings. They are also used to produce durable coatings that are weather-resistant and durable. Methacrylic monomers have low volatile organic compound (VOC) content, which makes them suitable for use in road marking and marine coating applications.

The Europe methyl methacrylate (MMA) market is segmented on the basis of end use into construction, automotive, electronics, and others. MMA is used as a monomer for copolymerization and production of various PMMA cast and extruded sheets. The derived PMMA extruded sheets are used in window panels and domes in the building and construction industry owing to several features such as high transparency, UV resistance, and surface hardness. A wide array of nanoporous polymeric materials such as PMMA and polystyrene are preferred in manufacturing of vacuum insulation panels. Growth in use of PMMA in various construction end uses is propelling the demand for MMA. 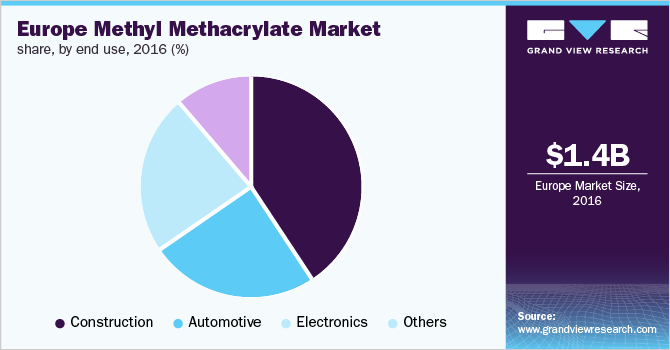 Polymer electrolytes blended with PMMA and poly (vinylidene fluoride-co-hexafluoropropylene) exhibit improved thermal stability and ionic conductivity compared to conventional polymer electrolytes used in lithium-ion batteries in electric vehicles. Emerging Asian economies such as India, Singapore, and Thailand are rapidly becoming manufacturing hubs for electric vehicles for European companies. Rapid growth in manufacturing of electric vehicles is expected to accelerate the use of PMMA, which, in turn, is anticipated to drive demand.

Revitalized automotive market, increasing consumer disposable income, and rise in construction and infrastructural spending in the European Union member states are some of the factors likely to trigger market growth. Increased spending in the building and construction industry, which was the largest segment in terms of revenue in 2016, mainly drives demand for MMA. The presence of EU’s energy-efficiency initiatives, such as Horizon 2020, to achieve energy efficiency in residential and commercial spaces is the main driver triggering product demand.

Competitive rivalry among producers is high owing to the presence of key players in the market. This is supported by the fact that some of the leading players, such as Mitsubishi Chemical Corporation (MCC), Sumitomo Chemicals Co., Ltd., and Evonik Industries AG, announced their expansion strategies and established joint ventures with various prominent stakeholders in the Middle East and European regions.

Sumitomo Chemicals Co., Ltd. and Mitsubishi Chemical Corporation have made long-term strategic collaborations with Saudi Arabia-based chemical manufacturing companies Saudi Aramco and SABIC for commissioning new MMA plants to increase their production capacities. Such strategic partnerships have given Sumitomo Chemicals Co., Ltd. and Mitsubishi Chemical Corporation a fair advantage over other dominant competitors in the market. Rise in demand in Europe has provided opportunities to producers in the Middle East and Asia to cater to this surge. This has led to severe price pressure on European producers.

This report forecasts volume and revenue growth at country levels and provides an analysis on the latest industry trends in each of the sub-segments from 2014 to 2028. For the purpose of this study, Grand View Research has segmented the Europe methyl methacrylate (MMA) market on the basis of application, end use, and region:

How big is the europe methyl methacrylate market?

What is the europe methyl methacrylate market growth?

Who are the key players in europe methyl methacrylate market?

What are the factors driving the europe methyl methacrylate market?

b. Key factors that are driving the market growth include increasing MMA demand for lightweight polymer production and Exepanding electronics and building & construction industries.