The global paints and coatings market size was estimated at 43.40 million tons in 2016 and is expected to grow significantly over the forecast period owing to its growing utilization in various end-use industries such as automotive, marine, construction, and industrial to be the major ones.

The global market in the past few years has grown moderately despite various uncertainties such as the economic slowdown of major economies, negative & positive influence of the low crude oil price, fluctuations in the value of U.S. dollars, the high growth rate of the U.S. automotive and construction industry, the tenuousness of the recovery of various European nations and developments in regulatory norms globally. 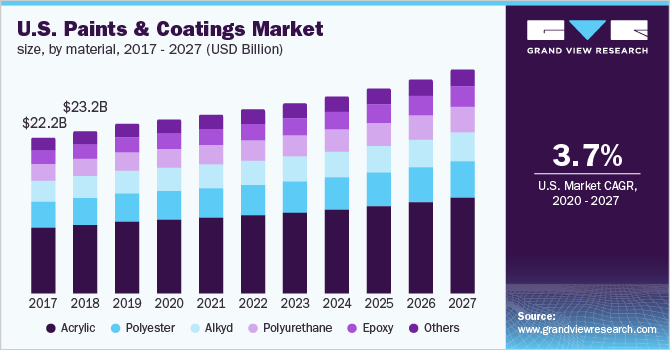 Despite the fact that many of these factors are beyond the control of coats & glaze formulators, manufacturers, raw material and end product distributors and marketers, the industry has rapidly responded exceptionally to these crucial changes in market conditions. This has been possible owing to the introduction of various innovative manufacturing processes and technologies that helped the industry players to instantly mitigate to numerous potential negative impacts and maximized their opportunities for carrying growth to the decorates & glaze products.

From the past decade, innovative formulation technologies have significantly facilitated to cater to numerous new and diverse consumer demands. Anticorrosive protection, low-VOC content coats, and nanocoatings are few of the newly developed concepts available in the present market.

The introduction of nanotechnology has played a significant role in the industry. Apart from developing zero or low VOC content formulations, industry players have taken numerous advantages of this technology to develop nano paints and coatings, with characteristics of extremely high in nature. This includes the introduction of ceramic or metals in various types of formulations. The integration carried out can be in the form of granules, free powder, or particles which are then inserted in the finished product matrix.

Some of the recent innovations that nanotechnology has enabled the formulators to develop include products that can conduct electricity, or exhibit UV protective or self-healing properties. Apart from these, they are also highly resistant to scratch, mar wear, and corrosion. Hence, these advancements in technology and the introduction of new products are expected to augment future growth across the paints and coatings industry over the forecast period.

The influence of the green movement is yet another recent trend in the present scenario. The industry players have been seen investing substantially in research and development initiatives to offer customers highly substantial products and also to save energy with the introduction of new processes. Another new latest trend in product catalogs within the industry participants is the multifunctional coats such as the temperature-sensitive or thermal coatings capable of reducing the transfer of heat in industrial processes. Hence, these factors are anticipated to create lucrative prospects for industry expansion across every end-use sector.

Waterborne formulations were the largest product segment which generated revenue worth of over USD 49.70 billion in 2016. The water-based coats segment is expected to witness substantial growth over the forecast period owing to increasing demand from several application sectors including construction, furniture, and automobile industries.

The water-based polyurethane formulations are estimated to emerge as the fastest-growing type of water-based resins. Owing to increased construction spending and consumer preference especially in emerging economies of Asia Pacific towards eco-friendly products. The high usage of these formulations is due to the solvent-like properties of water with no harmful effects as that of synthetic counterparts.

Solvent-based formulations are the most convenient ones for manufacturing the finished compositions. Aliphatic hydrocarbons, lacquer thinner, toluene, and xylene are some of the most commonly used solvents in the industry. The global solvent-based product market has undergone a paradigm shift due to adverse effects on the environment because of volatile organic compounds in petrochemical solvents.

The demand for solvent-based coats has changed majorly in the mature economies particularly in Europe and North America due to stringent environmental norms and acts for hazardous chemicals. China is the leading consumer of solvent-borne paints due to increased usage in industrial/commercial construction and automotive sectors. Companies are now shifting their consumption from traditional paints to the green composition at a relatively higher cost.

The acrylic segment was the largest material segment, which was valued over USD 60.50 billion in 2016 and is expected to grow substantially over the forecast period owing to its excellent stabilization and weathering properties. Acrylic resins are widely used in water reducible and emulsion resins for the manufacturing of coats and varnishes. Its characteristics include optical clarity, weather/UV resistance, and excellent dimensional stability. The thermoplastic nature of acrylic is an advantage over epoxy and polyester. 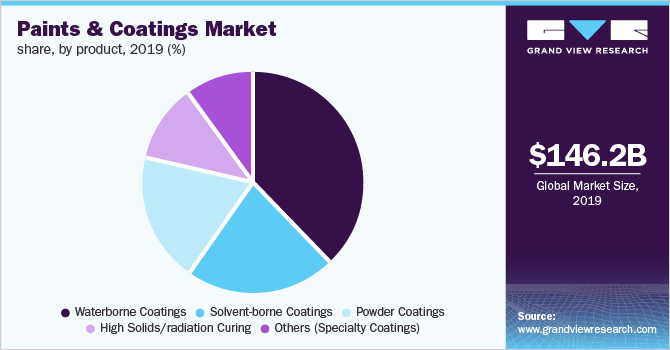 Also, acrylic resins are used more in wet coats, which have higher VOC levels as compared to powder-based coatings. Currently, owing to the development of advanced technologies, the business has witnessed a huge shift from solvent-based to water-based or powder coats.

Implementation of stringent regulations globally and tremendously growing awareness for VOC content among end-users is expected to be the major factor driving demand for water-based products which in turn is anticipated to drive the demand for acrylic resins.

Polyurethane was the fastest-growing raw material segment owing to its excellent properties of long-term resistance to corrosion and retaining gloss.

The architectural and decorative coats segment is the largest application segment in 2016. The global architectural coatings demand is anticipated to grow at a CAGR of over 4.5% over the forecast period.

The Asia Pacific was the largest regional market in 2016 while generated total revenue of over 16.20 million tons in the same year. The region is also projected to be the fastest-growing market over the forecast period. Rapidly expanding automobile and construction industries in the region is expected to be the major factors driving demand for these products over the forecast period.

Emerging economies of the region such as India, Vietnam, and Taiwan are expected to witness the entry of a large number of dye manufacturers in the near future thus further adding to the production capacity of the region. The growing electronic industry in China, Thailand, and India has also driven the industry in the Asia Pacific region.

Increasing disposable income and purchasing power in the region are some of the other crucial indicators for increasing demand for coats and varnishes. However, existing mature economies such as Australia, Japan, Korea, and mainly China is expected to be the major contributors to drive demand for varnishes & coats in the region.

Demand in the North American region was estimated to be around 11.10 million tons in 2016 and is expected to grow with a CAGR of over 3% from 2017 to 2025. Concerns regarding the release of volatile organic materials and the presence of perilous chemicals among the consumers in the region have led to the implementation of stringent regulatory frameworks in the past few years. The presence of stringent regulatory agenda is anticipated to be a major factor restricting the industry growth in North America.

The acquisition of BASF’s industrial coats by AkzoNobel in December 2016 was one of the major initiatives in the industry. In January 2016, BASF launched an organic pacifying polymer-based varnish that reduces emissions of titanium oxide without compensating the performance of the product.

This report forecasts revenue growth at country levels and provides an analysis of the industry trends in each of the sub-segments from 2014 to 2025. For the purpose of this report, Grand View Research has segmented the global paints and coatings market on the basis of product, material, application, and region: