The global eye tracking market size was valued at USD 285.6 million in 2017. It is projected to register a CAGR of 26.3% during the forecast period. Increasing use of smart sensors for process control and decision making and rising demand for contactless biometrics are among the key trends stoking market growth. Growing adoption of artificial intelligence (AI), virtual reality (VR), and augmented reality (AR) in consumer electronics & other commercial application areas is poised to help the market gain tremendous momentum over the coming years. 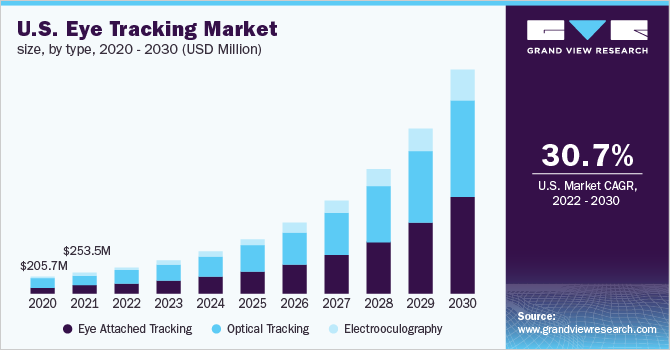 The industry has experienced a sharp growth in recent times as a result of increased adoption of vision capturing technology in commercial spaces, particularly in industries and sectors. These industries include retail, healthcare, research, automotive, consumer electronics, government & defense, and security & surveillance.

The optical tracking system, also known as video-based eye tracker, happens to be the most popular type of vision capturing system among users. It leverages trackers to continuously record the sight movement and position of the individual being tracked.

Surging demand for contactless biometrics is anticipated to play a pivotal role in the development of the market. Biometric systems are largely used for security purposes in prison management systems as well as by the defense sector. Defense organizations and police departments deploy iris biometric scanners for identifying individuals in order to tighten their security arrangements.

However, vision capturing is a relatively new technology and will take time to proliferate. Hence, there are only a few established players offering integrated vision capturing solutions. These players are focusing on partnerships, mergers & acquisitions, and expanding their R&D activities.

In January 2017, EyeTech Digital Systems, Inc. partnered with Quantum Rehab to introduce vision-controlled wheelchairs, which would be useful for individuals who are unable to use the hand control system. The vision tracker technology is mounted directly onto tablet or desktop that is further integrated within the wheelchair in order to allow users to control the wheelchair using vision movements.

Eye-attached capturing devices are similar to contact lenses embedded with magnetic or mirror sensors, which can keep tracing the vision irrespective of the head movement. It can track vision movement in vertical, torsion, and horizontal directions. An eye attached vision capturing system would be particularly ideal for the healthcare, research, retail, and consumer electronics sectors, as vision capturing remains uninterrupted even if the user moves his head slightly or sets in motion.

Electrooculography technique, on the other hand, can detect and track vision movement through electric signals obtained from contact electrodes placed on the skin around the eyes. The technique allows users to track vision in darkness or even when the eyes are closed. The technique is particularly useful in researching human behavior during sleep. However, the sight gaze detection capability of an EOG system is not as accurate as an optical tracing system, which uses infrared technology to detect gazing.

By component, the market has been bifurcated into hardware and software. Hardware and software components of vision capturing systems vary according to the properties of the tracker. In case of eye-attached tracking, hardware components include a head-mount vision capturing system with cameras and sensors, an eye-tracking glass or lenses, and an external or internal storage device for recording and storing the data captured by vision trackers. The software, on the other hand, is integrated within a remote desktop that receives data from the head-mounted system.

In case of optical capturing or video-based trackers, hardware components are similar to that of the eye attached tracing system. They comprise the eye tracking device (ETD), including a desktop, an external or internal storage device, a camera for recording vision movement and gaze point, and optical sensors for detecting and tracing vision movement. However, software is integrated within ETD for processing and analyzing data captured by cameras and sensors.

After data filtration and processing, results derived from analytical tools are used for various purposes. For instance, in medical research, the analyzed data is used to study a myriad of psychiatric and neurological conditions, such as autism spectrum disorder (ASD), attention deficit hyperactivity disorder (ADHD), obsessive-compulsive disorder (OCD), Parkinson‘s, Alzheimer‘s, and Schizophrenia, among others. In the automotive sector, the analyzed data is used for enhancing human-machine interface (HMI) systems as well as for other purposes, such as alerting drivers for being inattentive while driving.

By application, the eye-tracking market has been divided into healthcare, retail, research, automotive, consumer electronics, and others. The others segment includes the use of vision tracing systems by governments and the defense sector. Healthcare was the dominant segment in 2017 and is estimated to command a revenue share of just over 24.0% by 2025. Initial adoption of gaze capturing in healthcare was limited to a computer interface for patients suffering from mobility disabilities and other communication issues. However, technology is being increasingly adopted as an input mechanism in consumer electronics and gaming devices.

The consumer electronics segment is expected to expand at a CAGR exceeding 28.0% over the forecast period. Furthermore, the segment is anticipated to witness the fastest growth in the Asia Pacific region, with Japan, China, and India being at the forefront. Game designers leverage the vision gaze technology to enhance the user interface (UI) design and provide smarter modes of UI modalities and gameplay interaction that are sensitive to the user’s mood and behavior. 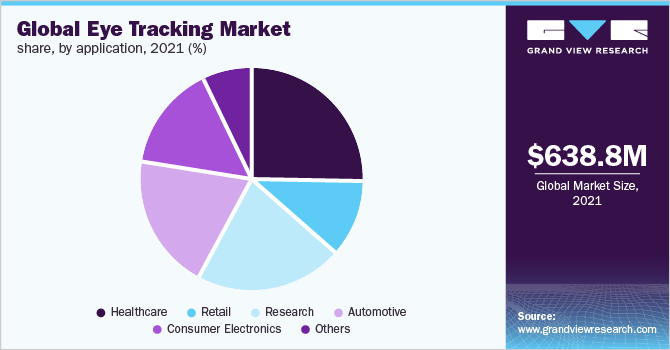 In the automotive industry, ETDs are used to alert the driver for being inattentive while driving in order to prevent road accidents. In the healthcare sector, eye tracking systems are being used by surgeons as hands-free controls to communicate using sight movement through the HMI platform.

Based on location, the market has been classified into remote and mobile tracking systems. In case of remote/screen-based vision tracking, respondents have to be in front of eye tracking device in a stationary position. However, mobile vision trackers are head-mounted to respondents for capturing vision movement continuously, irrespective of respondents moving their heads or being in motion.

The remote segment accounted for a larger revenue share in 2017 and is poised to continue dominating the market over the forecast period. Mobile tracking system, on the other hand, is estimated to rise at a CAGR of over 28.0% during the forecast period, particularly due to growing adoption of vision tracing technology in commercial applications.

The North America region dominated the market with a revenue share of just over 48.0% in 2017. It is expected to retain its dominance over the forecast period. The U.S. is the leading revenue contributor in the region owing to aggressive adoption of smart sensors and contactless biometric systems. A majority of prominent industry players are based in the U.S., Germany, Japan, and China; and most of the developments are happening in these regions.

In June 2017, Apple, Inc. acquired SensoMotoric Instruments, a company based in Germany specializing in augmented reality (AR) and eye-tracking. Through such acquisitions, Apple, Inc. anticipates developing AR and VR platforms, such as ARKit, an AR framework that blends digital information and objects with environment around user and integrates those into iOS 11.

Asia Pacific is likely to witness the highest CAGR of over 30.0% during the forecast period. Increasing adoption of vision tracing, particularly in consumer electronics, is projected to trigger the growth in the regional market.

Key players in the market include Tobii AB, Seeing Machines Limited, Smart Eye AB, and SR Research Ltd. Most of these market players are adhering to mergers & acquisitions in order to address the challenges associated with in-house research & development and to enhance their product portfolios. For instance, in May 2017, Tobii Pro, the research wing of Tobii AB, acquired Sticky, a company offering a cloud-based solution that enables large-scale market research studies using webcam vision capturing. Tobii Pro is one of the most prominent players in vision tracking research solutions and the acquisition has brought Sticky’s complementing cloud-based platform under its product portfolio.

Major software companies are also striking strategic alliances with vision tracing system developers in order to integrate the technology into their own products. For instance, in August 2017, Microsoft Corporation and Tobii AB entered into a partnership and jointly released a product called ‘Eye Control’, a featured in-box experience leveraging vision gaze supported by Windows 10.

This report forecasts revenue growths at global, regional, and country levels and provides an analysis of the industry trends in each of the sub-segments from 2014 to 2025. For the purpose of this study, Grand View Research has segmented the global eye tracking market report based on type, component, location, application, and region.