The global fast curing NBR market size was estimated at 415.9 kilotons in 2016. Rising importance of high-temperature molding during polymer processing for the manufacturing of goods for automotive, construction, and oil & gas industries is expected to drive the market.

Fast curing NBR is one of the most valuable polymers, processed from using hot polymerization processes. The product has exceptional properties that include excellent oil resistance, good sealing retention along with providing short curing time intervals and reducing mold fouling in shop floors.

The European Commission provided a budgeting of USD 74.3 billion for 2014-2020, with the aim of R&D for the production of naturally derived polymers including bioplastics. This policy is expected to force rubber manufacturers to procure raw materials derived from soy and sugarcane for the production of finished goods.

NBR manufacturers are likely to increase spending towards the development of bio-based butadiene for the manufacturing NBR over the next eight years. In December 2015, the government of India announced the reframing of Draft National Chemical Policy with the aim of the plan for integrating the refineries to polymer processing facilities.

Seals & O-rings dominated the market, accounting for 19.4% of global fast curing NBR market share in 2016. Fast cured seals are expected to find applications in hydraulic engines where oil resistance is one of the major concerns among buyers in the automotive, construction, and manufacturing sectors.

Rising use of lightweight conveyor belts in the power, mining, and manufacturing sectors on account of improving process automation practices on a global level is expected to remain a key driving factor over the next eight years. Furthermore, increasing importance of polymer-based conveyor belts in food contact applications owing to the implementation of stringent regulations to prevent chemical contamination to finished product is expected to promote the open new markets for fast curing NBR products.

Molded & extruded products are expected to account for 17.1% of the global fast curing NBR industry by the end of 2025. Rising spending on high-temperature injection molding for the production of goods related to automotive and construction industries on account of application growth in emerging markets including China and India is expected to promote the usage of fast curing NBR over the projected period.

The automotive industry dominated the market in terms of market share, accounting for 35.9% of the global fast curing NBR market in 2016. The global light vehicle production is anticipated to exceed 100 million units by 2021 from 85 million units in 2013. The implementation of regulations by the European Commission and EPA for ensuring safety and comfort to drivers is expected to result in increasing usage of lightweight polymer materials including vibration dampeners and gaskets 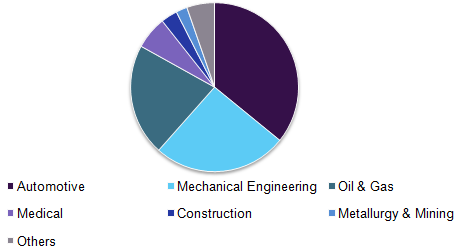 Fast curing NBR is widely used in a range of equipment as sealing valves, rubber seals, and precision diaphragms on account of providing excellent sealing force retention. Rising concerns over seal leakages in hydraulic systems due to extreme operating pressure and high lead times are expected to force OEMs to use fast cured product forms as an excellent sealing protective agent.

Rapid industrialization in emerging economies including China, India, and Mexico is expected to result in increasing the construction spending on a domestic level. These factors will contribute significantly to the increasing demand for the product in the form of seals, extruded, and molded products for home interiors and commercial spaces.

Asia Pacific was the largest market, accounting for 56.1% of global fast curing NBR market volume in 2016. The firm foothold of automotive manufacturing companies in China and India in light of vast customer base coupled with low production cost is expected to remain a key favorable factor for the market.

Government initiatives for infrastructural development in China and India are foreseen to promote the application growth in building and bridge construction. In May 2015, the government of India announced an investment of USD 946 million for constructing 100 smart cities which are expected to augment the demand for fast curing NBR in sealants in the near future.

North America is expected to account for 20.8% of the total share by the end of 2025. The emergence of Mexico as a manufacturing hub of the automotive industry coupled with gains in the construction sector of the U.S. is expected to promote the usage of fast curing NBR as sealing materials over the projected period.

In October 2016, Petrobras and Statoil ASA formed a partnership to enhance the production of crude oil from aging wells in offshore Campos Basin, Brazil. This partnership is expected to open new markets for hydraulic engines in appraisal drilling of well to enhance the productivity which is likely to upscale the requirements of seals and hose pipes derived from fast curing NBR.

MEA is expected to foresee revenue growth at a CAGR of 2.1% from 2017 to 2025. In 2013, the government of Saudi Arabia announced the “National Industrial Development Cluster Program” which focuses on setting up new vehicle manufacturing units. This program is expected to increase the use of fast cured nitrile polymers in sealing materials.

The rise in the demand for fast curing NBR products in the form of hose, belts, and rubber compounds in automotive, oil & gas, and personal protective equipment applications is expected to fuel market growth. Emerging regional players or new entrants especially in developing countries are estimated to gain opportunities to enter the market.

An increasing number of government initiatives coupled with foreign investment in the developing automotive sectors mainly in China, India, and Mexico is further expected to open new markets for fast curing NBR.

This report forecasts revenue growth at global, regional & country levels and provides an analysis on the industry trends in each of the sub-segments from 2014 to 2025. For the purpose of this study, Grand View Research has segmented the fast curing NBR market on the basis of product, application, and region: