The global ferrochrome market size was valued at USD 16.77 billion in 2018 and is predicted to grow at a CAGR of 4.6% from 2019 to 2030. Increasing stainless steel production around the globe is a significant factor driving the market growth.

Ferrochrome (FeCr) is added to stainless steel to enhance its appearance and impart corrosion resistance. The minimum FeCr content in stainless steel is 10%, while the average content is 18%. The dynamics of the stainless steel industry play a crucial role in influencing FeCr supply and demand, as it accounts for majority of ferrochrome consumption. 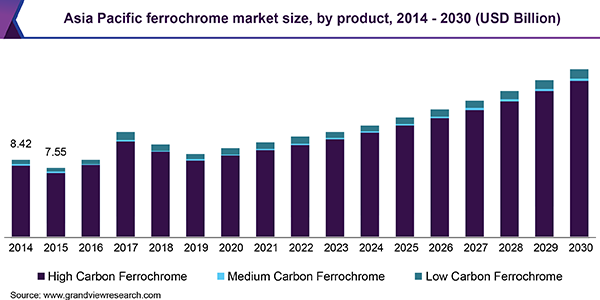 Growing manufacturing activities and increasing foreign investments are some of the major factors driving stainless steel market in the region. Foreign investments help to boost the growth of manufacturing sectors such as construction, heavy machinery, consumer goods, and automotive. As per the United Nations Conference on Trade and Development, the inward foreign direct investment (FDI) rate for Asia was 9.1% in 2017, the highest of all regions.

ASEAN-5, which comprises Indonesia, Malaysia, the Philippines, Vietnam, and Thailand, is also likely to contribute to the demand for ferrochrome over the coming years. Amid the global slowdown stated by the International Monetary Fund (IMF) in 2019, ASEAN-5 countries are likely to maintain a steady growth of 5.1% in 2019 as per IMF. In addition, these countries are attracting significant foreign investments in various end-use industries such as automotive and construction, where the demand for stainless steel is significantly high.

The FeCr production is a highly electrical energy intensive process. Estimated power consumption of 4,500 .kWh and 2.5 tons of chromite ore is required to manufacture one ton of the product. The current method of production, which is used globally, involves carbothermic smelting reduction of chromite in submerged electric arc furnaces (SAF).

High carbon ferrochrome (HC FeCr) dominated the market with a volume share of 85.7% in 2018.  The significant factor contributing to the dominance of HC FeCr is its lower cost and availability of larger reserves as compared to other products. As a result, this product is largely consumed by stainless steel manufacturers.

Low carbon ferrochrome (LC FeCr) is predicted to witness a CAGR of 3.5%, from 2019 to 2030, in terms of revenue. Although LC FeCr is also used in stainless steel, the major applications of the product are carbon & low alloy, and tool steels. Steel producers typically use low carbon ferrochrome in the last stages of production to add the precise quantity of chrome without affecting the carbon levels.

Stainless steel accounted for the largest consumption of the product with a volume share of 80.4% in 2018. FeCr is mainly added to reduce oxidation and improve its aesthetic appearance. As of 2018, there was no substitute for ferrochrome for the aforementioned purposes in stainless steel application. As a result, the demand for products is expected to remain strong over the coming years. 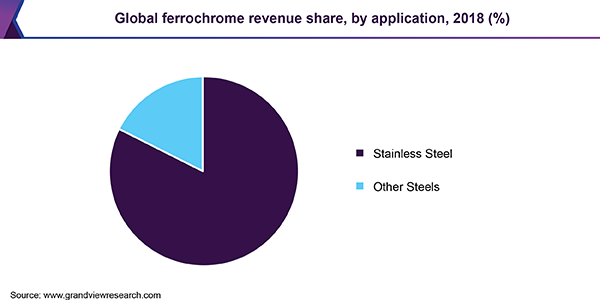 Ferrochrome is also added to carbon & low alloy, engineering, tool, and high strength steels. The consumption of FeCr in the aforementioned products is expected to witness a CAGR of 3.2%, from 2019 to 2030, in terms of revenue. The product is added to impart an additional hardness, wear resistance, and toughness. Alloy steels are mainly used in building & construction industry.

Europe is predicted to witness a CAGR of 4.3% from 2019 to 2030, in terms of revenue. Europe is characterized by the presence of a large number of automakers and auto component manufacturers in Germany and massive aerospace manufacturing sector in France. As a result, there is considerable domestic production of stainless steel as a variety of auto components are manufactured by stainless steel. Moreover, the recent trend indicates protectionist policies implemented by the government to boost domestic steel production. This is a positive factor for FeCr market as it will likely result in increasing demand for the product.

In North America, the U.S. is a considerably larger market for ferrochrome when compared to Canada and Mexico. The declining imports of stainless steel owing to the ongoing U.S.-China trade war are expected to enhance stainless steel production in the U.S. However, rising prices of stainless steel owing to greater demand from the domestic producers may negatively affect its demand and thereby offset its production. This uncertainty is expected to influence the dynamics of ferrochrome industry in the country.

Central & South America market is mainly driven by the rising production of specialty and stainless steel in Brazil. Globally, Brazil is one of the leading exporters of steel and was ranked 10th in 2017 in terms of its exports. Currently, in Brazilian automotive sector, beneficial policies for domestic vendors are the key factors driving the stainless steel production which contributes in consumption of ferrochrome.

The global ferrochrome market is largely dictated by China, as China is the largest supplier and consumer of FeCr. The suppliers in China are unorganized independent smelters who procure chromite ore from countries such as India, South Africa, and Turkey to produce ferrochrome.

This report forecasts revenue growth at global, regional & country levels and provides an analysis on the industry trends in each of the sub-segments from 2008 to 2030. For the purpose of this study, Grand View Research has segmented the global ferrochrome market on the basis of product, application, and region.