The global fertilizer catalyst market size was valued at USD 2.8 billion in 2020 and is expected to expand at a compound annual growth rate (CAGR) of 2.4% from 2021 to 2027. Catalysts are organometallic compounds that find widespread application in fertilizer and refinery applications. The market is majorly driven by product innovation aimed at reducing greenhouse emissions and improving process efficiency. The implementation of new pollution norms is expected to provide a positive impetus to market growth. Haldor Topsoe and Clariant have developed products that aim at reducing greenhouse emissions, along with improving material recovery. Major governments globally are implementing regulations on the production of ammonia, ammonium nitrate, and calcium ammonium nitrate, complex fertilizers, and nitric acid plants. The implementation of these norms is expected to force manufacturers to procure catalysts that help counter these problems and make the process sustainable. 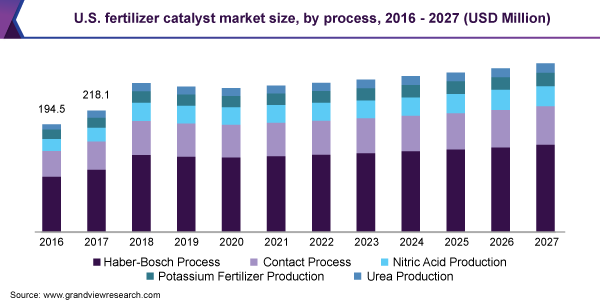 The U.S. dominated the North American market in 2020. It is the largest producer and exporter of phosphorus and ammonia in the world. The U.S. is the fourth-largest manufacturer of nitrogen fertilizers and the second-largest producer of phosphate globally. The U.S. market is largely driven by the sustainability initiatives undertaken by the local governments. In the last three years, manufacturers in the U.S. have invested around USD 3.8 billion in capital expansions aimed at achieving sustainability initiatives formulated for the fertilizer industry.

Fertilizer production across the globe is growing at a steady pace backed by rising yields and the growing demand for food. It is estimated that around 60% of the global food supply is facilitated by synthetic fertilizer production. However, rising sustainability initiatives undertaken by the local manufacturers have called for the implementation of efficient manufacturing practices globally. Catalysts play an important role in improving process efficiency by reducing the formation of by-products, along with improving the selectivity of the processes.

The raw materials used in the production of fertilizer catalysts are base metals such as iron, nickel, zinc, vanadium, chromium, and copper, along with precious metals such as platinum, rhodium, palladium, and ruthenium. The prices of most base metals have fallen, but the drop in prices is substantially lower than that of oil prices. The largest declines have been observed in the prices of copper and zinc, which have fallen by around 15% since January 2019.

The slowdown in global activities, particularly in China, which accounts for more than half of the global consumption of metals, has impacted the market scenario of base metals. Production disruptions resulting from shutdowns of mines and refineries due to the outbreak of COVID-19 are also impacting supply. As per the current estimates, 15% of copper mines and 20% of zinc mines are currently either offline or operating at reduced capacities. However, major iron ore operations in Australia and Brazil have been impacted to a lower extent because of their highly automated and remote operations.

Haber-Bosch accounted for the largest revenue share of 56.8% in 2020. The Haber-Bosch process involves the production of ammonia from hydrogen and nitrogen. Ammonia is one of the important raw materials used in the manufacturing of fertilizers. It is an important starting material for chemicals, such as urea, ammonium sulfate, and calcium ammonium nitrate. The ammonia production in 2018 was 1,46,004 thousand tons and is expected to grow at a steady rate of 1.2% from 2019 to 2025.

Urea production is expected to witness significant growth over the forecast period. Urea is among the highest consumed nitrogen fertilizers globally. The catalyst used in the process is primarily deployed to remove carbon monoxide from the process. The presence of carbon monoxide results in catalyst poisoning and can impact the yield of urea. Iron-chromium complexes are majorly used in the process. The demand for urea is growing at a rapid pace, thus resulting in positive forecasts for catalyst consumption.

Iron-based catalysts held the largest revenue share of 32.6% in 2020. The demand for these catalysts is high in the market because they are inexpensive and easily accessible as compared to other metals, such as calcium, potassium, and aluminum, for manufacturing fertilizers. The adoption is high as they also help in controlling greenhouse emissions and decrease energy consumption during the manufacturing process. However, the major problem associated with their usage is high storage costs.

Vanadium-based catalysts are used to produce sulfuric acid with the help of the contact process. Sulfuric acid is used in the manufacturing process of fertilizers, such as ammonium sulfate and superphosphate of lime. The high conversion rates and the ability to reduce sulfur dioxide (SO2) gas emissions in the environment are driving the adoption of these catalysts. 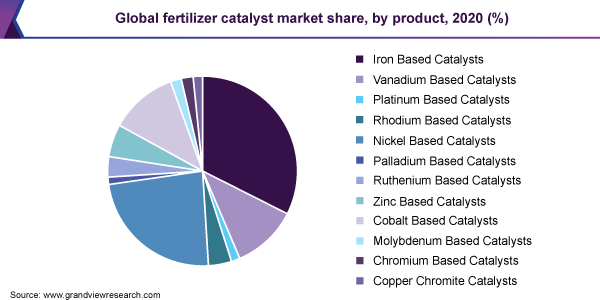 Platinum, along with rhodium, ruthenium, palladium, iridium, and osmium, forms a group of elements called platinum group metals (PGMs). Platinum-rhodium gauze-based catalyst is used in the Ostwald process for manufacturing nitric acid (HNO3), which is used to produce nitrogen-based fertilizers. It is a standard practice in the industry to use platinum-rhodium gauze-based catalysts as it provides better durability and boosts the efficiency of the reaction.

Asia Pacific held the largest revenue share of 56.6% in 2020 and is expected to expand at the fastest CAGR from 2021 to 2027. India and China are the major economies contributing to the growth of the market in the Asia Pacific owing to the large population and changing lifestyles. The presence of large-scale urea and ammonia manufacturing facilities in China, along with significant capital investments in countries such as India, Vietnam, Indonesia, and Thailand, is anticipated to drive the demand for fertilizer catalysts. The implementation of stringent regulations on the fertilizer sector owing to pollution concerns is a major market trend.

The agriculture sector is the backbone of the Indian economy as it provides employment to around 50% of the workforce and contributes about 18% to the country’s GDP. India is the third-largest producer of nitrogenous fertilizers, behind the U.S. and China. The demand for fertilizer catalysts in India is majorly driven by chemicals such as urea and diammonium phosphate.

The Central and South America region is one of the leading exporters of food and agricultural commodities, marked by the presence of significant unexploited agricultural land. Argentina drives the agriculture sector in the region through innovative farming practices. Brazil leads the regional market with a dominating agricultural GDP that accounts for approximately 23.5% of the total economy. Argentina is also a major contributor through innovative farming practices that are resulting in agriculture commodities earning over half of the foreign exchange and accounting for 10% of the country’s GDP.

Partnerships and collaborations, along with new product development initiatives, are the major factors influencing the competitive scenario in the market. Service agreements with distributors or local companies are on the rise, as manufacturers look to penetrate emerging economies. New product development is important for any catalyst manufacturer as it provides an opportunity to escape the supply-demand cycle. Manufacturers are making significant investments in research and development to develop products that suit the rising sustainability and material loss problems. Some prominent players in the global fertilizer catalyst market include:

This report forecasts volume and revenue growth at the global, regional, and country levels and provides an analysis of the latest industry trends and opportunities in each of the sub-segments from 2016 to 2027. For the purpose of this study, Grand View Research has segmented the global fertilizer catalyst market report on the basis of product, process, and region:

How big is the fertilizer catalyst market?

b. The fertilizer catalyst market size was estimated at USD 2.8 billion in 2020 and is projected to reach USD 3.3 billion by 2027.

What is the fertilizer catalyst market growth?

b. The fertilizer catalyst market is anticipated to grow at a CAGR of 2.4% from 2021 to 2027. The market is majorly driven by product innovation aimed at reducing greenhouse emissions and improving process efficiency.

Which segment accounted for the largest fertilizer catalyst market share?

b. Iron-based catalyst dominated the market with a share of 32.7% in 2020. The demand for these catalysts is high in the market because they are inexpensive and easily accessible as compared to other metals such as calcium, potassium, and aluminum for manufacturing fertilizers.

Who are the key players in the fertilizer catalyst market?

What are the factors driving the fertilizer catalyst market?

b. The fertilizer catalyst market is expected to be driven by growing application in the production of fertilizers and the need for improving process efficiencies.