The global fixed and mobile C-arms market size was valued at USD 2.02 billion in 2021 and is expected to expand at a compound annual growth rate (CAGR) of 5.6% from 2022 to 2030. The market growth can be attributed to the growing number of surgical procedures, and technological advancements in the development of novel C-arms. In addition, the rising geriatric population, which is susceptible to various chronic disorders, is also expected to contribute to the market growth. 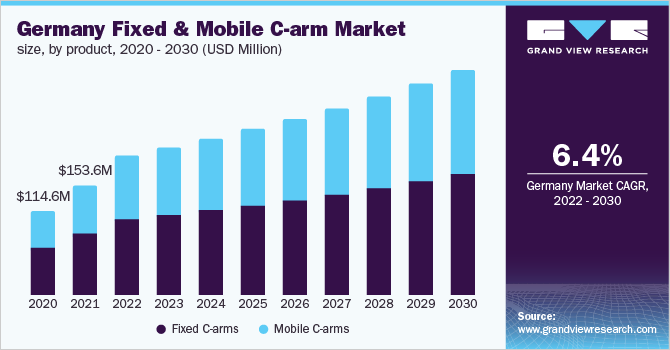 The use of C-arm systems in intraoperative procedures has become an important tool in modern surgical practice. It enhances the technical proficiency of the surgeon in addition to reducing the morbidity and patient’s duration/length of stay (LOS) in the hospital. The powerful imaging system on the C-arm allows for many movements to be performed in a single session. C-arm machines are widely utilized in orthopedic, urology, gastrointestinal, pain management, cardiovascular, emergency, and therapeutic studies such as stent or needle placements.

Many market players make constant efforts to develop advanced systems, such as the integration of Artificial Intelligence (AI)-enabled technology and 3D mapping capabilities in a C-arm system, which would improve process planning, increase real-time intraoperative guidance, and considerably reduce surgical operation times. For instance, in January 2022, Philips announced the integration of cloud-based AI and 3D mapping into its mobile C-arm System Series - Zenition - to enhance workflow efficiency and improve endovascular treatment outcomes. Philips further stated that the combination of these technologies would result in a 50% reduction in radiation exposure and a more than 20% reduction in procedure times.

The rising geriatric population susceptible to various chronic conditions such as cardiovascular, orthopedic, and respiratory diseases, coupled with increasing patient awareness, is expected to drive the market growth over the forecast period. According to the WHO, the population of people aged 60 years and above will be about 2.1 billion by 2050 from 1.5 billion in 2020. In addition, the increasing level of accuracy with 3D visualization and the introduction of flat-panel detectors replacing image intensifiers, which lowers patient dose and increases image quality, has led to increasing demand for these devices in recent years, allowing healthcare experts to understand the intensity of a disease better.

The COVID-19 pandemic negatively impacted the C-arms market, since these systems are used in guidance for mostly elective surgeries. Studies suggest that about 28 million elective procedures may be canceled around the world during the COVID-19 pandemic's peak disruption period of 12 weeks. However, the elective surgery rate has increased by one-fifth after the lockdown and also decreased elective surgery waiting times by as much as one-third, thus creating opportunities for market expansion.

The fixed C-arm segment dominated the market and accounted for the largest revenue share of over 50.0% in 2021. The continued advancements in fixed C-arm technology and clinical improvements have transformed fixed C-arm applications. They can be installed not just in radiology and cardiology departments, but also in surgical departments with access to a variety of medical specialties, where regular film X-rays were previously used to provide imaging for surgeons. When developing an operating room, a fixed C-arm is usually considered because its image quality has historically been superior to other newly developed moveable C-arms. A fixed C-arm can be floor-mounted or ceiling-suspended.

The mobile C-arm segment is expected to expand at a significant CAGR over the forecast period. The ability of mobile C-arms to move around the patient, achieving the best angle for a high-quality image while keeping the patient comfortable, is one of its most significant advantages. In addition, constant technological developments such as motorized axes that make movement and positioning easier are expected to propel segment growth. The mobile C-arm segment is further segregated into mini and full-sized C-arms.

The mini C-arm segment is expected to register the fastest CAGR during the forecast period. In this system, the monitor, generator, tube, image intensifier, console, and C-arm are all incorporated into one unit. This compactness saves a lot of space and eliminates complexity in the operation room. Furthermore, mini C-arms are also less expensive than standard-sized systems.

Based on application, the orthopedics and trauma segment held the largest market share of over 20.0% in 2021, owing to the high incidence of musculoskeletal disease, and a rise in the geriatric population. Studies suggest that about one million hip and knee replacement surgeries are performed in the U.S. annually. Furthermore, according to the International Osteoporosis Foundation (IOF), hip fracture rates in men and women are anticipated to rise by 310% and 240% respectively, by 2050, compared to the rates in 1990. The C-arm system has wide applications in orthopedic surgeries, owing to its precision in operating rooms, including good image quality, operability, and adaptability. 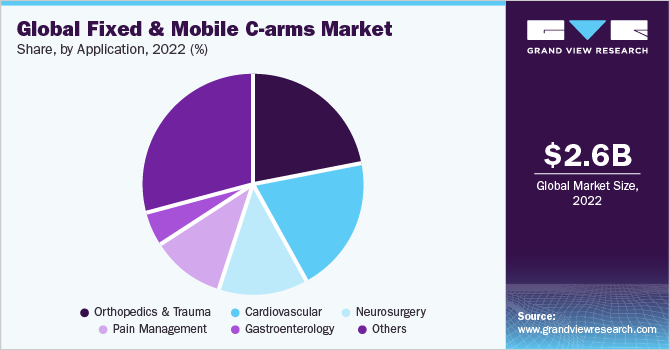 The neurosurgery segment is anticipated to witness the fastest CAGR during the forecast period. The data provided by the C-arm system is important for guiding minimally invasive surgeries and monitoring outcomes. Neurosurgery necessitates a high level of attention to detail, a little change throughout the surgery might have a substantial impact on the patient's functional and clinical outcomes. Thus, high-resolution C-arm technology can provide an exact image of the brain anatomy that is essential for procedures.

The cardiovascular segment is also expected to witness the fastest growth during the forecast period, owing to the increase in the prevalence of Cardiovascular Disorders (CVD) and the ability of the C-arm system to generate 3-D/4-D CT images. According to the WHO, CVDs are the leading cause of death worldwide, affecting about 17.9 million people per year.

North America dominated the market and accounted for the largest revenue share of around 38.0% in 2021. The market is driven by factors such as increasing adoption of advanced technology and improved healthcare infrastructure, strong purchasing power, and a fair reimbursement framework. According to the Centers for Medicare and Medicaid Services, the U.S. government spent nearly USD 4.1 trillion on healthcare in 2020, accounting for approximately 19.7% of the total GDP. Furthermore, the increase in elective surgery rate after the COVID-19 pandemic and the rising prevalence of chronic disorders is expected to boost the demand for C-arm equipment in the region.

The Asia Pacific fixed and mobile C-arms market is anticipated to grow at the fastest rate over the forecast period owing to a growing need for better imaging technologies and supportive government initiatives for improving healthcare infrastructure in this region. The presence of well-established hospitals and critical care centers as well as a large target patient population is anticipated to boost the growth. Furthermore, increasing awareness among people and growing medical tourism in the region are some additional factors expected to drive the growth of the Asia Pacific market.

The prominent market players focus on technological advancements and introducing advanced and next-generation C-arms to hold a strong market position. The rising demand for mini-C-arms across the globe is likely to promote the entry of new companies into the market. Furthermore, strategic industrial developments of the leading players in the form of acquisitions, mergers, government approvals, and collaborations are anticipated to boost the competition among these players. For instance, in March 2021, GE Healthcare received FDA clearance for its OEC 3D, a surgical imaging C-arm system capable of 3D and 2D imaging. Some of the prominent players in the global fixed and mobile C-arms market include:

This report forecasts revenue growth at global, regional, and country levels and provides an analysis of the latest industry trends in each of the sub-segments from 2017 to 2030. For this study, Grand View Research has segmented the global fixed and mobile C-arms market report based on product, application, and region:

How big is the fixed and mobile c arms market?

What is the fixed and mobile c-arms market growth?

Which segment accounted for the largest fixed and mobile c-arms market share?

b. North America dominated the fixed and mobile c-arms market with a share of 38% in 2021. The dominance of this region can be attributed to the well-established healthcare infrastructure, the high adoption rate of advanced technology, and the presence of a large target population.

Who are the key players in the fixed and mobile c-arms market?

What are the factors driving the fixed and mobile c-arms market?

b. Key factors that are driving the fixed and mobile c-arms market growth include the growing number of surgical procedures and technological advancements in the development of novel C-arms.