The global floating power plant market size was valued at USD 1.0 billion in 2019 and is expected to grow at a compound annual growth rate (CAGR) of 9.5% from 2020 to 2027. Increasing demand for clean electricity among end-use sectors along with the lack of power infrastructure across several nations are anticipated to propel the market growth over the forecast period. Floating power plants (FPPs) act as a distributed power source with high efficiency and stability. This peak power source is capable of responding to steep load fluctuation and offers quick start-up. The plants are towable and suitable for seasonal and periodic operation, providing grid stabilization for various kinds of renewable energy. These factors are anticipated to positively influence the industry landscape over the forecast period. 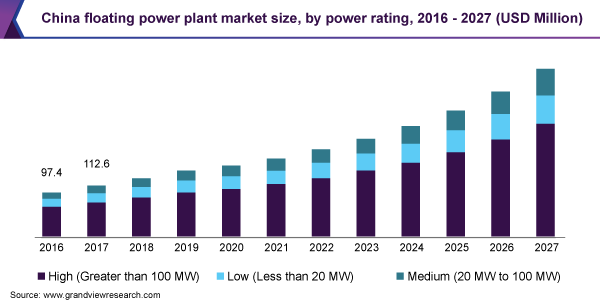 The market in China is expected to witness a significant growth owing to the presence of major FPP developers along with ever-increasing demand for continuous power supply across end-use markets in the nation. China is one of the largest manufacturers of solar PV panels and the government is deploying solar energy-operated FPPs to boost its energy structure and grid power services.

Growing awareness regarding the advantages, such as fast electricity supply to regions with limited power infrastructure, mobile asset offering easy relocation, no requirement for a large site, and provision of secure power supply during natural disasters, of FPPs are expected to propel the market growth over the forecast period. Stringent government regulations regarding environmental protection are expected to escalate the deployment of FPPs across several regions.

Floating power plants when compared to conventional land-based systems, have a minimal environmental impact as only a small area of coastal or up-river land is required. In addition, the rising usage of renewable energy as a power generation source in FPPs is projected to further drive the market growth over the forecast period.

Non-renewable segment occupied the dominant market position in 2019 accounting for more than 50% of the overall share owing to the high-power density, high reliability, and low operating costs of gas turbines or IC Engine-based FPPs. Leading manufacturers are emphasizing on overcoming the limited power output capacity of floating gas turbines, thereby boosting the segment growth over the forecast period.

For instance, Siemens manufactured the SGT-8000H-class industrial gas turbines with a power output capacity of 140 MW for its FPP facilities. The company has extended its seafloat turbine range with large-scale gas turbines providing up to 1.2 GW power. Power plants located further offshore are supplied with natural gas from the ships rather than from the land. Additional platforms near docked ships are equipped with the technology that is needed to convert the liquid fuel into a gaseous one.

The renewable segment is projected to grow at the highest CAGR over the forecast period owing to the implementation of favorable environmental policies supporting the usage of clean fuels for power generation. Solar, wind, and wave energy are the three most commonly used renewable sources for power generation on FPPs. Moreover, the scarce availability of wind sites and large land area occupation of solar sites are expected to create a growing demand for renewable power plants.

The high-power segment led the market in 2019 accounting for a share of over 66%. The segment will retain its dominant position throughout the forecast period owing to large scale power demand in South Asian economies, such as China, India, Singapore, and Malaysia. Continuous population growth and rapid development of infrastructure in end-use industries, such as healthcare, manufacturing, and construction, are also likely to boost FPP market growth over the forecast period.

However, the medium-power segment with a capacity between 20.1 MW to 100 MW is anticipated to register the fastest CAGR over the forecast period owing to the growing number of renewable energy-based FPP projects. For instance, in January 2020, the Electricity Generating Authority of Thailand along with B.Grimm Power announced an EPC contract to construct a hybrid hydro and solar energy FPP at the EGAT dam. 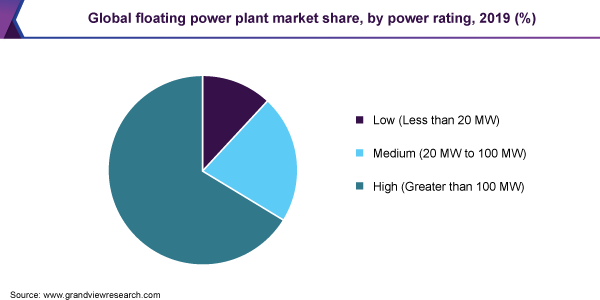 The project worth USD 27 million is expected to utilize 45 MW capacity crystalline solar panels to generate power during the day and remaining from the existing hydropower of Sirindhorn dam. Moreover, the installation of the HDPE plastic floating platform for the project proves to be eco-friendly and not dangerous to aquatic animals. Such initiatives will encourage the participation of several manufacturers, signing new projects for constructing FPPs in the medium power range.

Asia Pacific is accounted for the largest revenue share of over 38% in 2019 and will remain dominant expanding at the fastest CAGR over the forecast period. This growth is attributed to the lack of power infrastructure and the high adoption rate of renewable energy sources for power generation in developing economies, such as China and India.

An increasing number of potential projects of renewable energy-based FPPs have resulted in attracting major market players to the region thereby fast-tracking the market growth over the next seven years. However, higher installation and maintenance costs of these plants at sea are anticipated to partially hinder the industry growth.

Europe was the second-largest regional market in 2019 owing to the presence of key players and market specialists across the region. Siemens Gas and Power GmbH & Co., Wartsila, Floating Power Plant A/S, Ideol, and MAN Diesel & Turbo SE are some of the leading industry players operating in the European region, propelling the deployment of large-scale FPP projects.

North America is also expected to have a prominent growth over the forecast period owing to the implementation of strict regulatory reforms focusing on cleaner power generation initiatives. The U.S. and Canada are the major revenue contributors as these countries are emphasizing on developing cleaner fuel LNG-based power ships, which, in turn, supports industry growth.

Industry participants are focusing on local production of FPP equipment to minimize emissions, optimize logistics costs, and offer local employment. In addition, operators tend to be less vulnerable to investment risk due to the high adaptability, mobility, and versatility of FPPs. Market players undertake several growth initiatives, such as strategic partnerships to raise capital for an FPP project and offer their individual expertise in different segments of the FPP supply chain, thereby minimizing overall project cost. Some of the prominent players in the floating power plant market include:

This report forecasts revenue growth at global, regional, and country levels and provides an analysis of the latest industry trends in each of the sub-segments from 2016 to 2027. For the purpose of this study, Grand View Research has segmented the global floating power plant market report on the basis of power source, power rating, and region:

How big is the floating power plant market?

What is the floating power plant market growth?

b. The high power segment accounted for a revenue share of 66.4% in the global market in 2019. A growing number of renewable energy-based floating power plant projects are anticipated to drive this segment.

Who are the key players in the floating power plant market?

What are the factors driving the floating power plant market?

b. Key factors driving the floating power plant market growth include increasing demand for clean electricity among end-use sectors along with a lack of power infrastructure across several nations.