The global flue gas desulfurization market size was valued at USD 25.1 billion in 2019 and is expected to grow at a compound annual growth rate (CAGR) of 4.8% from 2020 to 2027. Implementation of stringent air quality standards to reduce SOx emission levels is anticipated to drive market growth over the forecast period. Proliferating demand for electricity along with significant investments in thermal power plants in the Asian countries is also expected to stimulate market growth. In addition, the presence of stringent emission regulations along with the rising demand for FGD systems in India, Indonesia, Vietnam, and South Africa is anticipated to surge the product demand over the forecast period. 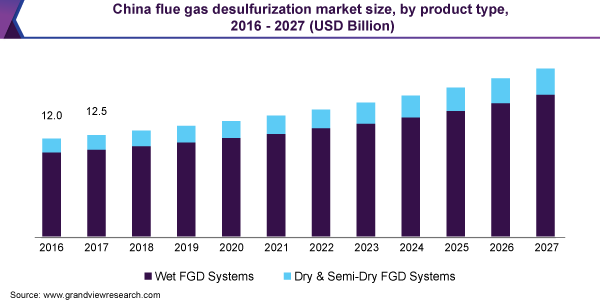 Under the existing FYP, China’s coal power capacity is kept at 1.1 TW and a wide range of targets have been set to increase the country’s energy mix share of non-fossils by 15%, thereby restricting the FGD market growth. However, the Chinese government’s focus on stimulating the economy with investments and a recent shift towards energy security has cast aside concerns about financial viability, overcapacity, and environment, which is expected to surge the product demand over the forecast period.

High market demand for FGD gypsum is expected to encourage companies to install FGD systems in their power plants. FGD gypsum has applications in a wide range of segments including agriculture, highway construction, gypsum panel products, mining applications, water treatment, cement production, and glassmaking. It is also used as a soil amendment in various soil conditions. In addition, FGD by-products are also used in manufacturing wallboard, cement, and plaster of Paris.

The limestone wet FGD system is a very capital intensive process and is mostly used with high sulfur coals. Limestone is only economical if there is an aftermarket for gypsum and the plant life is long. For short-lived power plants, lime is a better choice as it requires much lower investments. The annual costs of compressors, fans, valves, and nozzles are approximately 15% of the original cost. Over the coming years, the new system purchases are expected to decline, thereby the replacement components market is larger than that for new components. Air pollution from coal-fired plants causes a serious risk to human health as these power plants emit a large number of hazardous air pollutants. These air pollutants can cause lung and heart diseases and damage to skin, eyes, brain, and breathing passages.

The wet FGD product type segment led the market in 2019 and accounted for the largest share of over 85%. The highest SOx removal efficiencies are achieved by wet FGD systems, more than 90%, and the lowest by dry FGD systems, around 80%. More than 85% of the FGD systems installed across the globe are wet systems owing to their lower reagent and operating costs, more fuel flexibility, and possible use of by-products. In addition, these systems could provide removal efficiencies up to 99% and have the ability to remove oxidized mercury as well.

Wet FGD systems typically require wastewater treatment, wet stack, and alloys or coatings for chloride protection, which increases the overall capital costs. On the other hand, dry FGD systems have significantly lower capital and annual costs because they are simpler, waste disposal is less complex, and require less water. Hence, dry FGD systems are anticipated to register the fastest CAGR over the forecast period.

The dry FGD process has been developed into a multi-pollutant (Hg, HF, HCl, SO3) control technology in recent years. In addition, they are being highly used in large-scale power plants on account of the emergence of more efficient dry scrubber technologies, such as NID and CFB-FGD. More than 25% of the dry FGD by-product was utilized in the U.S. in 2018, according to the American Coal Ash Association.

The components, repairs, & consumables segment led the market in 2019 accounting for over 72% of the overall share. The market for components, consumables, & repair is on the rise on account of the high annual costs of FGD systems, which includes O&M labor costs, auxiliary power, reagents costs, wastewater treatment costs, repair and maintenance costs, and others. Life cycle costs for FGD plants are at a higher side than the capital costs resulting in creating opportunities for third-party service providers, thereby increasing the segment growth.

According to the global energy monitor, 74,412 MW of new coal plants were established in 2019, up 45.2% from 2018. More than 75% of these were made in China and India alone. Despite significant overcapacity in the sector with more than 50% of the coal-fired power plants in China already in losses as they are running at 50% of their capacities, the construction of new power plants is on the rise because of the ease in relaxations and permits. 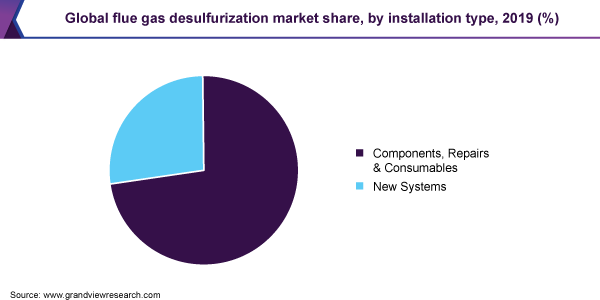 Southeast Asia is one of the few regions where the share of coal in the power mix increased in 2018, and the demand for coal is anticipated to increase steadily over the forecast period. Indonesia, Vietnam, Bangladesh, and South Korea are expected to contribute 18.6% of the total coal-fired power plant pipeline projects over the coming years, according to the global energy monitor. As a result, the demand for new FGD systems in the Asia Pacific is on the rise.

However, in developed regions, such as North America and EU28 countries, the market for new systems is expected to decline as countries are opting for coal phase-out. In addition, rising concern about air quality standards along with the increasing prevalence of respiratory issues associated with air pollution has forced these countries to opt for greener alternatives, which have further reduced the demand for new coal-fired power plants.

Asia Pacific led the market in 2019 accounting for more than 74% of the global share. The region will expand further at the fastest CAGR over the forecast years. The demand for FGD systems in India is expected to see a surge owing to the FGD implementation plan (2018-2022). According to the Indian Ministry of Environment, Forest and Climate Change (MoEFCC) norms, 161,522 MW of thermal plants will have to curtail their SOx emissions by retrofitting FGD systems by December 2022. In September 2018, the Central Electricity Authority made recommendations to incentivize the early installation of pollution control equipment, which has further stimulated the market growth in recent years.

According to the data shared by the Ministry of Energy and Mineral Resources, Indonesia for 12,080 MW capacity (which covers only the large coal-based units) showed that FGD systems have been installed only at Units 3 and 4 of the Tanjung Jati B power station of 710 MW each. The plants employ a wet FGD system using limestone. The government has been requested to be more ambitious and implement stricter emission standards for coal-based power plants, which are anticipated to surge product demand over the coming years.

Many national governments across Europe have announced their intention to phase out coal by 2030 or earlier. A total of 72,800 MW of coal power capacity, which is approximately 40% of Europe’s currently operational coal feet, are on a pathway to closure by 2030. In November 2016, France had committed to a coal phase-out by 2023; however, in June 2019, the coal phase-out was regulated through the climate and energy law (effective in January 2022), which is supposed to make the coal power plants unprofitable.

With around 46,000 MW of open coal capacity, Germany has planned short-term closures of 12,500 MW coal capacity by 2022 and review points in 2023, 2026, 2029, and 2032. The country aims a complete phase-out of coal by 2038 with the option of bringing it forward by 2035. Contrary to the initiatives taken by the EU28 countries, countries such as Poland (5 new coal units under construction) and Turkey (30,000 MW of new coal capacity by 2023), are backing coal and are planning to increase their coal-fired capacities over the coming years.

The leading FGD suppliers in recent years have been Fujian Longking Co., Ltd., Wuhan Kaidi, and other Chinese suppliers. BHEL has emerged as the major FGD supplier in India as it has received two orders worth USD 334 million (INR 2500 crores) from the National Thermal Power Corporation (NTPC) in 2019. The company has technology collaborations with Mitsubishi Hitachi Power Systems (MHPS) and has bagged FGD orders for more than 50 thermal units. Some of the prominent players in the flue gas desulfurization market include:

This report forecasts revenue growth at global, regional, and country levels and provides an analysis of the latest industry trends in each of the sub-segments from 2016 to 2027. For the purpose of this study, Grand View Research has segmented the global flue gas desulfurization market report on the basis of product type, installation type, and region:

How big is the flue gas desulfurization market?

What is the flue gas desulfurization market growth?

b. Asia Pacific dominated the flue gas desulfurization market with a share of 74.8% in 2019, owing to the implementation of stringent environmental regulations in India and ASEAN countries.

Who are the key players in flue gas desulfurization market?

What are the factors driving the flue gas desulfurization market?

b. The key factors that are driving the flue gas desulfurization market include the rising popularity of dry FGD systems along with substantial incremental growth opportunities in air pollution control equipment in the developing economies.