The global foam dressing market size was valued at USD 1.67 billion in 2021 and is projected to expand at a compound annual growth rate (CAGR) of 4.7% from 2022 to 2030. The demand for foam dressing products is increasing owing to increasing burn cases, various ulcers, open wounds, and rising surgical cases across the globe. Furthermore, diabetes is expected to be a major factor causing wounds. Thus, a rise in the number of people suffering from diabetes is anticipated to drive the market. For instance, International Diabetes Federation projected the number of diabetic patients to be 61 million in 2021. 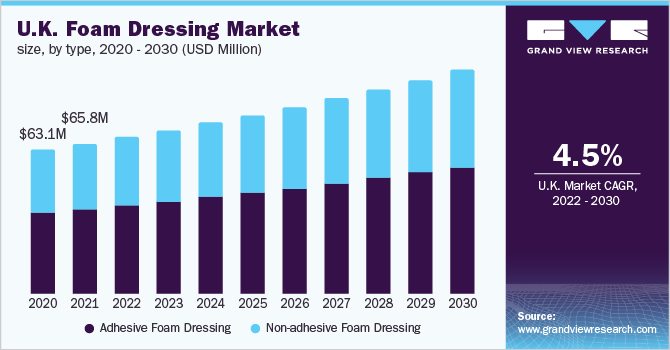 Additionally, an increase in the number of obese people is expected to increase the number of people suffering from pressure ulcers and venous leg ulcers, which may increase the demand for foam dressing. For instance, the prevalence rate of obesity in the U.S. was 30.5% in 1999 - 2000, which increased to 41.9% in 2017 - March 2020. Similarly, according to Ethnicity facts and figures by the U.K. government, in November 2020, around 62.80% of adults were obese or overweight, thereby impelling the market growth.

Furthermore, the rise in the number of traumatic injuries and burn cases across the globe is expected to propel market growth. For instance, as per National Institute for Health and Care Excellence, in the U.K., an estimated 250,000 people are treated with burn injuries every year. Similarly, according to the National Program for the prevention of burn injuries and NCBI, the annual incidence rate of burns in India is estimated to be around 6 - 7 million every year. Moreover, there have been cases of traumatic wounds such as abrasion, laceration, and gunshot, which require foam dressing. For instance, as per NCBI, 6 million lacerations are treated in the U.S. yearly. Thus, propelling market growth over the forecast duration.

The worldwide need for foam dressing products was significantly reduced due to COVID-19. However, as a result of international border openings brought about by vaccine development, the market is anticipated to grow post-COVID-19. It is anticipated that the previously postponed elective surgeries will be conducted during the post-pandemic period, boosting the usage of foam dressing. To meet the demand, many businesses are implementing a variety of methods, including new launches, mergers and acquisitions, collaboration, and expansion.  For instance, in May 2022, Winner Medical was going to showcase its new development in the advanced wound care segment. The company was expected to launch bordered silicone foam dressing with antibodies and SAF in the exhibition. This was estimated to help the company penetrate its products among the population.

The non-adhesive foam dressing segment is projected to impel at a CAGR of 4.6% during the forecast period. This can be attributed to rising surgical cases and surgical site infections worldwide. For instance, according to the National Healthcare Safety Network (NHSN) Surgical Site Infection Surveillance in 2018, there are approximately 157,500 instances of SSIs reported annually in the United States. Additionally, the rise in the number of non-infected diabetic foot ulcers, and the increase in the number of organ donation cases are expected to consequently drive the segment's growth.

The chronic wounds segment dominated the market for foam dressing and accounted for a revenue share of 59.9% in 2021. The segment is projected to witness a considerable growth rate over the forecast period. The rise in the number of geriatric population, and the increasing prevalence of venous leg ulcers, diabetic foot ulcers, pressure ulcers, and other chronic wounds are expected to drive the segment growth. For instance, according to the Australia Demographic Statistics, 2019, between 1999 - 2019, the population aged more than 65 increased from 12.3% to 15.9%. Similarly, as per Population Reference Bureau, 28% of the total Japanese population was aged more than 65. The geriatric population is associated with more skin fragility, as a result, they are more susceptible to chronic wounds, thereby impelling segment growth.

The acute wound segment is projected to witness the fastest CAGR of 4.8% during the forecast period. The rising cases of different traumatic wounds such as gunshot wounds, lacerations, stab wounds, and road accidents are the major factor driving the segment growth. For instance, according to Pew Research Center, injuries caused by firearms claimed the lives of 45,222 Americans in 2020. Moreover, as per a similar source, the gunshot wound increased by 14% from 2019 to 2020, whereas, the same increased by 25% over the past five years. Reduced surgery site infections, better outcomes, patient satisfaction, and shorter hospital stays are just a few of the many advantages of acute wound solutions. Additionally, burn injuries are becoming more common worldwide. The use of foam dressing products is anticipated to drive the segment's expansion since these are used in treating acute wounds, such as above mentioned traumatic wounds.

In 2021, the hospital segment dominated the market for foam dressing and accounted for the largest revenue share of 45.3% 2021. The increase in surgical operations due to sedentary lifestyles throughout the world and the rise in bariatric treatments, which call for the usage of foam dressing products to prevent surgical site infections, can be contributed to this market segment's growth. Additionally, hospitals are regarded as significant purchasers of foam dressing who have long-term agreements with providers. The segment is therefore expected to grow during the forecast period as a result of the aforementioned causes. 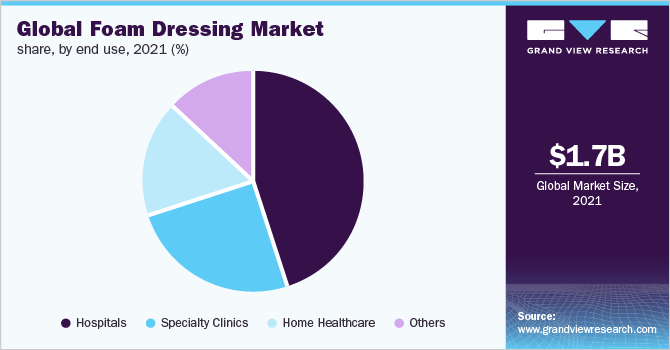 The home healthcare segment is expected to witness the fastest CAGR of 5.4% during the forecast period. During the pandemic outbreak, home healthcare wound care products were more in demand due to the increasing number of geriatric populations. For instance, according to United Nations, in the world, it is anticipated that the proportion of people 65 and over will rise from 9.3% in 2020 to almost 16.0% in 2050. The elderly population is expected to frequently opt for care at home or in nursing homes. Thus, the rising older population worldwide is anticipated to impel segment growth.

Additionally, the market for home care services is being supported by the existence of numerous organizations providing these services in North America and Europe. As a result, it is predicted that the segment will grow throughout the projection period due to a growth in the number of elderly people and nursing home care.

North America dominated the foam dressing market and accounted for a revenue share of 45.4% in 2021. The segment is expected to witness a considerable growth rate over the forecast period. The growth of the market is primarily driven by the vast population base and growing patient pool in nations like the U.S., and Canada. Additionally, because diabetic people are more likely to sustain chronic wounds, a rise in the diabetic population is likely to surge the demand for foam dressing supplies in this region. For instance, as per the American Diabetes Association, almost 1.9 million Americans, including roughly 244,000 children and teenagers, have type 1 diabetes, whereas, 11.3% of the population, or 37.3 million Americans, were estimated to have diabetes in 2019. Additionally, the increasing number of gunshot wounds, traumatic accidents, and availability of skilled professionals in this region are expected to drive the demand for foam dressing products in North America.

In the Asia Pacific, the market for foam dressing is estimated to witness the highest CAGR of 5.3% during the forecast period. This can be linked to the region's increased chronic diseases and obesity caused by changing lifestyles. For instance, according to Asia Development Bank Institute, there are around 1 billion overweight and obese people in the Asia Pacific region, which is the highest population in the world. Moreover, as per a similar source, in the Asia Pacific region, 2 out of 5 adults are either overweight or obese. Obese people are more susceptible to another chronic diseases such as diabetes, venous leg ulcers, and pressure ulcers, thereby impelling the market in the region.

Due to the presence of numerous small and major manufacturers, the market for foam dressing is highly fragmented. The presence of numerous companies in the market is projected to increase rivalry and level of competitiveness throughout the forecast period. Leading players also participate in partnerships, product launches, mergers, and acquisitions to expand their product lines. For instance, Avery Dennison Medical launched eight products in 2019 during the Medica International Trade Fair. One of the eight products included the latest foam wound dressing for moderate to high exudates, which features a PU foam and super absorbent composite pad.  As a result, the market for foam dressing is anticipated to grow throughout the forecast period due to various strategies adopted by top players. Some of the prominent players in the foam dressing market include:

This report forecasts revenue growth at global, regional, and country levels and provides an analysis of the latest industry trends in each of the sub-segments from 2018 to 2030. For this study, Grand View Research has segmented the global foam dressing market report based on type, application, end-use, and region:

How big is the foam dressing market?

What is the foam dressing market growth?

Which segment accounted for the largest foam dressing market share?

b. The adhesive foam dressing segment dominated the foam dressing market in 2021 with a market share of 56.53% and is expected to witness the fastest growth over the forecast period due to rise in high exudate wounds, and product launches

Who are the key players in foam dressing market?

What are the factors driving the foam dressing market?