Single-use NPWT devices are gaining traction in the field of wound care management over conventional products. For instance, major players like Smith & Nephew introduced a single-use NPWT, PICO, which has gained huge acceptability worldwide. The increasing prevalence of chronic diseases, such as diabetes, is anticipated to impact the industry demand to a large extent. This is primarily attributable to the fact that diabetes often results in complications such as diabetic foot ulcers. 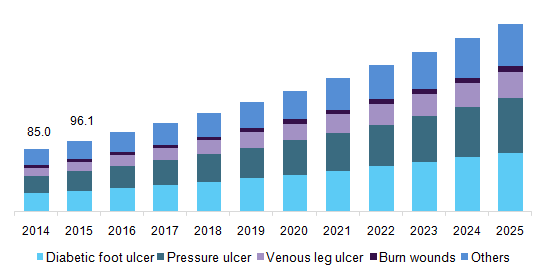 The incidence of diabetic ulcer among the U.S. population has been estimated to be 2% annually, which is expected to support the growth of the market. In addition, traumatic events are on the rise in regions such as Asia Pacific. Burns lead to complete destruction of the skin rendering the wound bed dry. Therefore, increasing number of such traumatic wounds is projected to boost the demand for wound therapeutics and subsequently the market.

On the basis of end use,the negative pressure wound therapy market has been segmented into hospitals, homecare, and others. Hospital segment dominated the NPWT market in 2015 owing to the fact that conventional devices are widely used in hospital settings.

Homecare setting is projected to be the fastest growing segment with the highest CAGR over the forecast period. NPWT therapy for homecare settings is emerging with the introduction of single-use NPWT systems. These products eliminate the need for hospital stays and hence render the overall therapy cost-effective with its usage at home.

On the basis of product type, the negative pressure wound therapy vertical is segmented into conventional and single-use NPWT devices. Conventional devices contributed toward the largest share in 2015 owing to their high price and usage rate. Such systems require hospital admission and are not suitable for homecare settings as they involve the use of heavy canisters. These devices can be rented as well purchased, which is expected to increase the usage rate of NPWT in developing countries owing to its low purchasing power. 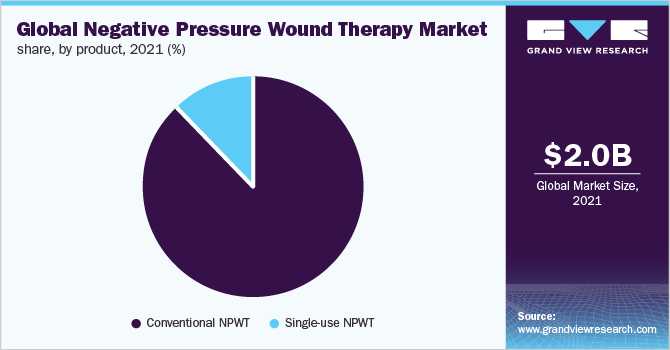 Single-use NPWT devices segment is expected to grow at a lucrative CAGR over the forecast period. This is due to their wide applicability in homecare settings, which has prompted major companies to focus on increasing their cost-effectiveness. This has proved to be an added advantage for single-use NPWT devices in the developing countries.

On the other hand, pressure ulcers are projected to witness the highest CAGR over the forecast period. The primary factor contributing toward such growth is its emerging application in treating pressure wounds such as bedsores. The other wound types, among others, include arterial ulcers and surgical wounds.

North America held the largest share of NPWT market in 2015 owing to rising healthcare expenditure and highly developed healthcare infrastructure in this region. This has led to greater adoption of NPWT devices in both hospitals as well as homecare settings.

Asia Pacific is anticipated to show lucrative CAGR over the forecast period. This is mainly due to increasing number of traumatic events, Nephewplcsuch as burn, which in turn is triggering the demand for therapy in this region.

The companies are focusing on mergers, acquisitions, new product development and strategic collaboration strategies. For instance, in 2016, Acelity entered into a partnership agreement with Mediq with an aim to distribute its product offerings in advanced wound therapeutics and regenerative medicine in Finland, Denmark, Sweden, and Norway. In addition, ConvaTec launched Avelle NPWT System in UK in 2016. These are advancing superior technologies, which are expected to foster the market growth in the long run.

This report forecasts revenue growth at global, regional & country levels and provides an analysis on the latest trends and opportunities in each of the sub-segments from 2014 to 2025. For the purpose of this study, Grand View Research has segmented the global negative pressure wound therapy market on the basis of product, wound type, end-use and region: