The global folding bicycle market size was valued at USD 514.5 million in 2018 and is expected to register a CAGR of 8.8% over the forecast period. Growing popularity of foldable bicycles owing to advantages including intermodality and retrenching of space is expected to remain a favorable factor for the industry growth. Increasing spending on recreational activity among working-class professionals at the global level in order to keep the mind fresh and improve body fitness is projected to upscale the requirements of the foldable bicycle. Additionally, an increased number of cycling paths in developed economies including the U.S., Germany, and the U.K. is expected to play a key role in promoting the scope for folding bicycles over the next few years.

Folding bicycles have the ability to work as conventional bicycles with lightweight, enhanced flexibility, compactness, and additional merit of traveling through metros and subways. Consumers can keep these cycles inside their homes as they take up very small space. Consumer awareness pertaining to environmental pollution, fitness, and personal health is expected to promote the utility of the foldable bicycle in the upcoming years. 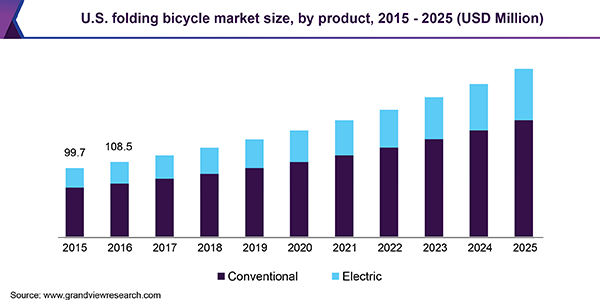 However, the majority of the urban population is facing traffic-related problems in their daily lifestyle. Long vehicle queues and hours spent in jams are expected to force the consumers to purchase foldable bicycles in order to travel timely and safely within the city limits. Governments and private organizations have been encouraging consumers to adopt these foldable bicycles as their primary mode of transportation to reduce pollution. Additionally, the national authorities have been investing in separate cycling route development and implementing laws, which can provide safety for the cyclists.

For instance, in December 2018, the Dutch government announced to invest of USD 390 million in the development of cycling infrastructure, which can get around 200,000 more people commuting by bicycle in the next three years. Garmin International, Inc., Salesforce,ViaSat, SunPower Corporation, REI,Patagonia, and Kimberly-Clark Corporation are some of the companies promoting “Bike to Work” concepts among their employees to maintain their physical as well as mental health. These trends are expected to open new avenues for the folding bike market over the next few years.

Conventional foldable bicycles generated a revenue of USD 373.3 million in 2018. Consumers prefer these bicycles due to their easy availability and cost-effective features. Furthermore, the industry participants are offering a wide range of products with unique styles and colors to attract consumers.

Electric folding bicycles are expected to expand at the fastest CAGR of 10.0% from 2019 to 2025. Consumers are more inclined to purchase these bicycles due to their excellent convenience and ease of traveling. The product comes with lithium batteries, which have the ability to keep the vehicle moving up to 60kms. It has been observed that a large urban population faces outdoor charging problems. Electric foldable bicycles are capable of solving the charging problems as the people can charge the bicycle inside the room. Furthermore, a rider can have higher speed with this product as compared to conventional bicycles, which makes it popular among adventure lovers.

26-inch size folding bicycle generated a revenue of USD 203.5 million in 2018. These products are recommended mainly for people with a height of 5.5” to 6”. Over the past few years, mountain biking has become popular as they offer health benefits including improved blood circulation, less stress on the joints, increased brain power, reduced stress, improved mood, improved balance, and coordination for whole body workout.  Consumers, especially mountain bikers, are expected to prefer these products over the next few years.

A 20-inch folding bicycle is expected to be the fastest-growing segment at a CAGR of 9.8% from 2019 to 2025. Consumers prefer to purchase 20 inches foldable bicycles as they are convenient to carry anywhere including lifts, corporate offices, and homes. Manufacturers are designing these size variants with high-speed features. Consumers also have the access to increase the speed of the bicycle with less effort, which is attracting the millennial population.

The offline distribution channel was the largest segment with a revenue of USD 412.6 million in 2018. A large number of consumers opt to purchase from this channel due to the availability of test-drive options. These stores are also providing customized buying options, where consumers can choose their customized designs and colors. Moreover, the availability of different branded products in local supermarkets or other stores will drive the demand for this channel in the near future. 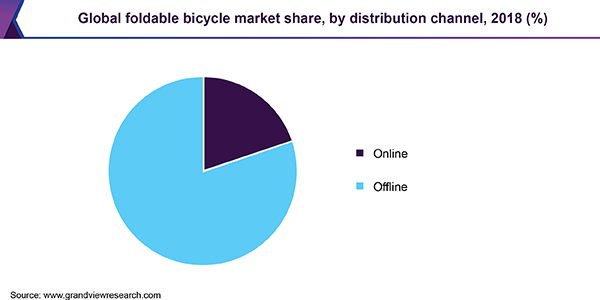 The online segment is projected to be the fastest-growing channel, expanding at a CAGR of 11.8% from 2019 to 2025. These channels provide attractive discounts on every product, which attracts consumers to purchase from this channel. Some of the key online suppliers are Ali Express, Amazon, and Flipkart. In addition, increasing penetration of smartphone users in developing economies including China, India, Brazil, and Mexico will further boost consumer engagement in online stores.

Europe was the largest market, accounting for 34.3% share of the global revenue in 2018. It has been observed that the European population prefer to use a bicycle as a part of their daily transportation medium. The urban population in developed economies including Germany, the U.K., France, and Italy prefer to use foldable products as it takes less space. Furthermore, supportive government initiatives on the usage of environmentally friendly vehicles in countries including France and the Netherlands are expected to open new avenues for foldable bicycles over the next few years.

Asia Pacific is estimated to be the fastest-growing market, expanding at a CAGR of 10.3% from 2019 to 2025. The increasing popularity of sports events including cycling and mountain biking by adults in countries including China, Japan, India, and Indonesia is expected to remain a key factor driving the industry. Moreover, increasing residential property cost in urban cities is driving consumers to purchase foldable convenient alternatives such as folding bicycles, which they can keep at home.

Some of the key players operating in this are Dahon, A-bike, Giant Bicycles, Helix, Bike Friday, Montague Bike, Brompton Bicycle, GOGOBIKE, Birdy Bike, and FOREVER Bicycle. Companies are increasing their spending on new product development in order to expand their brand reach. For instance, in July 2018, Hummingbird Bike launched an electric foldable bike with a weight of 10.3 kg and made with 160-watt lithium battery. Furthermore, industry participants are expected to use e-commerce portals as a selling forum for the millennials who are increasing their spending on cycling as a recreational activity in order to improve their body fitness.

This report forecasts revenue growth at the global, regional, and country levels and provides an analysis of the latest industry trends in each of the sub-segments from 2015 to 2025. For the purpose of this study, Grand View Research has segmented the global folding bicycle market report on the basis of product, size, distribution channel, and region: