The global foot and ankle devices market size was valued at USD 1.5 billion in 2016 and is projected to grow at a CAGR of 10.03% over the forecast period. The market is expected to exhibit lucrative growth opportunities, owing to the rising geriatric population and prevalence of target diseases such as osteoporosis.

Osteoporosis causes a decrease in bone density causing fractures even after minor trauma. Almost 8.9 million people suffer from the disease annually causing an osteoporotic fracture every 3 seconds. It majorly affects menopausal women and causes 1 out of 3 women over the age of 50 to experience an osteoporotic fracture. This indicates the scope of expansion of the market. 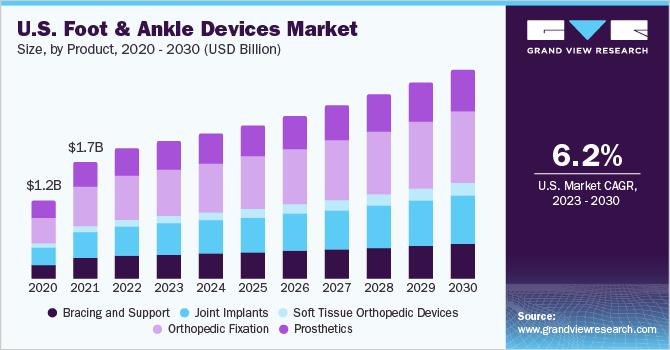 Increasing number of road accidents and sports activities is further fueling the demand for foot and ankle devices. Urbanization of the emerging markets adds to the risk of fractures. Moreover, with an increase in the professional sporting activities, sports-related injuries have increased. An ankle sprain is the most common injury across the globe.

According to Health City Cayman Islands, 239,943 injuries were treated at the U.S. hospital emergency rooms, out of which 79,384 were strains & sprains, 48,806 were fractures, and 5,401 were dislocations. In 2013, almost 50 million fractures were reported across the globe. In 2010, nearly 8 million fracture repair procedures, such as internal and external fixation, are performed worldwide.

Based on the product, the market is segmented into bracing and support, joint implants, soft tissue orthopedic devices, orthopedic fixation, and prosthetics. The need for joint implants has been growing over the last decades due to increasing life expectancy and the desire to stay active. Aging baby boomers are the major consumers of joint replacement products, mostly due to their desire to retain mobility. Bracing is used as a part of post-operative rehabilitation therapy. Athletes commonly use braces to prevent bone and muscle injuries.

Athletes participating in soccer or baseball games are at a higher risk of soft tissue injuries. Meniscal tear-a connective tissue injury-is common among the youth. Almost 250,000 soft tissue reattachment surgeries are conducted in the U.S. per year. There are various products focused on orthopedic tissue repair available in the market. Orthocell offers an Ortho-ATI-a tendon regeneration solution. The company is planning to register its product in other countries in 2017.

Injuries to the foot and ankle ligaments are among the most common injuries. Some severe foot and ankle injuries are likely to lead to long-term disability or morbidity. These injuries are commonly observed among adults and children, especially athletes. Trauma has a significant share in the foot & ankle devices market and valued USD 263.3 million in 2016 and is projected to reach USD 616.6 million in 2025.

Hammertoes are considered to be an endemic forefoot deformity as nearly 20% of the total American population gets affected by this condition. Forefoot deformities generally remain undiagnosed due to lack of knowledge about this disease. In this case, one or more toes of patients are bent in an abnormal position and they can face difficulties in finding the right fitting shoes. The friction between skin and shoes can cause severe injuries.

In 2012, around 550,000 hammertoe surgeries were performed to treat orthopedic forefoot deformities and this number is expected to grow to 648,000 by the year 2017. According to Nextremity Solutions, Inc., nearly 60 million Americans suffer from hammertoe and related deformities. Moreover, their research states that majority of this population has not been diagnosed or undergone surgeries for treatment. In the U.S., around 1.2 million surgical procedures are conducted every year for hammertoe correction.

Millions of people are injured and disabled in road accidents. According to the National Safety Council (NSC), the U.S. witnessed the highest number of road accidents and related deaths and injuries in the year 2016. Almost 4.6 million people sustained injuries that required medical consultation. The economic burden of road accidents was worth USD 412 billion in that year in terms of property damage, loss of productivity, and employer costs involved.

North America dominated the overall market in terms of revenue in 2016. A high rate of unintentional injuries and large geriatric population are the key factors for the large market share of this region. Various trauma centers established by the government are specialized to handle emergencies.

In Asia Pacific, Japan is expected to spearhead the growth in the coming years. The rising geriatric population in Japan and China, road crashes, and developing economies is expected to promote the emergence of the market in this region.

According to the American Diabetes Association, more than 23 million people are living with diabetes and of those almost 6.0% of patients suffer from foot ulcers that require conventional wound management approaches. Diabetic foot ulcers require a longer healing period and are likely to be infected. The alarming rate of road accidents and rising incidence of diabetes and osteoporosis have resulted in the need for an efficient healthcare system and trauma devices in this region. This is also likely to boost the foot and ankle devices market over the forecast period.

The Obamacare device tax enforced in the U.S. in January 2013 was suspended for 2 years in December 2015 and this suspension is expected to be permanent. It will allow companies to invest more in R&D and offer products at a lower price.

Mergers and acquisitions are also expected to contribute to market growth. Companies are collaborating with manufacturers and marketing firms, thus facilitating the development of better products available at lower prices. For example, in 2016, DePuy Synthes acquired BioMedical Enterprises to gain the latter’s extensive product portfolio of foot and ankle devices. In addition, Stryker Corporation’s acquisition of the assets of Small Bone Innovations in 2014 added to the company’s small joint replacement products, following which the net sales of the company increased by 9.6% in the same year. All the aforementioned factors are anticipated to boost the market in the U.S. and ensure its dominance over the forecast period.

The existing players are strengthening their foothold in the industry by introducing technologically advanced products. Regulatory bodies such as the US FDA and the European CE mark, although stringent, are approving equipment that fulfills all clinical data requirements and other safety criteria. For instance, in September 2015, Extremity Medical received FDA approval for IOFiX Foot and Ankle System.

This report forecasts revenue growth and provides an analysis of the industry trends in each of the sub-segments from 2014 to 2025. For the purpose of this study, Grand View Research has segmented the foot and ankle devices market on the basis of product, application, and region: