The global forensic imaging market size was valued at USD 56.6 million in 2019 and is expected to grow at a compound annual growth rate (CAGR) of 10.6% from 2020 to 2027. Growing preference for virtopsy or virtual autopsy over traditional autopsy method is one of the major market drivers. Growing awareness regarding the value of virtual autopsy as an alternative or supplement to the traditional “body opening” autopsy has boosted the growth of the market. The application of cross-sectional imaging modalities such as CT, MRI, X-ray, and ultrasound in the forensic examination has facilitated post-mortem medical investigations to be performed quickly and minimally invasive. In addition, integration with artificial intelligence and expanding applications of the imaging modalities in the identification of the deceased and matching of severed body parts is expected to open new avenues of market growth. 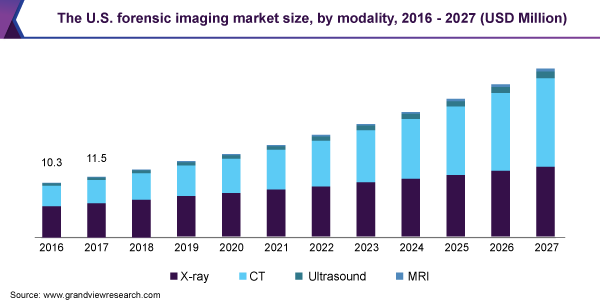 A virtual autopsy is a non-invasive technique, which is becoming a preferred choice for communities against the traditional autopsy. For instance, the Buddhist culture in Japan does not favor autopsy. Whereas, the religious beliefs of Muslims, Jews, and some Native Americans do not support conventional autopsy either. Therefore, the growing acceptability for virtual autopsy worldwide is anticipated to propel the growth of the market.

The increasing preference for virtual autopsy in judiciary systems is anticipated to expand the use of the forensic imaging modalities. At times, the photo evidence developed from a traditional autopsy procedure is very disturbing and gruesome for lay viewers, thus impeding its acceptability in court proceedings. In such cases, 3D reconstructed images with necessary markings developed through the usage of modern imaging technologies are more palatable and appreciated by judges. Moreover, the digitalization of the evidence enables data storage and prevents its vulnerability towards tampering.

The increasing global crime rate, lack of human resources in medical examiner offices, and the advent of advanced technology are the factors expected to drive the growth of the market. For instance, Virtobot, an integrated robotic system comprising of MRI, CT, Angiography, and navigation systems equipment with documentation and 3D simulation software provides forensic information without mutilating the body.

The X-ray segment held the largest market share of 52.6% in 2019 and is anticipated to experience lucrative growth over the forecast period. The imaging modality was considered as the gold standard for the identification of the deceased body in forensic medicine. The primary indication for X-ray scans in forensic includes gunshot, air embolism, and motor crash deaths. The increasing usage of modern imaging equipment such as CT and MRI with time has contributed to its declining installation rate. However, in developing and undeveloped regions of the world, limited accessibility and affordability to imaging technologies, X-ray still finds its usage in forensic imaging.

The CT segment is expected to witness a CAGR of 13.7% during the forecast period. A postmortem CT examination can more precisely locate lesions and fractures in complex regions such as the spine, neck, face, and pelvis of the corpse, compared to traditional autopsy. In addition, the practice of CT examination prior autopsy to narrow down the autopsy scope is getting wider acceptance owing to the cost and time benefits. For instance, if a CT scan signifies that a car accident victim died due to head trauma and has a normal pelvis and abdomen, then the autopsy would be limited to the head region.

MRI is not widely used in forensic imaging because of its high cost, complexity, and presence of stringent protocols for imaging. An MRI is often recommended as an adjunct to CT scans due to its ability to deliver excellent soft-tissue contrast images of the neurological tissue such as the brain and spine. Moreover, the limitation such as single body part scan at a time and requirement of specific body conditions have kept the utilization rate of MRI in forensic imaging low.

The death investigations segment held the largest market share of 77.2% in 2019. The increasing number of unnatural deaths such as murders, suicide, and accidental trauma has contributed to the largest market share of the segment. Moreover, strong evidence requirement by the court, underlying the exact cause of death in cases lacking proper eyewitness, has fueled the utilization of virtual autopsy.

The application of forensic imaging for clinical studies is expected to experience a surge in the demand during the forecast period. An increasing number of voluntary body donors for anatomical studies and frequent outbursts of novel deadly diseases have contributed to its growing market share. For instance, an autopsy of COVID19 deceased may be risky through the traditional method. However, the demand for an autopsy of such corpses is high to understand the pathophysiology of the new disease. In such cases, radiological imaging can be used to perform virtual autopsy by minimizing the risk of the spread of infection.

Forensic institutes held the largest revenue share of 64.1% in 2019 in the forensic imaging market. Increasing research activities to study the assessment and impact of the application of modern imaging technologies in forensic medicine have boosted the installation rate of imaging technology in forensic institutes. For instance, the Victoria Institute of Pathology Sydney and Institute of Forensic Medicine Denmark have already installed CT scanners for forensic imaging purposes.

The hospital segment is expected to witness a healthy CAGR of over 11.1% during the forecast period, as hospitals are equipped with all specific requirements such as floor space, technical staff, capital, pathologist, and radiologist for performing a virtual autopsy under one roof. In addition, problems such as cost, risk, and time associated with the transfer of corpse to forensic institutes for the investigation will lead to an increase in the adoption of forensic imaging tools in hospitals in the coming years. 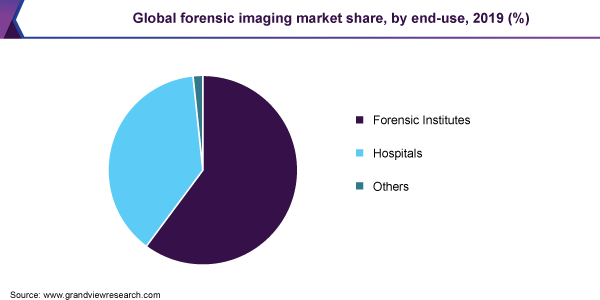 The others end-use segment includes medical colleges, private autopsy centers, and forensic labs. The adoption rate of the virtual autopsy is low in this segment owing to a lack of capital and technical expertise. However, with growing awareness and improving accessibility towards modern imaging technologies, the segment is expected to witness significant growth over the forecast period.

Europe held the largest market share of 35.6% in 2019 and is expected to continue its dominance over the forecast period. The early adoption of radiology imaging in forensics especially in the U.K., Switzerland, Netherlands, and Denmark is anticipated to drive the market in the region. In addition, numerous events such as conferences, workshops, and seminars conducted to increase reach and awareness about the application of forensic imaging are anticipated to propel market growth. For instance, the annual meeting of the International Society of Forensic Radiology and Imaging was held in Germany in 2019. The stakeholders across the globe gathered at this annual meet to share their experience about the benefits of using imaging modalities in forensic medicine.

North America held the revenue share of 28.9% in 2019 and is expected to grow at a decent rate during the forecast period. The growing shift from coroner system to a medical examiner system in the U.S. will boost the demand for forensic imaging. That has caused a shortage of pathologists in the country. The U.S. is expected to show huge demand for additional pathologists at autopsy examiner centers in the coming years to cope with the heavy workload. This is anticipated to increase the adoption of advanced imaging technologies in autopsy centers, which, in turn, will help them to lower the number of unnecessary autopsies performed.

In Asia Pacific, the market is anticipated to grow at the fastest rate during the forecast. The usage of forensic imaging is well established in forensic especially in countries such as Jana, Australia, China, and Thailand. For instance, many general hospitals use modern imaging tools as triage or alternative tool for autopsy. Additionally, Japan has established an imaging information center dedicated to autopsy to facilitate teleradiology in the practice of forensic imaging.

Key companies are stressing on research and development to make CT imaging more accessible and affordable for forensic centers. For instance, in Jan 2019, Cannon launches a low cost and compact-sized 16 slice CT scanner called “Aquilion Start CT” suited for forensic imaging services at the event called Arab Health 2019. The market players are adopting various strategies such as mergers and acquisitions, product launch, entering joint ventures, and development of low-cost equipment especially for developing economies to gain market share. For instance, in April 2020 Fujifilm is set to acquire its rival Hitachi Medical Imaging, later this year. The process of acquisition has slowed down by the impact of the global pandemic. Some of the prominent players in the forensic imaging market include:

This report forecasts revenue growth at global, regional, and country levels and provides an analysis of the latest industry trends in each of the sub-segments from 2016 to 2027. For the purpose of this study, Grand View Research has segmented the global forensic imaging market report on the basis of modality, application, end-use, and region:

How big is the forensic imaging market?

What is the forensic imaging market growth?

Which segment accounted for the largest forensic imaging market share?

b. Europe dominated the forensic imaging market with a share of 35.56% in 2019. This is attributable to the high utilization rate of imaging modalities in the performance of autopsy especially countries such as the U.K., Switzerland, The Netherland, and Denmark. Additionally, the increasing number of conferences related to the application of radiology imaging in forensic being held in Europe is propelling its market growth.

Who are the key players in the forensic imaging market?

What are the factors driving the forensic imaging market?

b. Key factors that are driving the forensic imaging market growth include increasing global crime rates, rising preference for virtual autopsy, and the improving affordability for imaging modalities.