The global field programmable gate array market size was valued at USD 9.0 billion in 2019 and is projected to grow at a compound annual growth rate (CAGR) of 9.7% from 2020 to 2027. The growing adoption of field programmable gate array (FPGA) in areas of security, network processing, and deep packet inspection is anticipated to drive their demand over the forecast period. They offer capabilities such as high compute density and low power consumption, which make them the preferred architecture for various applications requiring heavy data flow and streaming data processing. Increasing adoption of FPGAs in the military and aerospace application areas such as waveform generation, image processing, and secured communication is expected to drive the FPGA market growth over the next few years. 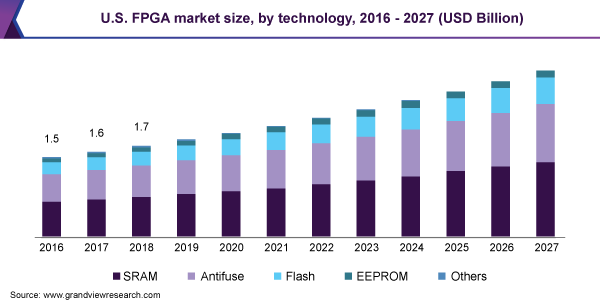 FPGAs are used in military equipment such as sensors, radars, and electronic warfare systems to attain higher range, data processing, and electronic countermeasures. With more countries focused on strengthening their military establishments, companies are continually innovating and developing field programmable gate arrays for military applications. For instance, in November 2018, Xilinx, Inc. launched the Kintex and Virtex portfolio of defense-grade field programmable gate arrays for space and military applications. These circuits have anti-counterfeiting features and are designed to withstand harsh environments and provide security and reliability of operation.

Similarly, Microsoft Corporation uses field programmable gate arrays in Azure that are integrated with Azure Machine Learning (ML). They are used for Deep Neural Network (DNN) evaluation, Software Defined Networking (SDN) acceleration and Bing search ranking. Furthermore, increasing investments in data center is another factor driving the market. Data centers deploy FPGAs at a large scale and ongoing investment in the same would propel the demand over the next few years. In February 2019, Google, Inc. announced an investment of over USD 13.0 billion in data centers across U.S.

Augmented demand for tailored integrated circuits is anticipated to fuel the market development over the forecast period. The field programmable gate arrays technology is evolving over time with low turnaround time, lesser cost incurred than Application Specific Integrated Circuit (ASICs), and lower power consumption. FPGAs are flexible as compared to ASICs as they can be reconfigured subsequent the designing and implementation of the circuit. This is likely to remain a high-impact driver over the forecast period as FPGAs allow designers to alter their designs even after the finished product has been installed in the field.

The automotive industry is one of the major contributors to the market demand. Advanced Driver Assistance System (ADAS) designers prefer FPGAs for vision processing applications that require high-level processing and fine-grained parallelism. Key manufacturers are continuously upgrading their product portfolio for suiting the changing requirements of the automotive industry. For instance, in November 2019, Xilinx, Inc. launched the new automotive-qualified circuits, 16-nm FinFET+, that target the ADAS and self-driving cars.

The Static Random-Access Memory (SRAM) segment accounted for the largest revenue share in 2019, as it offers better flexibility, re-programmability, high integration, and high performance for various applications. Wide adoption of SRAM-based field programmable gate arrays in military and aerospace, telecom and wireless communication systems, and consumer goods is contributing to the segment growth. The anti-fuse FPGAs are more robust than SRAM-based arrays, particularly in radiation environments. The segment is expected to witness significant growth over the forecast period owing to the faster boot time and higher reliability.

Flash-based FPGAs are anticipated to be the most prominently used technology over the forecast period. The segment is witnessing high demand as key players are upgrading their portfolio of flash field programmable gate arrays to cater to the growing application base. For instance, in October 2019, Lattice Semiconductor Corporation launched the CrossLinkPlus flash field programmable gate array family for the embedded vision system based on MIPI D-PHY interface. They provide improved display and sensor bridging, which is a requisite for the automotive, industrial, consumer, and computing applications.

The Electrically Erasable Programmable Read-Only Memory (EEPROM)-based FPGAs are likely to witness sluggish growth over the forecast period owing to rapid increase in usage of newer technologies such as SRAM and Flash. The slow growth over the next few years could be attributed to unceasing improvements in the new technologies, which are nonvolatile in nature, more flexible with respect to application requirements, and less power consuming.

The telecom sector accounted for the largest revenue share in 2019 and is anticipated to maintain its dominance over the forecast period. Vast usage of field programmable gate arrays in wireless communication and telecommunication sectors for several applications such as data packet switching, packet processing, and optical transport network is propelling the FPGA market growth. Moreover, they also provide bandwidth to telecom service providers to generate compatible networks from 3G to LTE and further. Advent of 5G network is expected to drive the FPGA growth further from 2020 to 2027 as they offer configurability, flexible hardware accelerators, high-speed switching, and low latency operation at low costs.

The military and aerospace segment is expected to grow at a substantial rate over the forecast period. Emergence of embedded field programmable gate array has particularly favored the aviation and defense industry by offering even better integration, reliability, and low power option over the traditional FPGAs. The Boeing company embraced e-FPGAs in 2018 for applications including encryption and decryption, which require high bandwidth input-output. FPGA manufacturers are innovating and developing state-of-the-art products for the growing need of this sector. For instance, Microchip Technology Inc. started working on the radiation tolerant, RT PolarFire FPGA for high-speed data paths in spacecraft applications and expects the product availability for space-flight deployment by 2021. 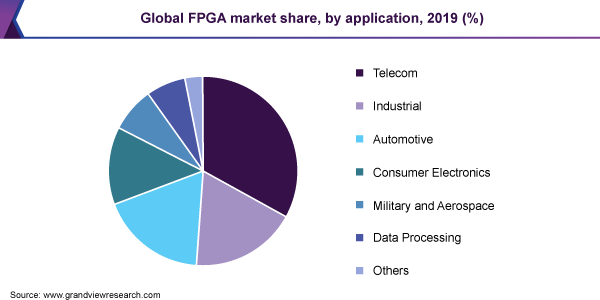 There has been a surge in the use of field programmable gate array in the consumer electronic industry, especially for gaming and computer devices. Mobile phone manufacturers are widely using FPGAs owing to their small size and low power consumption. The FPGAs perform Digital Signal Processing (DSP) functions such as signal processing and image enhancement in smartphones.

The ever-increasing number of smartphone users is also expected to provide new growth avenues for key market players. Several industrial application areas such as Industrial Internet of Things (IIoT), smart energy, and automation use FPGAs to enable system designers to meet evolving standards, thus increasing the scalability and performance while reducing the costs. The fourth generation of automation with even more advanced computing capacities is expected to drive industry growth.

The Asia Pacific region accounted for the largest revenue share of the field programmable gate arrays industry in 2019 and is expected to continue its dominance over the forecast period. China accounted for the largest revenue share in the region due to persistent investments and initiatives undertaken by the government to augment the industry growth. For instance, in March 2018, China set up a government-backed semiconductor fund of USD 28.9 billion to nurture its national chip industry. This initiative focuses on developing FPGAs, core processing units, and memory chips to create new opportunities in the market.

The North America regional market captured a revenue share of over 25.0% in 2019. Within the region, Mexico is expected to witness significant growth due to its flourishing automobile industry. The Semiconductor Industry Association (SIA), declared the signing of the U.S.-Mexico-Canada Agreement (USMCA) in November 2018. The USMCA ensures that more tech products like semiconductors made in America can be shipped to clients worldwide, by encouraging free trade. Such contracts are expected to drive the market growth over the coming years.

The South America region is anticipated to gain limelight as there is a boost in the automobile, industrial, and aerospace sector, especially in Brazil. Furthermore, tech companies are shifting and expanding their data center capacities to Middle East & Africa, which is expected to result in high growth prospects for the regional field programmable gate array demand. For instance, in 2019, Microsoft Corporation initiated data centers in the UAE and Amazon.com, Inc. launched three availability zones in Bahrain. Expansion of data centers in the region is expected to significantly cater to market growth.

The key players that dominated the global market in 2019 include Intel Corporation; Xilinx, Inc.; and Lattice Semiconductor Corporation. Companies are stressing on research and development to develop technologically advanced products to gain a competitive edge. For instance, in August 2019, Xilinx, Inc. developed the world’s largest field programmable gate arrays, VU19P, which features nine million system logic cells. The VU19P is built as four segments, however, acts as a single large piece of silicon with 35 billion transistors. This FPGA is designed to cater to the complex measurement, test, compute, and networking applications. The product is anticipated to be launched in the second quarter of 2020.

Suppliers are following the fabless approach, which helps them gain access to the fabrication facilities without incurring huge capital investment. Fabless firms can outsource the production of the FPGAs and focus their time, resources, and efforts to develop new ideas, devote in research and enhance their marketing tactics to boost their sales. It also helps them maintain variability in production velocity and volume, without overburdening on their resources. Some prominent players in the field programmable gate array market include:

This report forecasts revenue growth at global, regional, and country levels and provides an analysis on the latest industry trends in each of the sub-segments from 2016 to 2027. For the purpose of this study, Grand View Research has segmented the global field programmable gate array market report on the basis of application, technology, and region:

How big is the field programmable gate array market?

b. The global field programmable gate array market size was estimated at USD 9.01 billion in 2019 and is expected to reach USD 9.85 billion in 2020

What is the field programmable gate array market growth?

b. The SRAM-based segment dominated the industry share of over 45% in 2019 as these are majorly used for programming the routing to interconnect arrays and programming Conï¬gurable Logic Blocks (CLBs) used for implementing logic functions.

Who are the key players in field programmable gate array market?

What are the factors driving the field programmable gate array market?

b. Key factors that are driving the market growth include efficiency of FPGAs over ASICs, and growing applications in military & aerospace, consumer electronics, and the automotive industry.