The global fundus cameras market size was valued at USD 303.2 million in 2020 and is expected to expand at a CAGR of 5.8% from 2021 to 2028. The increasing geriatric population and chronic disorders, such as diabetes and hypertension, are responsible for the growth in the incidence of retinal disorders. Key retinal disorders include Diabetic Retinopathy (DR), Age-related Macular Degeneration (AMD), and Retinopathy of Prematurity (ROP). Furthermore, increasing awareness about eye disorders and the commercialization of several technologically advanced products are likely to propel the market during the forecast period. 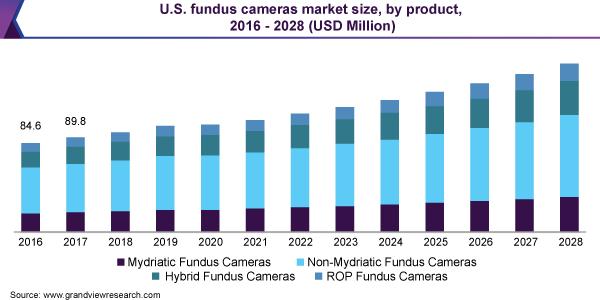 Diabetic eye diseases consist of a group of several eye conditions that include DR, diabetic macular edema, glaucoma, and cataract. According to the National Eye Institute (NEI), the U.S., the diabetic retinopathy patients in America are expected to double from 7.7 million in 2010 to 14.6 million in 2050. In addition, advancements in the field are expected to drive the market during the forecast period. COVID-19 has negatively impacted the market as the data captured during the pandemic was not accurate and sufficient to determine the eye problem. Lack of data limited the tracing of disease, its management, and treatment. However, handheld fundus cameras can be a useful option in this pandemic, as their portability will help in capturing the retinal changes in COVID patients present in different settings or locations.

Advancements from the digital camera, red-free fundus camera, film-based fundus camera to the development of other for clear and in-depth fundus imaging along with the growing adoption of these new technologies in emerging countries are anticipated to drive the market during the forecast period. Moreover, supportive government regulations are also expected to contribute to market growth. According to the laws and regulations of medical device agencies in the U.S. and Japan, the fundus imaging cameras must be replaced once in every 4 years. This law helps maintain the quality of instruments and, thereby, improves diagnosis and treatment. Hence, the law is likely to maintain the demand for devices in countries and boost the market.

COVID19 impact: Demand for handheld fundus camera increases by more than 15% as compared with 2019

However, factors such as pricing pressure and competition from other developed technologies are expected to hinder market growth. Optical Coherence Tomography (OCT), is an advanced technology developed for retinal reimaging. The technology provides detailed images of the retina and optic nerve, which are viewable in 2D and 3D formats. Furthermore, swept-source OCT is the latest generation of Fourier domain OCT technology. Advantages associated with swept-source OCT are better sensitivity and faster speed than OCT.

The non-mydriatic cameras segment dominated the market and accounted for the largest revenue share of 49.7% in 2020. It improves the ability of a practitioner to view detailed retinal anatomy and, thereby, improves the diagnosis and management of eye diseases. Furthermore, non-mydriatic cameras make use of fundus photography, which eliminates the need for dilating drops and bright lights; hence, fundus photography is more patient-friendly. This property also helps glaucoma patients for whom dilation is contraindicated. Advancements in non-mydriatic cameras, such as fluorescein imaging, portability, and live-action systems are anticipated to drive the market during the forecast period.

The mydriatic fundus cameras segment accounted for 19.9% of the share in 2020. The low share of the mydriatic camera or traditional fundus camera is attributed to the necessity of pupil dilation with the help of bright light or dilating drop to obtain a clear image of the retina. This is not comfortable for patients suffering from glaucoma and photosensitivity. Furthermore, advancements in the fundus cameras provide more clear, quick, and reliable images of the retina, which has resulted in a decrease in the demand for mydriatic cameras. Lower investment by industry players due to the low demand for mydriatic cameras may restrain the growth of the market during the forecast period.

The ophthalmic and optometrist offices segment dominated the market and accounted for the largest revenue share of 26.4% in 2020. The segment is expected to grow at the fastest rate of 6.5% during the forecast period due to increasing optometrist practitioners, preference for primary eye care, and low-cost services by ophthalmic and optometrist offices compared to ophthalmologists. For instance, about 40,000 optometrists were practicing in 2012 and this is expected to reach about 46,300 by 2022. Furthermore, a stagnated supply of ophthalmologists creates an opportunity for optometric offices to dominate the market. For instance, the lack of ophthalmologists in low-income countries in the Asia Pacific, Latin America, and Africa increase the demand for optometrists in emerging regions.

Hospitals include secondary care, tertiary care, and advanced care. Hospitals are mostly preferred for pediatric eye care services and complicated procedures where one or more ophthalmologists are available along with the diagnostic and surgical support services. However, preference for specialty eye clinics, such as ophthalmologist clinics and optometrist offices, may restrain the growth of the market. 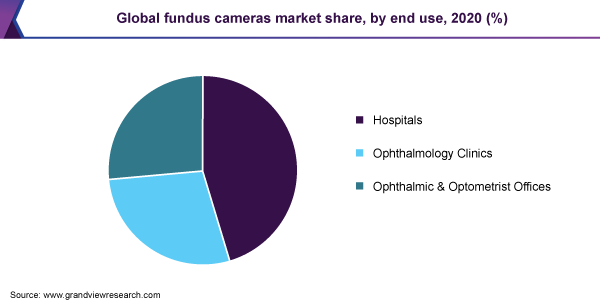 North America dominated the fundus cameras market in 2020 and held the largest share of around 37.4%. Major factors contributing to the growth of this region include the increasing geriatric population and technical advances in the field. Furthermore, approval and launching of fundus cameras in the U.S. and Canada and high adoption of new technologies are likely to boost the market share. Widening application of fundus cameras for early detection and screening not only for eye diseases but also for lifestyle-associated diseases is anticipated to propel the market during the forecast period.

In Europe, the market is likely to witness a CAGR of 5.9% over the forecast period due to the local presence of major market players; technological developments in fundus cameras, such as easy to use, portability, and development of hybrid cameras; and adoption of newer products. For instance, key players such as Carl Zeiss Meditec Group, Optomed Oy (Ltd.), and CenterVue SpA are headquartered in Europe. Furthermore, a rising number of diabetic retinopathy patients and the geriatric population is expected to boost the overall market during the forecast period.

In Asia Pacific, the market is anticipated to witness a CAGR of 6.0% during the forecast period because of the local presence of key players, availability of expert services, and growing medical tourism. In Asia Pacific, the market is majorly driven by China, Japan, India, and Australia. Japan dominated the market in terms of revenue share in 2020. This can be attributed to the local presence of major market players and a large geriatric population pool, whereas China is anticipated to be the fastest-growing market during the forecast period in the Asia Pacific.

Key strategies of the company include - expansion of the global sales network, the establishment of new production systems, and the enhancement of R&D capabilities. For instance, in December 2016, 51.0% shares of Mehra Eyetech Private Limited, an Indian based company was acquired by Topcon Corporation. The company distributes ophthalmic devices by Topcon in India. This acquisition is expected to strengthen the position of Topcon in the Indian market. Additionally, in June 2016, Optomed Oy (Ltd.) and Essilor GmbH entered into a distribution agreement of ophthalmic products in Germany. Such strategic initiatives by the market players are expected to drive the market during the forecast period. Some of the prominent players in the fundus cameras market include:

This report forecasts revenue growth at global, regional, and country levels and provides an analysis of the latest industry trends in each of the sub-segments from 2016 to 2028. For the purpose of this study, Grand View Research has segmented the global fundus cameras market on the basis of product, end-use, and region:

How big is the fundus cameras market?

What is the fundus cameras market growth?

Which segment accounted for the largest fundus cameras market share?

b. North America dominated the fundus cameras market with a share of 37.0% in 2019. This is attributable to the high awareness of eye disorders, increasing chronic disorders, and technical advances in digital and handheld devices.

Who are the key players in the fundus cameras market?

What are the factors driving the fundus cameras market?

b. Key factors that are driving the fundus cameras market growth include increasing eye disorders and supportive government regulations.

Which product segment dominated the fundus cameras market in 2020?

b. The non-mydriatic cameras accounted for the largest industry share of 49.7% in 2020, and the segment is further expected to witness substantial growth over the forecast period.

Which end-use segment is expected to show the fastest growth in the fundus cameras market?

b. The ophthalmic and optometrist offices segment is projected to advance at the fastest CAGR of 6.5% through 2028, on account of the increasing number of optometrist practitioners, and the low-cost services offered by them.

What are the growth drivers for the fundus cameras market in Asia Pacific?

b. The Asia Pacific market for fundus cameras is expected to be driven by economies such as China, Japan, India, and Australia, on account of the availability of expert services, and growing medical tourism in the region.

How did the COVID-19 pandemic affect the fundus cameras market?

b. The coronavirus pandemic offered a challenge to the fundus cameras market growth, owing to factors such as the capture of inaccurate and insufficient data, which impeded the accurate tracing, management, and treatment of the disease.

What are the major types of non-mydriatic and mydriatic cameras?

b. Both non-mydriatic and mydriatic cameras are further classified into tabletop and handheld, with the tabletop sub-segment dominating the overall demand.