The global fungicides market size was valued at USD 16.35 billion in 2019 and is anticipated to grow at a compound annual growth rate (CAGR) of 4.3% from 2020 to 2027. Demand for crop yield is increasing with growing population worldwide. This has led to high demand for multiple crop care chemicals as well as fungicides to reduce crop losses. 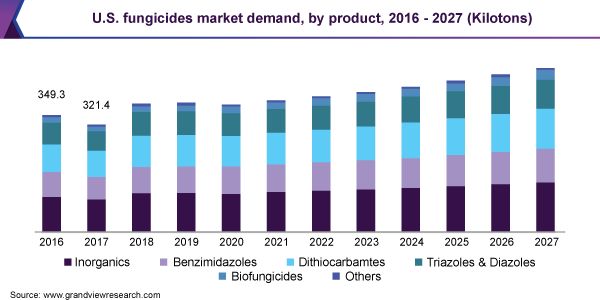 Multiple regions are agrarian economies including the majority of Asia Pacific, such as India, Indonesia, South Korea, and Thailand, American countries, such as Mexico, and Central and South America. These countries are widely dependent on their agricultural output as agriculture presents a significant portion of their GDP. For such countries, agricultural produce directly impacts the nation’s economy and therefore the farming committee is constantly made aware of the benefits of using various chemicals and other products to boost crop yield with least possible crop loss.

Fungicides are one of the most commonly utilized pesticides, which kill fungi and their spores, controls blights, rust and mildews or prevents crops against fungal infections, thereby reducing damages. However, since fungicides cannot prevent crop losses against all sorts of diseases, it is critically essential to understand the cause of the disease. For instance, the substance cannot control crop losses caused due to insects and abiotic factors. Therefore, agricultural communities are constantly updating the farming committee about the use of precise chemicals for various pest management measures.

There are multiple types of product that are utilized by the farming communities across the world. These include inorganic products, triazoles and diazoles, benzimidazoles, biofungicides, and dithiocarbamates. Each of these are utilized for various purposes. For instance, benzimidazole is typically applied to vegetables, fruits, cereals, and vines to control basidiomycetes and ascomycetes. Similarly, biofungicides produce several antibiotic substances that compete against fungi, parasites, and other fungi. These substances are also used in the production of greenhouse.

However, the overall industry has a significantly broader application range in multiple crop types, such as fruits and vegetables, cereals and grains, and oilseeds and pulses. The governments, along with other agricultural communities, are working constantly to spread awareness about the importance of using fungicides and other pesticides and allied information matrices, such as amount of usage per crop type, time interval between consecutive dosage, and understanding infection types, to ensure safe farming practices, thereby reaping maximum benefits.

However, biofungicides are most commonly utilized in seed treatment or as a preventive treatment in media growth. There are various ways of applying the substance, which include its application as drench post transplanting or incorporating into growing media before planting. Additionally, most of these biofungicides have reentry interval levels between 0 - 4 hours and have a varied shelf life, storage, and handling requirements based on their formulations.

Furthermore, there are multiple fungal infections such as rust and Septoria that occur to cereals and pulses, wherein utilization of fungicides does not aid in containing the crop losses. Triazoles among the azoles group of fungicides hold the ability to fight against such diseases. Farmers, however, do not always have access to different types of these substances and therefore critical awareness of the effectiveness of various substances is considered necessary.

Cereals and grains held the largest share of 65.5% in terms of volume in 2019. In cereals and grains, application of the substance needs utmost understanding of the disease types in order to be fruitful for both the farmers and the overall grains industry. Accurate identification of the crop symptoms enables farmers to apply precise amount of fungicides in order to refrain the spread of pathogens. Grains and cereals need constant monitoring across all seasons and understanding of cultivar resistance is considered to be the best approach towards ceasing fungal infections in grains. 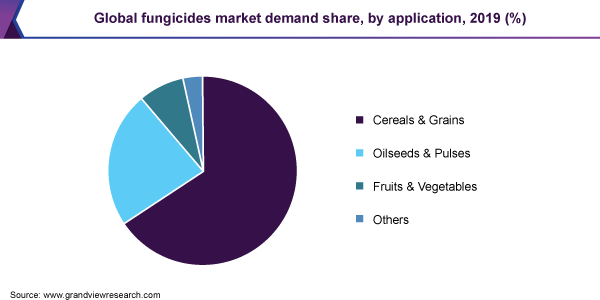 Fruits and vegetables are projected to be the fastest-growing segment with a volume-based CAGR of 4.6% from 2020 to 2027. However, blight is one of the most common fungal disorders, which is observed in fruits and vegetable plantations, especially early blight or Alternaria. Early blight can be detected by observing black spots on the leaves, followed by drying up of leaves and spots on fruits. Furthermore, fungicides are used to prevent mildews, such as downy mildew, and fungal infection, which occurs to vegetable and fruit-bearing plants.

The oilseeds and pulses segment is anticipated to witness substantial growth over the foreseeable future. Pulses such as peas and lentils are significantly important to the farming community, which attracts a lot of attention during the cropping season. There are certain ways to curb the spread of fungal diseases in oilseeds and pulses, which includes an understanding of the crop type and the diseases that these crops are prone to, analyzing the time frame of disease spread, having a holistic view of the canopy, and understanding the size of the plants and subsequent impact time frame of the diseases. Spreading awareness about these aspects has been proven beneficial for farmers globally to utilize fungicides at appropriate time intervals, resulting in the utmost efficiency in crop handling.

Asia Pacific held the largest revenue share of 38.2% in 2019 and is expected to witness the fastest growth over the forecast period. Asia Pacific is an agrarian economy with countries such as Indonesia, India, Thailand, South Korea, and Japan being largely dependent on the crop yields every year. Demand for crop care chemicals including fungicides and other pesticides is high. However, governments across these countries, coupled with agricultural communities, are constantly trying to induce the concept of modern farming, wherein the farmers and their committees are aware of the use of various chemicals, crop type, soil conditions, and periodic application of fungicides. This will create a larger impact on the crop output with lower investment.

The U.S. is the largest agricultural economy in North America with corn, wheat, soybean, alfalfa, and coffee contributing to a significant amount of production annually. The North American tropical zones are favorable for the production of bananas, sugarcane, oranges, coffee, and cocoa, which require intensive care and periodic monitoring to ensure that these crops are not infected by fungi or any other diseases. The agricultural sector in the U.S. contributed to USD 1.053 trillion in 2017 to the nation’s GDP, accounting for 5.4% of the overall country’s share.

Europe has extensive scope for organized farming and the industry in this region is benefited by the induction of the latest technology and modern equipment. Among the various pesticides used across European countries for farming practices, bactericides and fungicides cumulatively account for the majority of the stake with 32,642,764 kilograms of substances sold in 2017, followed by other crop protection products. Increasing demand for food security in European countries is one of the key factors boosting high consumption of the product in the region.

The industry has been characterized by the presence of a large number of multinationals that operate with a broad portfolio of product holdings. Companies such as Bayer CropScience, Simonis B.V., Syngenta, Nufarm, and FMC Corporation are among the known producers of fungicides and other crop care chemicals globally. These companies have been investing in research & development activities to innovate novel products that caters to a broader market space.

Many multinational companies are focusing on entering into strategic partnerships with regional distributors and be a part of the local agricultural associations to be able to spread awareness regarding the effectiveness of utilizing these substances that eventually lead to the efficient production of various crops. Companies are also engaged in organizing farming meets with local communities to spread knowledge about the benefits of using fungicides and establish stable long-term relationships with the communities. Key companies operating in the global market include:

This report forecasts volume and revenue growth at the global, regional, and country levels and provides an analysis of the latest industry trends and opportunities in each of the sub-segments from 2016 to 2027. For the purpose of this study, Grand View Research has segmented the global fungicides market report on the basis of product, application, and region: