The global gamma knife market size was valued at USD 171.5 million in 2016. Growing prevalence of cancer, brain tumors, & neurological diseases, as well as increasing adoption of gamma knife instruments in surgical centers owing to rising preference for minimally invasive surgeries, are few factors anticipated to boost the market. Moreover, technological upgradation and advancements are also expected to drive the market. 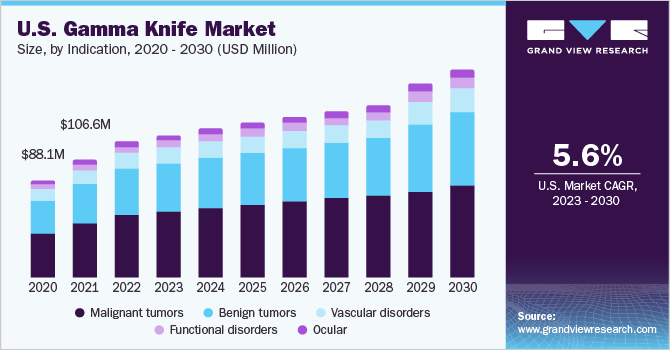 There is a rapid surge in the global incidence of neurological diseases such as brain tumor and epilepsy. According to data published by American Brain Tumor Association (ABTA) in 2017, nearly 7,00,000 people suffer from brain tumor in the U.S., and nearly 80,000 new primary brain tumor cases are expected to be diagnosed every year. Primarily, there are two types of brain tumors: nonmalignant and malignant. Cancer is the second largest cause of death globally, accounting for approximately 8.8 million deaths worldwide in 2015. According to WHO estimates, cancer incidence is expected to rise by 70% over the next two decades.

According to ABTA data, brain & CNS tumors are the third most common type of cancer responsible for the death of population below 40 years of age. Growing usage of gamma knife therapy in neurological treatment owing to its advantages over conventional surgeries is likely to boost the market. Since it is a non-invasive procedure, it provides better safety, causes less damage to surrounding tissues, and offers micro precision while treating the target cells in the brain.

Rising adoption of these instruments in surgery centers owing to rising prevalence of neurological diseases and increasing preference for minimally invasive techniques is also expected to drive the market. Rapidly increasing demand for recently developed Leksell Gamma Knife Icon and increased requirement for upgradation of this technology are also some factors depicting the surging demand for these devices. For example, in 2015, previous gamma knife models U, B, C, 4C, and Perfexion were upgraded to Leksell Gamma Knife Icon by Elekta Instrument, AB. Thus, ongoing evolution in technology is one of the key factors that can be attributed to its high adoption. Adoption of integrated imaging & software, improved workflow, and increase in clinical applications has also led to high usage of these devices in surgical centers.

Moreover, rising prevalence of primary brain tumors is also expected to boost demand over the forecast period. In addition, associated advantages of gamma knife therapy over other treatment alternatives, such as improved accuracy, precision, and treatment safety, are anticipated to boost its demand in surgical centers. Unlike other invasive surgical procedures, it requires no incision, and this is also expected to increase demand.

The ocular disease segment is expected to grow at a lucrative rate of approximately 12.1% over the forecast period. Gamma knife therapy is used for various ocular indications, such as uveal melanoma, advanced glaucoma, eye metastases, age-related macular degeneration, angioreticuloma, vegetative pain, and pseudotumor cerebri. It reduces intraocular pressure and latency of this treatment is low as compared to other treatments. Thus, extended applications of this therapy to treat a wide range of ocular indications are expected to boost demand for the same. 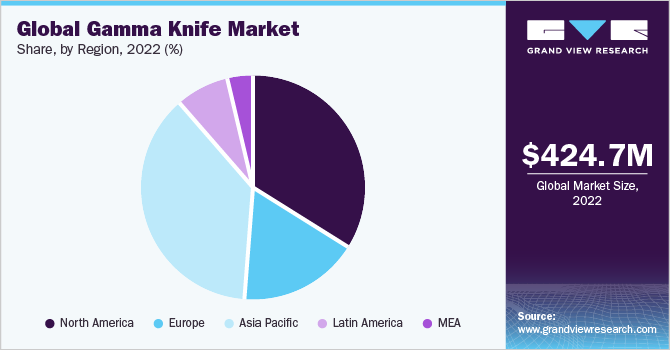 Asia Pacific dominated the overall market in terms of revenue in 2016 with a share of 39.6%. High incidence of brain tumor, rising awareness amongst healthcare professionals regarding noninvasive treatment alternatives such as stereotactic surgeries, high adoption of these instruments in surgery centers, and improving healthcare infrastructure are the key factors responsible for dominance of the region.

In 2016, Japan held the largest revenue share in this region. Japan is considered as the second-largest market in terms of volume. Key factors responsible for its dominance are increasing disease burden, rising prevalence of cancers & brain tumors, and growing adoption of gamma knife instruments in surgery centers. For instance, in October 2016, Elekta’s Leksell Gamma Knife Icon was used for the first time to treat a patient with brain metastases in Japan.

Moreover, rapidly developing economies, improvements in healthcare facilities, and rising geriatric population are some of the factors owing to which Asia Pacific is expected to emerge as the fastest-growing region with a growth rate of 4.1% during the forecast period. In June 2015, Samsung Medical Center acquired the first Gamma Knife Icon system in Asia. Thus, growing adoption of high-cost technologically advanced products in this region is one of the key factors that can be attributed to its largest share and fastest growth over the forecast period.

Gamma Knife is a patent-protected trademark of Elekta AB, because of which the company has a monopoly in the market. With investments in R&D, the company is striving to launch new technologically advanced gamma knives to become a leader in innovation.

This report forecasts revenue growth at global, regional, & country levels and provides an analysis of the industry trends in each of the sub-segments from 2014 to 2025. For the purpose of this study, Grand View Research has segmented the gamma knife market on the basis of indications and region:

How big is the gamma knife market?

What is the gamma knife market growth?

Which segment accounted for the largest gamma knife market share?

b. Asia Pacific dominated the gamma knife market with a share of 40.1% in 2019. This is attributable to a high incidence of brain tumors, rising awareness amongst healthcare professionals regarding noninvasive treatment alternatives.

Who are the key players in gamma knife market?

What are the factors driving the gamma knife market?

b. Key factors that are driving the market growth include the rapid surge in the global incidence of neurological diseases such as brain tumor and epilepsy, rising adoption of the instruments in surgical centers, and product launch.