The global gaucher disease (GD) drugs market size was valued at USD 1.55 billion in 2017. It is anticipated to expand at a CAGR of 1.1% during the forecast period. Gaucher disease is an autosomal recessive metabolic disorder, with an average prevalence of 1 in 100,000 individuals. It is the most common lysosomal storage disorder. 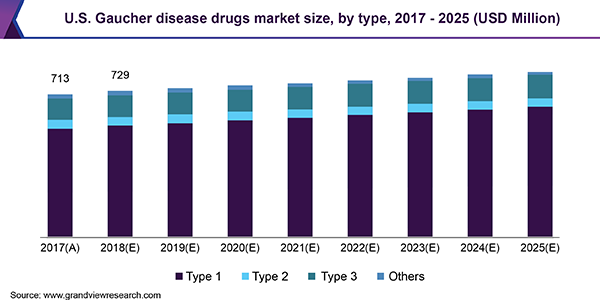 The market is likely to exhibit modest growth during the forecast period. Rising incidence of the disease and increasing efforts for the identification of more GD patients are among the primary growth stimulants for the market.

Lack of drugs in the late-stage pipeline and the rising cost of treatment are limiting the market from realizing its utmost potential. There remains a high unmet need for the development of improved treatments that combat neuronopathic complications at reduced costs and convenient administration schedules. Nevertheless, increasing investments in research and development activities related to rare diseases are projected to shape the future of the market.

Type 1 GD was the largest segment in the market in 2017. The condition does not affect the central nervous system (CNS), making it nonneuronopathic in nature. This disorder can develop anytime between childhood and adulthood and the average life expectancy is 70 years. Type 1 disease represented more than 75.0% of the total market in 2017. The segment is estimated to retain its position until 2025 owing to the increasing adoption of treatment for this type.

Type 2 and 3 are rare forms of this disease. Both these conditions are neuronopathic, causing CNS complications during the disease course. Infants with type 2 GD rarely survive beyond two years, due to lack of treatment and severity of disease progression.

Enzyme replacement therapy (ERT) dominated the Gaucher disease drugs market in 2017. ERT will remain the more preferred therapy through 2025, which can be backed by strong commercial performances of Cerezyme, Vpriv, and Elelyso. Cerezyme was the leading brand by market sales in 2017.

However, ERT is expected to lose shares over the coming years owing to the high cost of therapy and inconvenient dosing schedule. Additionally, ERT is commonly used for type 1 and type 3 to address issues unrelated to CNS as replacement enzymes cannot penetrate blood brain barrier. The treatment landscape is witnessing a gradual shift towards substrate replacement therapy (SRT), led by Cerdelga and Zavesca.

The U.S. commanded the largest share among the seven major markets for Gaucher disease treatment in 2017. The U.S. is anticipated to retain its position until 2025. Rising awareness of treatments, increasing access to treatment, and growing patient pool are among the key factors driving the regional market.

EU5 countries such as Germany, France, and Italy are the key markets for Cerezyme. Japan is anticipated to exhibit the fastest growth due to rising disposable income, increasing disease awareness, and high unmet clinical needs of patients. 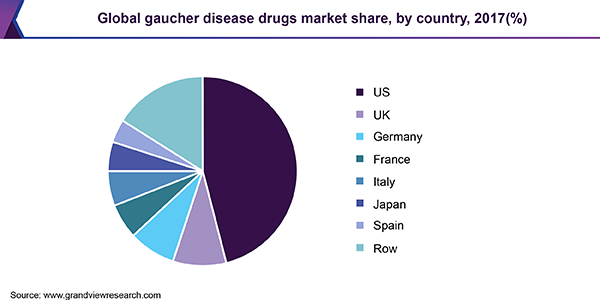 Some of the key players operating in the market are Sanofi Genzyme, Shire, Pfizer, and Johnson & Johnson. Sanofi Genzyme dominated the market with a nearly 65.0% share in 2017. The company will continue to hold prominence in the global arena over the coming years, due to strong sales of Cerezyme and Cerdelga.

Pfizer’s Elelyso competes intensely with Shire’s Vpriv; both enzyme replacement therapies are used for the treatment of GD type 1. Elelyso failed to receive regulatory approval in Europe as Vpriv holds a ten-year market exclusivity in Europe since 2010. The market is driven by collaborations for the development and commercialization of therapeutics. Protalix entered into a licensing deal with Pfizer in 2009 for clinical development and commercialization of Elelyso. Later in 2015, Protalix sold worldwide rights of Elelyso to Pfizer. Additionally, Janssen acquired Actelion in 2017 to add complementary therapeutics and promising late-stage pipeline candidates to its portfolio.

This report forecasts revenue growth at global, regional, and country levels and provides an analysis of industry trends in each of the subsegments from 2017 to 2025. For the purpose of this study, Grand View Research has segmented the global Gaucher disease drugs market report based on type, therapy, and country:

How big is the gaucher disease drugs market?

What is the gaucher disease drugs market growth?

b. Enzyme replacement therapy (ERT) dominated the gaucher disease drugs market in 2017. ERT will remain the more preferred therapy through 2025, which can be backed by strong commercial performances of Cerezyme, Vpriv, and Elelyso.

Who are the key companies/players in gaucher disease drugs market?

b. Some of the key players operating in the gaucher disease drugs market are Sanofi Genzyme, Shire, Pfizer, and Johnson & Johnson. Sanofi Genzyme dominated the market with a nearly 65.0% share in 2018.