The GCC and North Africa coiled tubing market size was valued at USD 636.7 million in 2018 and is and is expected to expand at a Compounded Annual Growth Rate (CAGR) of 4.8% from 2019 to 2025. This high growth is attributed to the increasing adoption of coiled tubing (CT) services for the rising number of oil and gas projects in the region. 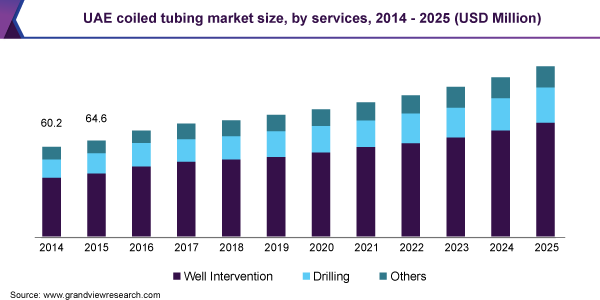 The rising production of oil and natural gas in the Middle East and Africa is a crucial factor supporting the growth of the CT market. Coiled tubing finds various applications in upstream oil and gas activities such as drilling, well cleaning, well completion, and other activities. Moreover, it is a cost-effective technology and is largely preferred for horizontal and highly deviated wells in GCC and North Africa.

The UAE coiled tubing market is expected to witness a strong CAGR of 5.6%, in terms of revenue, from 2019 to 2025. The oil production in the UAE grew significantly from 3,113 thousand barrels per day in 2008 to 3,942 thousand barrels per day in 2018, causing a surge in market growth during the respective period. Future growth is likely to be driven by increasing investments in the country’s upstream oil and gas industry.

In 2018, ADNOC announced an investment of USD 1.4 billion to expand and upgrade its onshore Bu Hasa field. Owing to this investment, oil production from the field is set to rise from 550,000 barrels per day to 650,000 barrels per day by 2020. Such expansion activities often require coiled tubing operations for well intervention to boost productivity, therefore creating a potential for market growth.

Recent trend indicates players in the upstream oil and gas industry focusing their attention on curtailing the cost of production while maximizing their profits. As a result, the demand for CT has experienced a strong boost for the last five years. CT technology enables quicker deployment and retrievability while allowing simultaneous circulation of fluids. Furthermore, the product is highly compact and mobile requires fewer service personnel.

Well intervention service led the GCC and North Africa coiled tubing market and accounted for more than 62% revenue share in 2018. Increasing deployment of cost-effective technologies like CT to maximize oil production from existing wells and to enable production from horizontal wells is the major factor that is expected to contribute to segment growth over the next eight years.

Coiled tubing drilling is expected to witness growth over the forecast period owing to the numerous benefits offered by the service. CT drilling allows for higher speed of operation, improved safety, better underbalanced drilling, and a lower environmental impact.

Logging led the market and accounted for more than 21% of the revenue share in 2018. It is a common operation carried out by operators with the help of CT technology to make a detailed record of geological formations. With the countries in the Middle East and North Africa facing a daunting unpredictable future, the demand for efficient and cost-effective logging tools conveyed through coiled tubing is on the rise.

Pumping operation is yet another significant application of the product. It involves dispersing a fluid to a specific location for cementing perforations or performing chemical washes of downhole tools. The significant advantage of using coiled tubing for cementing perforations is that it avoids potential damage to critical components such as the downhole safety valve.

Logging is a common operation carried out by operators with the help of CT technology to make a detailed record of geological formations. With the countries in the Middle East and North Africa facing a daunting unpredictable future, the demand for efficient and cost-effective logging tools conveyed through coiled tubing is on the rise.

Onshore application led the market and accounted for more than 81% revenue share in 2018. According to the Our Energy Policy Foundation, the GCC and North Africa region is the largest supplier of conventional onshore oil. Moreover, according to the estimates of the Our Energy Policy Foundation, the Middle East and North Africa region is predicted to be among the leading suppliers of conventional onshore gas by 2050. 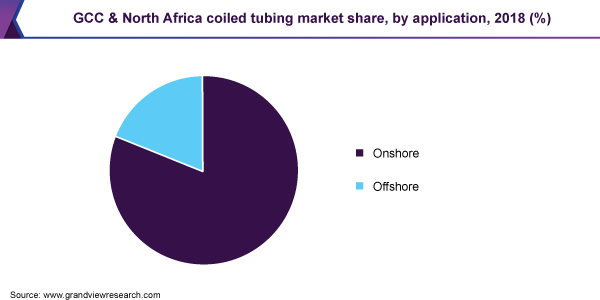 Offshore application is expected to register the fastest CAGR of 5.0% from 2019 to 2025. The growth is attributed to expanding offshore production in Saudi Arabia and the UAE. Saudi Arabia is one of the largest offshore oil producers along with the UAE and Iran. Recent trend indicates expansion projects undertaken by these countries to increase their offshore production.

Saudi Arabia dominated the market and accounted for over 29% revenue share in 2018. Saudi Arabia is a key member of the Organization of the Petroleum Exporting Countries (OPEC). According to the OPEC, oil and gas sector of the country contributes a massive 50% to its GDP every year, thereby facilitating the demand for coiled tubing and its associated services. The number of completed wells in Saudi Arabia increased from 538 in 2014 to 599 in 2018.

The market in Kuwait is estimated to be driven by significant investments announced by the country. For instance, government-owned Kuwait Petroleum Corp. (KPC) announced in 2018 its plan to execute a number of major projects, especially in the oil sector. KPC plans to boost oil production to 4.75 million barrels per day from approximately 3.05 million barrels per day in 2018.

In Libya, production outages and civil unrest are significant factors that currently affect market growth. However, there are signs of optimism as the country’s exports have increased significantly in 2019. There is also an increase in activities from foreign oil companies. For instance, Eni, a company based in Italy, made an announcement in 2018 to buy a 42.5% stake in Libyan oil & gas licenses from British Petroleum.

The market is characterized by suppliers, operators, and state-owned oil companies. The coiled tubing operators in the region are majorly international players with the majority of them headquartered in the U.S.

Product innovation and partnership are the key strategies adopted by the players to sustain their market share in the region. In April 2016, Schlumberger Ltd. completed the acquisition of coiled tubing drilling units from Xtreme Drilling and Coil Services Corp. This strategy was undertaken to develop the overall drilling process and improve the efficiency of coiled tubing through technological integration. Some of the prominent players in the GCC and North Africa coiled tubing market include:

This report forecasts revenue and volume growth at country and regional levels and provides an analysis of the latest industry trends in each of the sub-segments from 2014 to 2025. For the purpose of this study, Grand View Research has segmented the GCC and North Africa coiled tubing market report on the basis of service, operation, application, and region: