The companies in Germany household appliances market manufacture both large and small products. The large ones include products like stoves, ovens, and refrigerators, whereas the small products, include humidifiers, toaster, juicers, and vacuum cleaners to name a few. 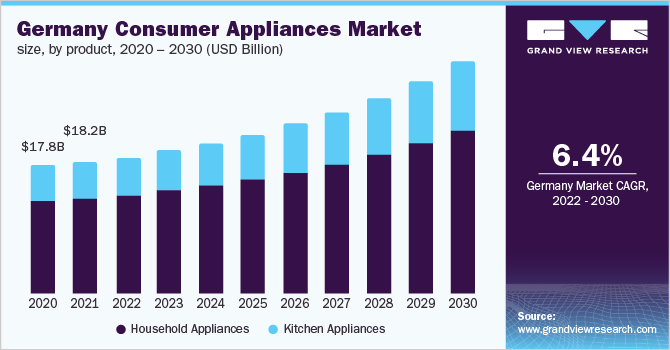 The independent companies playing in this market generate their revenue based on highly effective advertising strategies and streamlined operations. The already established distribution channels such as large retailers have an edge over the newcomers in the distribution network related to this market.

Major appliances frequently require a huge amount of electricity in order to function and are assigned a specific place or location in the household. The most prominent products in the major domestic household appliance industry are refrigerators, freezers, washing machines, air conditioners, and dryers to name a few. These products are also known as white goods. 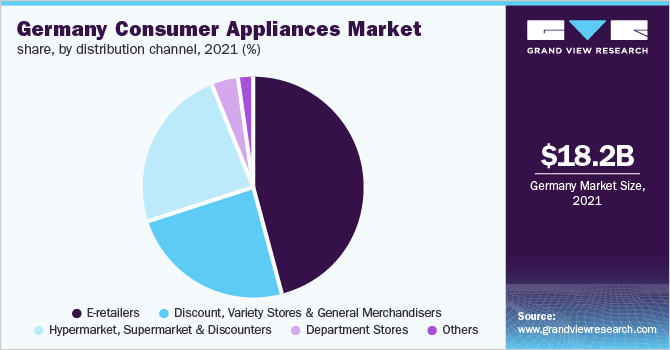 Major household devices have high demand in the market. Now with the increasing demand for major appliances, there is a growing demand for smart products coming to the picture as well. The consumers have now started utilizing modern and technically advanced devices due to the associated convenience and time-saving.

There is a steady growth predicted in this segment for Germany. The factors responsible for this growth could be due to the improving lifestyles of consumers, improvement in the purchasing power, and migration of rural population to the urban areas.

The demand for major household appliances is highly dependent on the income of the consumer, home renovation and remodeling, and replacement of an appliance due to its malfunction or failure. In the coming years, the market for major domestic household products is expected to escalate quickly.

Germany on the other hand due to its high percentage of exports in the foreign lands did not suffer that much, the demand for technologically advanced, smart and energy-efficient appliances in the region is increasing day by day.

The distribution channels for consumer appliances in the region are highly fragmented. The distribution channels for these products in Germany constitute larger diversified retailers, such as Aldi, Tesco, who wish to diversify into the household appliances market. These retailers benefit from scale economies which provide them with greater bargaining power against suppliers. As a result, they are able to be more competitive with prices.

In Germany, there is a greater degree of concentration as large retailers like Metro (Media Markt and Saturn) hold large market shares, thus acting as a greater deterrent to new entrants. E-commerce is booming in the German market with Amazon and Otto being the top e-retailer in the market space.

E-retailers are followed by departmental stores which is the second-highest growing distribution channel in Germany. The German population has demonstrated an inclination towards retail offers and discounts along with a high number of secured e-payment options. Thus, the German e-retail and departmental stores are expected to witness high growth rates during the forecast years.

The household appliances market in Germany is extremely competitive and fragmented due to the presence of both multinational and local players across the country. Furthermore, with the rising competition, vendors have been compelled to introduce innovative products to meet the changing consumer demands and increase their customer base.

The level of competition is expected to intensify during the forecast period with the entry of several new players, price wars, and mergers and acquisitions.

After the 2009 recession and the Eurozone crisis, the European economy was shattered. Germany still remained a bit unaffected from that. Thus, Germany is considered one of the most powerful economies in the world.

The region offers a large number of alternatives to the clients and this is driving the segment growth along with improving economic scenario. Thus, the German economy is expected to witness robust growth over the forecast period.

Amongst large players and new entrants, the large companies have an upper hand in the consumer household appliances market due to economies of scale in production, marketing, and distribution.

The profitability of these individual companies also depends on their ability to generate store traffic, repeat business, as well as effective merchandising.

Few prominent Industry players include LG group, Whirlpool Corporation, Samsung, Panasonic Corporation, Electrolux, Siemens AG, Gorenje group, Arcelik A.S., and Walton Group, etc. Due to the increasing demand for energy-efficient products, these industry participants are actively developing devices with features such as portable connectivity, connectivity with electronic devices, and temperature detection. All these innovations are responsible for the growth of this market.

This report forecasts revenue growth at the country level and provides an analysis of the industry trends in each of the sub-segments from 2014 to 2025. For this study, Grand View Research has segmented the Germany consumer appliances market report based on product type and distribution channels.